by Val James and John Gallagher

Nearly 30 years after his retirement, Val James, the first black American hockey player in the NHL, tells his story. 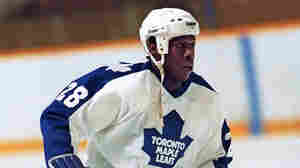 Val James of the Toronto Maple Leafs takes warmup prior to a preseason game against the Boston Bruins at Maple Leaf Gardens in Toronto, Ontario, Canada, in 1986. Graig Abel Collection/Getty Images hide caption

February 26, 2015 • Val James became the first American-born black player in the NHL in 1982. He faced vicious racism, including fans throwing bananas on the ice. After 30 years in silence, he is talking about it now.

Slowly, very slowly, I lifted my bruised backside off the ice, keeping one eye on the half-dozen entrances to the hockey rink. I knew that Timber, the family dog, was somewhere out there in the empty arena, awaiting his chance to again knock me off my skates. The way I figured, if I could learn to skate, despite being repeatedly torpedoed by a burly Doberman pinscher charging out of the darkness, then the checks of opposing hockey players would have no chance of stopping me.

As every new skater quickly learns, I knew that I needed to keep my feet perfectly straight because the slightest shift in my weight would send my skates shooting out in different directions while my rear end went straight down. And I surely didn't need any help getting there from Timber. Hearing nothing coming from the empty seating area, my attention shifted away from kamikaze canines and back to the task of standing upright on the narrow strips of sharpened steel strapped to my feet.

The leather ice skates were a present from my dad. I wasn't supposed to get them until my birthday, which fell on Valentine's Day, the day that gave me my name (a name suggested by my Aunt Maxine), but my old man couldn't wait to see me on the ice so he turned over the skates to me as a Christmas present. Actually, it was even before Christmas, but he knew I had to make up for lost time.

Though not yet 13, I was indeed late getting onto the ice for the first time. Starting younger would have made my stumbles and spills more expected, and less humorous, to onlookers. It would also have meant a shorter falling distance than the six-plus feet that already separated the top of my head from the frozen surface beneath my wobbly feet. There was nothing I could do at this point about the late start, or the countless falls, but at least I was able to collect my beginner bruises in privacy.

By this time, my dad was the operations manager for the Long Island Arena. His jack-of-all-trades position gave him around-the-clock access to its full-sized ice hockey rink. It was here, surrounded only by several thousand empty seats, that I lifted myself off the ice and back onto my skates. Again, and again, and again.

Almost a decade earlier, Henry James had moved our family from Ocala, Florida, to what was then the still sleepy New York City exurb of Suffolk County. Henry and his wife, Pernella, my mom, believed there was more opportunity for their young family in New York than there was in Florida. At that time, during the early days of the Kennedy Administration, Ocala was the Deep South and sadly, Jim Crow was still alive and well. My dad's childhood dream of using his considerable football talents to further his education had been dashed when my mom became pregnant with me, the first of what would be six children for my folks. In an instant, the pigskin plans of my dad's youth became a lifelong question of what could have been.

With hungry mouths to feed, Henry did not hesitate to use his brawn to bring home a paycheck, but a life up North offered a better opportunity for him to be the last of his line to depend solely on the strength of his back to earn a living. So, he and my mom gathered their few belongings and packed up me and my baby sisters Vernice and Rosemary (Henry Jr., Mary Ann, and Bobby Lee were still just twinkles in my daddy's eye) and off we went.

At the outset, the move to New York changed little more than the weather conditions under which my father toiled. And not for the better. He had traded working in the sugar cane fields and block ice houses of Central Florida for equally hard labor on the farms that still filled vast swaths of Long Island. Everyone in the family had to pitch in so I had also spent some summer days working in the same fields, alongside migrant workers whose languages I didn't understand and who were gone once the last crop of tomatoes or potatoes were picked. I was 10 years old before our home on Long Island had electricity or running water. That my folks saw this as an improvement over the quality of life they had down south should tell you plenty about how little there was to be had in those days. After a time doing whatever jobs he could find, including picking crops for pennies, my father came to work at the arena. Like every kid, I grew up believing that my old man had superhuman strength. I would later learn how right I was. Beyond his broad shoulders, my dad was also an excellent mechanic. He could operate and fix any kind of machinery. He was also the hardest-working man I've ever known. He came to the attention of a successful farmer named Ben Kasper. Mr. Kasper owned a farm in Stony Brook and our family moved into a small home on his property. We all pitched in around the farm and my favorite chores included helping my dad care for the horses.

Besides his farm, Mr. Kasper was also the owner of the Long Island Arena. He gave my dad a job as a night watchman at the arena. My father soon took over responsibility for all of the physical operations at the building. He cleaned whatever got dirty and fixed whatever got broken. I would soon come to be my father's trusted assistant and the arena would become my second home.

Tonight, with my dad putting out one fire or another in the building, I slid out to the center of the empty ice. I'd grown up watching the Canadian men who filled the Ducks roster skate on this same ice. I imagined myself as one of them. I could see myself skating quickly up the ice, warding off the bodychecks of opposing defensemen, raising a blizzard of shaved ice as I threw on the brakes, and firing a puck into the net behind the hapless opposing goalie. My folks, no doubt, would be leading the cheers of the crowd. Well, maybe someday. But, for now, I would have to figure out how to shed the folding chair that I was using as a granny walker to steady my balance.

The momentary excitement of getting my skates to coast in the same direction distracted me from noticing the soft padding of feet scrambling up behind me. The James family dog knocked my skates out from beneath me, leaving me, his supposed best friend, lying on my back. I caught a quick glance of Timber the Doberman, seemingly grinning as he beelined back into the darkness of the seating bowl, waiting for his next ambush opportunity.

I could at least take some comfort in knowing that they don't let dogs play ice hockey. So, really, how hard could it be?