A True Story of Obsession, Madness, and the Path to Enlightenment

Title
A Death on Diamond Mountain
Subtitle
A True Story of Obsession, Madness, and the Path to Enlightenment
Author
Scott Carney

An investigative reporter examines the relationship between intense meditation and mental instability through the case of Ian Thorson, a man who died of dehydration and dysentery on a remote Arizona mountain while practicing a bizarre version of Tibetan Buddhism.

NPR stories about A Death on Diamond Mountain 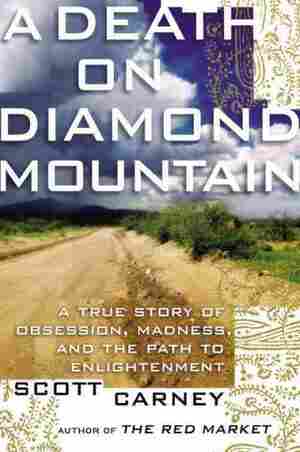 March 29, 2015 • Author Scott Carney's new A Death on Diamond Mountain unravels the complicated paths that led an American Buddhist seeker not to nirvana, but to his death in a cave in the Arizona desert.

March 18, 2015 • Scott Carney's new book unpacks the complicated story of Ian Thorson, who died in the Arizona wilderness after becoming involved with an unorthodox Buddhist group led by a charismatic American monk.

Excerpt: A Death On Diamond Mountain

The promise of enlightenment is not about incremental improvements. Enlighten­ment happens in an instant, with a clear line demarcating the person before from the one after. As if transformed by the grace of God, suddenly the enlightenee realizes the true nature of reality, and the knowledge plants the person forever on a new plane of understand­ing. The mundane world is an illusion. After the first realization, var­ious traditions teach that the enlightenment seeker progresses through a series of different eye-opening experiences until they reach the ultimate final state — call it Buddhahood, or Nirvana, Moksha, or some other type of transcendence. Whatever it is, enlightenment is also an experience. It is a sort of knowledge that is deeply personal and resists any sort of outside verification. That such a transforma­tion is even possible requires a leap of faith. It resists scientific scru­tiny and undercuts the very notion of a material world.

If we assume that it exists, then the actual state of enlightenment poses an interesting problem. What are people supposed to do with the rest of their time on earth once they've gained the ultimate knowledge of the nature of reality? Revered gurus who teach that status and power are meaningless in the ultimate reality nonetheless still have to muck about in the mundane world. They gather follow­ers, build institutions, and dispense knowledge from lofty thrones. Is it hypocrisy when enlightenment simply reproduces familiar hierar­chies? How does a Buddha remain in the world but not of it?

Still, we strive for a spiritual essence because we often feel that we are missing out on a vital part of ourselves. A person can live within the expected parameters of society, get married, raise a child or two, work forty hours a week plus overtime, and fully fund a retirement plan, only to discover at the end of their days that they failed to do anything meaningful with the years they had. There is no silver bul­let for happiness, and living as a cog in a great machine of industrial global capitalism hasn't kept humanity's insomniacs from looking up at the stars and wondering what it all was for.

Humankind has probably always wondered about things greater than itself. "Who am I?" and "What is the meaning of life?" are perhaps the most fundamental questions we can ask. Enlightenment promises answers through mystical experiences and self-examination. Spiritual manuals penned and developed across dozens of different traditions of­fer specific practices that aim to form the body and mind into vessels for transformation. Training regimes take on many forms and can focus on extreme asceticism, or physical rigors that seem absurd. Or even dangerous.

It is as if the extremes are meant to reform a person from the ground up. Life, it turns out, is a preexisting condition. No matter how rigorous the technique, every person starts the spiritual search­ing from his or her own point in space and time. If every journey is different, what does that mean about the nature of transcendence?

Westerners, and perhaps Americans especially, have a conflicted relationship with danger. On one hand our heroes are entrepreneurs and adventurers who risk everything. We relish stories of the business­man who spends his last hundred dollars on a suit so he can pitch a great idea that secures a wealthy investor. We admire the mountaineer who puts it all on the line for a chance to summit an unclimbable peak.

But when risk takers fail in their pursuits, we cluck our tongues and nod knowingly about their hubris. Failure, and perhaps even death, may be the wrong yardstick to evaluate a person's journey.

Ian Thorson was well known only briefly in Buddhist circles, and more so for the unusual circumstances around his death than for any of the actions in his life. Looked at from one perspective, his plunge toward enlightenment is an obvious case of madness. Yet lurking in the shadows of the cave where he died are clues about the idiosyn­cratic reasons Americans have adapted Eastern mysticism to their own ends. More important, Thorson's own self-sacrifice begs the question, How much is too much to risk for a chance to pierce the veil of divinity itself?