After serving time for shooting a man, famous artist Jim Stegner turns to a quiet life in the country. But his rage gets the better of him one day when he sees a hunting guide beating a small horse. Jim kills the guide and turns to painting to make sense of his actions as he evades the police. 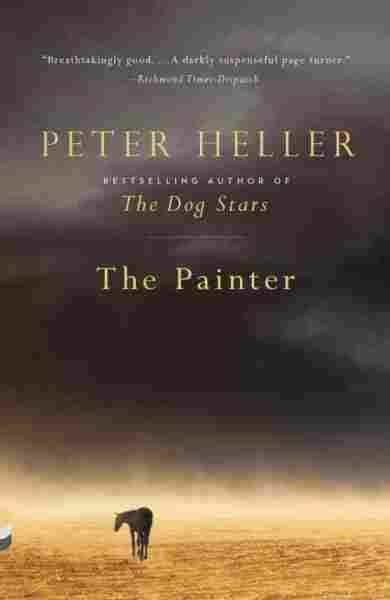 She sat on a stool at the long butcher block counter that separates the kitchen in this one big room. I pushed aside a bunch of sketch paper and charcoal and the fly-tying vise where I'd been tying up some Stegner Killers, invented by yours truly, which the trout couldn't seem to resist the past couple of weeks. I set a mug of coffee on the counter between us, poured myself another.

"What are we doing today?"

"An Ocean of Women. Something I've been thinking about."

"On my way up here from Santa Fe a good friend told me I can't always swim in an ocean of women. I saw it. Me swimming, all the women, the fish. I thought we could give it a try."

"Want an egg with chilies?"

"You just have to make like an ocean. Just once."

She cocked her head the way she does, fixed me with an eye. The light from the south windows brushed a peppering of faint acne pits on her temple and it somehow drew attention to the smoothness of her cheek and neck.

"Stormy or calm?" she said.

She leaned forward on the counter, her breasts roosting happily in her little button top.

"How about choppy and disturbed? Dugar told me yesterday he wants to move to Big Sur." Dugar was her hippy boyfriend. "I'm like how fucking corny. Plus nobody lives there anymore, it's so damn expensive. He read a bunch of Henry Miller. Are you a teenager? I said. You like read a novel and want to move there?"

She stuck out her mug and I refilled it.

"It wasn't a novel it was a memoir, he says. Jeez. He says he is a poet but between you and me his poems are sophomoric. Lately, since he's read up on Big Sur, they are all about sea elephants which he has never seen. I have and they are not prepossessing, know what I mean? They would never even move if they didn't have to eat. I said there is no fucking way I'm moving to Big Sur with the sea elephants, or even the Castroville, which is like the closest place a normal person could afford to live. I mean, do you want to live in the artichoke capital of the world? Be grateful for what you've got right now, where you are right now. Then I unleash the twins."

I am laughing now.

"I'm young," she says. It's a simple statement, incontrovertible, and it stabs me with something like pain in the middle of my laughter.

We begin. Sofia is a champ of an ocean, a natural. I paint fast. I paint her oceaning on her side, arched, facing and away from me, swimming down off a pile of pillows, breaststroke, on her back over the same pillows willowing backwards arms extended as if reaching after a brilliant fish. I paint the fish as big as she is, invoking him. More fish, a hungry dark shark swimming up from the gloom below with what looks like a dog's pink boner. The shark has a blue human eye, not devoid of embarrassment. I am lost. In the sea. I don't speak. Sofia has the rhythm of a dancer and she changes as she feels the mood change.

I love this. I paint myself swimming. A big bearded man, beard going white—I'm forty-five and it's been salt and pepper since I was thirty. I'm clothed in denim shirt and khakis and boots, ungainly and hulking in this ocean of women, swimming for my life and somehow enjoying it. In my right hand is a fishing rod. It looks like the swimmer is doing too many things at once and this may be his downfall. Or maybe it's the root of his joy. My palette is a piece of covered fiberboard and I am swiping, touching, shuttling between it and canvas, stowing the small brush with a cocked little finger and reaching for the knife, all in time to her slowly shifting poses. I am a fish myself, making small darting turns against the slower background rhythms and sway of the swell. No thought, not once. Nothing I can remember.

It is not a fugue state. I've heard artists talk about that like it's some kind of religious thing. For me it's the same as when I am having a good day fishing. I move up the creek, tie on flies, cast to the far bank, wade, throw into the edge of a pool, feel the hitch the tug of a strike bang!—all in a happy silence of mind. Quiet. The kind of quiet feeling that fills you all night as you ready the meal, steam the asparagus, pour the sparkling water and cut the limes. Fills you into the next day.

I wouldn't call it divine. I think it's just showing up for once. Paying attention. I have heard artists say they are channeling God. You have to have a really good gallery to say that. I am painting now without naming any of it, can name it only in memory, and I become aware of a tickling on my neck. Sofia is leaning into me, standing on her tiptoes and watching over my shoulder. I turn my head so that my bearded chin is against her curly head. She is wearing the terry cloth robe she leaves here. She doesn't say a word. She is behind me, but I can feel her smile, a lifting and tautening of the pillow of her cheek against my chin. I was painting more fish, and women, and these crab-like things at the bottom that had men's eyes and reaching claws, and had somehow lost the fact that my model had vanished in the tumult.

"It's been three hours," she whispers. "I'm gonna go." I nod. She tugs my beard once and is gone. Somewhere in there among the ocean of women and the darting fish and a man happily lost at sea I hear wind over water and a heart breaking like crockery and the bleating roar of a retreating dinosaur.