Accessibility links
Beneath the Surface NPR coverage of Beneath the Surface: Killer Whales, Seaworld, and the Truth Beyond Blackfish by John Hargrove and Howard Chua-Eoan. News, author interviews, critics' picks and more.

Killer Whales, Seaworld, and the Truth Beyond Blackfish

by John Hargrove and Howard Chua-Eoan

Title
Beneath the Surface
Subtitle
Killer Whales, Seaworld, and the Truth Beyond Blackfish
Author
John Hargrove and Howard Chua-Eoan

A firsthand account of the lives of captive killer whales by one of SeaWorld's most experienced orca trainers and the star of Blackfish. He argues that their needs are not met in captivity and traces advocacy efforts comparing the lives of free and captive orcas.

NPR stories about Beneath the Surface 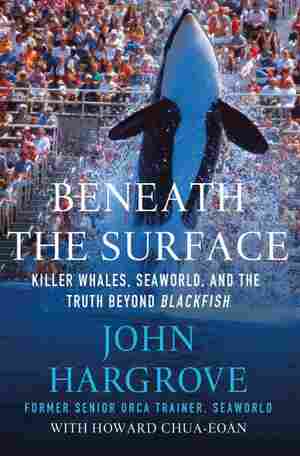 March 23, 2015 • John Hargrove says he left SeaWorld after seeing "devastating effects of captivity" on orcas. His new book is Beneath The Surface. SeaWorld's Christopher Dold says such criticism is "unfounded."

Excerpt: Beneath The Surface

Freya was refusing to follow any of the signals I had taught her. It wasn't as if she didn't know what I wanted. She just wouldn't cooperate — nor did she want any of the fish I had in my hand. She pushed at my torso with her head, propelling me with her mouth, which remained obstinately shut. Her nearly 7,000 pounds of orca muscle directed me farther into the middle of the pool, farther from the safety of the perimeter.

She pulled me underwater but chose not to puncture me before releasing the grip of her jaw. I floated back to the surface, facing her. I had both hands on her but she went under and rolled again. She came at me once more, grasping me in her jaws, pulling me under a second time before releasing me, allowing me to float upward. I knew that this could well become a pattern — I'd seen it happen before when orcas would toy with birds that had strayed into their pools — or when they turned on their trainers. She might come back to drag me under again and again until I became unconscious in the water from the repeated dunking. But I was determined not to die.

I chose to gamble. I asked the trainer on land to use her hand to point Freya back toward me, a basic signal the whales are taught early on. "What? " she asked in disbelief. I shouted back, repeating that she should send Freya to me right away. Timing was of the essence. If the trainer didn't point the whale back fast enough, while Freya was still feeling rewarded for behaving well, still feeling that this episode was turning out positively for her, then Freya was going to become aggressive again. If she did choose to return to that state, her behavior would most likely escalate into something I couldn't get out of. I knew all too well what she was capable of doing to me. I swam to position myself exactly in the middle of the pool to make it clear to her that I wasn't trying to get away.

Freya followed the trainer's direction and swam back to me. She was calm. I asked her to complete three simple behaviors we had taught her and she performed them perfectly. Then, at my request — and as she had learned in earlier sessions — she propelled me through the water, my torso beneath her head, my arms wrapping up around her lower jaw up onto her rostrum, my feet resting on her pectoral flippers. She pushed me forward to the edge of the pool where another trainer waited with a bucket. Once I was by the rim, I stepped up and out, quickly took all the fish available — about 15 pounds' worth — and fed Freya all of it to reward her for cooperating, for letting me go, for performing the pec-push that had brought me back to land. The encounter had taken less than 15 minutes. I looked back at the water, at what could have been the end of my life at the age of 27. My knees were shaking.

Dread and wonderment both are at the heart of my relationship with killer whales. More than a dozen years have passed since that encounter with Freya. Before and since, I have had other experiences—both fearsome and wonderful —with many orcas. These experiences were what I had hoped for in my life. The whales were my passion.

By the time I ended my orca training career in 2012, I was one of the most experienced orca trainers on the planet. I had started as an apprentice at SeaWorld San Antonio in 1993 at the age of 20, becoming a trainer in the corporation's premier facility in San Diego two years later. From 2001 to 2003, in the south of France, I took up the challenge of training orcas that had never worked with humans in the water before. After spending the next five years trying to transfer my passion to other careers, I returned in March 2008 to the one I loved the most, heading back to SeaWorld San Antonio, where I worked until I resigned in august 2012.

I worked with 20 different whales, swimming with 17 of them across two decades. Most are still alive. I loved those charismatic and complex beings. I can't quite call them animals; the whales are beings just as we are beings. And these orcas have been a more intimate part of my life than most humans. Dr. Ingrid Visser, who has spent many years studying the killer whales of New Zealand, told me, "If you have a question about orcas, frame it as if you were asking about people." The answer, she said, would often be surprisingly similar.

I had worked hard to get in peak physical form to be able to qualify to work and swim with killer whales, and the years I spent with the whales were a privilege. I will treasure them forever. It is a sentiment that I share with almost every person who has ever reached the highest ranks of SeaWorld's orca trainers. We were dedicated to working and performing with the whales; and we steadfastly believed we were doing what was best for the orcas. Our lives were so intertwined that we felt as if we could channel what the whales were feeling. We had a special kind of language, having developed a rigorous though imperfect form of communication based on the scientific notions of behavioral psychology to condition the whales to perform for the thousands who showed up for each show at SeaWorld's Shamu Stadium. No one else on earth could even pretend to read a whale's mind. We did. And we all knew what a great privilege it was — because it was extended to us by the whales themselves. Each day, each captive whale had the choice to allow us in — or to shut us out.

We were a small band of brothers and sisters: there have been perhaps no more than 20 top-ranked trainers at any one given time across the three SeaWorld parks during the company's half-century of existence. We spent as much time with each other as we did with the whales — competing with each other as we tried to push our careers ahead but also collaborating for the good of the orcas in our charge. I am not a scientist and, while this book will delve into the natural history of killer whales — into how they live in the wild — my story involves the lives of orcas seen through the eyes of the men and women who trained them to perform at SeaWorld. We swam with them. We kept them healthy. We saw them give birth. We watched them suffer. We suffered with them. We looked them in the eye and caught a glimpse into their souls. Sometimes, we saw joy. Sometimes, we saw things that were terrifying.

I can never walk back into a marine park where any of the whales I worked with live — not into the three SeaWorld facilities in the United States, not into the one in Spain that the corporation helps to manage, nor into the one in France where I worked for two years and which does business with the multibillion-dollar American theme park empire. It's not just because of my conviction that SeaWorld's treatment of its orcas is wrong—though that is what I now believe. What prevents me from returning is my awareness of the emotional distance— the knowledge that even if I did enter the park, I would never truly be near the whales. I was so close to them, physically and spiritually. Of the 30 living whales that SeaWorld currently owns, I've worked with 12 of them. Of the 12, I did waterwork with 10. To return as a visitor to a theme park, to see them presented in a show as if I had never been part of their lives, would be too painful to endure.

I had a boyhood dream that came true, almost magically, like something out of a children's storybook. In time, I discovered that the gorgeous dream was only part of the story, that the bigger story was more of a nightmare, for myself and for the whales. I have lost the whales; they are no longer in my life, and that breaks my heart. But I have gained something else: a new path that is becoming clearer as time passes. I want to remember the whales and share them with you.

I want you to know what I have learned so we can save them together.

Excerpt adapted from Beneath The Surface by John Hargrove with Howard Chua-Eoan. Published by Palgrave Macmillan Trade, a division of St. Martin's Press 2015. All Rights Reserved.