One Nation Under God

One Nation Under God

The editor of the award-winning White Flight reveals the role of mid-20th-century corporate titans and evangelical activists in systematically creating the pervasive myth that America has always been a fundamentally Christian nation.

NPR stories about One Nation Under God 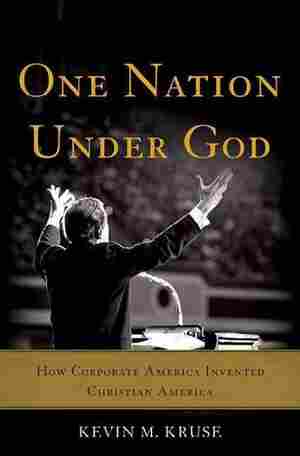 March 30, 2015 • Kevin Kruse's book looks at how industrialists in the '30s and '40s recruited clergy to preach free enterprise. And under the Eisenhower administration, Christianity and capitalism moved center stage.

Excerpt: One Nation Under God

The inauguration of President Dwight D. Eisenhower was much more than a political ceremony. It was, in many ways, a religious consecration.

Though such a characterization might startle us today, the voters who elected Eisenhower twice by overwhelming margins would not have been surprised. In his acceptance speech at the 1952 Republican National Convention, he promised that the coming campaign would be a "great crusade for freedom." As he traveled across America that summer, Eisenhower met often with Reverend Billy Graham, his close friend, to receive spiritual guidance and recommendations for passages of Scripture to use in his speeches. Indeed, the Republican nominee talked so much about spirituality on the stump that legendary New York Times reporter Scotty Reston likened his campaign to "William Jennings Bryan's old invasion of the Bible Belt during the Chautauqua circuit days." On election day, Americans answered his call. Eisenhower won 55 percent of the popular vote and a staggering 442-to-89 margin in the Electoral College. Reflecting on the returns, Eisenhower saw nothing less than a mandate for a national religious revival. "I think one of the reasons I was elected was to help lead this country spiritually," he confided to Graham. "We need a spiritual renewal."

The inaugural ceremonies on January 20, 1953, set the tone for the new administration. Some of Eisenhower's supporters tried to get Congress to designate it a National Day of Prayer, but even without such an official blessing, the day still had all the markings of one. In the past, incoming presidents had attended religious services on the morning of their inauguration, but usually discreetly. Before Harry Truman's inauguration in 1949, for instance, the president, his family, and a few cabinet officials made an unannounced visit to St. John's Episcopal Church for a brief fifteen-minute service, with only a few regular parishioners witnessing the moment. Eisenhower, in contrast, turned spirituality into spectacle. At a transition meeting with his cabinet nominees, he announced that they and their families were invited to a special religious service at National Presbyterian Church the morning of the inauguration. "He added hastily as an afterthought that, of course, no Cabinet member should feel under pressure to go to the Presbyterian services," remembered Sherman Adams, his chief of staff; "anybody could go instead to a church of his own choice." But given a choice between worshiping with the president or worshiping without him, almost all chose the former. More than 150 supporters joined the extended Eisenhower clan for the services. The event had been publicized widely in the press, so the attendees arrived to find the church completely full; a crowd of eight hundred more huddled outside in the morning chill. This presidential prayer service had echoes across Washington. All of the city's Catholic churches opened for the occasion, while many Jewish and Protestant houses of worship did the same, acting on their own initiative. St. John's Episcopal, for instance, offered a series of prayer services for the public, every hour on the hour. The Washington Post reported that even the city's first mosque, still under construction, would nevertheless be open "for all Moslems ... who wish to invoke Allah's aid for the Republican administration."

Public prayer highlighted the official inaugural festivities as well. Chief Justice Fred Vinson, on hand to deliver the oath of office, welcomed the religious emphasis. When he had risen to the high court a few years earlier, the Kentucky Democrat had taken part in a "consecration ceremony" sponsored by a new prayer breakfast group in the Senate. There, before a gathering of more than two dozen senators and the attorney general, the chief justice of the United States testified about "the importance of the Bible being the Book of all the people and how the whole superstructure of government and jurisprudence is built upon it." Now Vinson would watch Eisenhower do the same. As the chief justice delivered the oath, the new chief executive's left hand rested not on one Bible but on two, each opened to a selection suggested by Graham. A black leather-bound family Bible was opened to 2 Chronicles 7:14, a passage Graham regularly cited to urge a national religious revival: "If my people, which are called by my name, shall humble themselves and pray, and seek my face, and turn from their wicked ways; then I will hear from heaven, and will forgive their sin, and will heal their land." The second, a Masonic Bible used by George Washington at the first presidential inauguration, lay open to show a similar call for revival in Psalm 127: "Except the Lord build the house, they labour in vain that build it; except the Lord keep the city, the watchman waketh but in vain."

Immediately after his oath, in his first official words as president, Eisenhower asked the 125,000 Americans in attendance — and the estimated seventy million more watching live on television — to bow their heads so that he might lead them in "a little private prayer of my own" he had composed that morning. "Almighty God," Eisenhower began, "as we stand here at this moment my future associates in the Executive branch of Government join me in beseeching that Thou will make full and complete our dedication to the service of the people in this throng, and their fellow citizens everywhere." The president's prayer caused a minor sensation — not because of anything said in it but simply because it had been said. A half mile from the Capitol ceremonies, crowds on Pennsylvania Avenue listened to the prayer over portable speakers strewn along the streets. "There was an electric something," an observer noted, "that seemed to summon the waiting multitudes to their knees." The "inaugural prayer" was quickly reproduced in countless newspapers and magazines. An oilman from Shreveport, Louisiana, printed the prayer as a pamphlet, with the cover showing the smiling president on the left, the American flag on the right, and the cross directly above. At the bottom ran the oilman's own prayer: "God Save Our President Who Saved Our Country and Our World!"

Eisenhower's prayer was only the beginning of the day's spiritual emphasis. "Religion was one of the thoughts I had been mulling over for several weeks," he later reflected. "I did not want my Inaugural Address to be a sermon, by any means; I was not a man of the cloth. But there was embedded in me from boyhood, a deep faith in the beneficence of the Almighty. I wanted, then, to make this faith clear." Accordingly, his address was rife with references to the religious beliefs of the president and the people he sought to lead to revival. "We who are free must proclaim anew our faith," Eisenhower insisted. "This faith is the abiding creed of our fathers. It is our faith in the deathless dignity of man, governed by eternal moral and natural laws." Once he finished his speech, the new president retreated to a reviewing stand to watch the inaugural parade. The five-hour procession offered several remarkable sights for the record television audience, including a trio of elephants from Ohio and a cowboy named Monte Montana who threw a lasso around the president's head as Secret Service agents glowered nearby. For many viewers, though, the most memorable part of the parade was the very first float. Anointed "God's Float" by its creators, it consisted of a replica of a house of worship with large photos of churches and synagogues arrayed along the sides. Two phrases appeared in grand Gothic script at each end: "Freedom of Worship" and "In God We Trust."

The inauguration and its immediate aftermath established the tenor for Eisenhower's entire presidency. On the first Sunday in February, he became the first president ever to be baptized while in office, taking the rite before the congregation of National Presbyterian Church. That same night, Eisenhower broadcast an Oval Office address for the American Legion's "Back to God" ceremonies, urging the millions watching at home to recognize and rejoice in what the president said were the spiritual foundations of the nation. Four days later, he was the guest of honor at the first-ever National Prayer Breakfast, which soon became an annual tradition. The initial event was hosted by hotel magnate Conrad Hilton, with more than five hundred dignitaries, including several senators, representatives, cabinet members, ambassadors, and justices of the Supreme Court, taking part. Fittingly, the theme was "Government Under God." The convening pastor led a "prayer of consecration" for Eisenhower, who then offered brief remarks of his own. "The very basis of our govern- ment is: 'We hold that all men are endowed by their Creator' with certain rights," the president asserted. "In one sentence, we established that every free government is embedded soundly in a deeply-felt religious faith or it makes no sense." Eisenhower made clear that he would personally turn those words into deeds. The next day, he instituted the first-ever opening prayers at a cabinet meeting. (It took some time before this innovation became a natural habit. His secretary recalled Eisenhower emerging from a cabinet session only to exclaim: "Jesus Christ, we forgot the prayer!")

Excerpted with permission from One Nation Under God: How Corporate America Invented Christian America by Kevin Kruse. Available from Basic Books, a member of The Perseus Books Group. Copyright 2015.