Accessibility links
Between You & Me NPR coverage of Between You & Me: Confessions of a Comma Queen by Mary Norris. News, author interviews, critics' picks and more.

Confessions of a Comma Queen

A New Yorker copy veteran presents humorous descriptions of some of the most common and vexing errors in language and usage, drawing on examples from classic literature and pop culture while sharing anecdotes from her work with celebrated writers.

NPR stories about Between You & Me 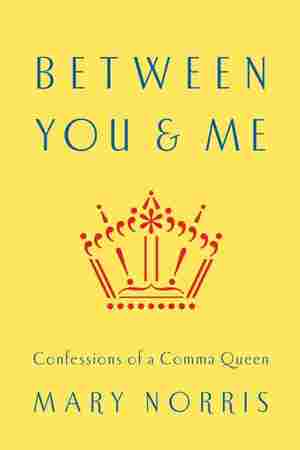 Memoir, Perfectly Punctuated In 'Between You & Me'

April 4, 2015 • Mary Norris has been a copy editor at The New Yorker since 1978. She dispenses some of the collected grammatical wisdom of those decades in a new book, Between You & Me (and it is "me," not "I").

Excerpt: 'Between You & Me'

CONFESSION OF A COMMA QUEEN

Let's get one thing straight right from the beginning:

I didn't set out to be a comma queen. The first job I ever had, the summer I was fifteen, was checking feet at a public pool in Cleveland. I was a "key girl"—"Key personnel" was the job title on my pay stub (I made seventy-five dollars a week). I never knew what that was supposed to mean. I was not in charge of any keys, and my position was by no means crucial to the operation of the pool, although I did clean the bathrooms.

Everyone had to follow an elaborate ritual before getting into the pool: tuck your hair into a hideous bathing cap (if you were a girl), shower, wade through a footbath spiked with disinfectant that tinted your feet orange, and stand in line to have your toes checked. This took place at a special wooden bench, like those things that shoe salesmen use, except that instead of a miniature sliding board and a size stick for the customer's foot it had a stick with a foot-shaped platform on top. The prospective swimmer put one foot at a time on the platform and, leaning forward, used his fingers to spread out his toes so that the foot checker could make sure he didn't have athlete's foot. Only then could he pass into the pool. I have never heard of foot checkers in any city besides Cleveland, where their presence was taken for granted, and can only speculate that at one time there was an outbreak of athlete's foot on the shores of Lake Erie, and a crusading public health official, determined to stamp it out, had these benches knocked together and hired people to sit at them, checking feet.

I am not particularly nostalgic about my foot-checking days. Nor do I wish to revisit my time at the Cleveland Costume Company, where I worked after graduation. I had gone to Douglass College, the women's college of Rutgers University, in New Brunswick, New Jersey, and I had returned ignominiously to the nest because I couldn't think of anything better to do. The costume company was fun for a while: renting props to local TV shows, putting together costumes for summer-stock productions of Restoration drama. On my first day, a young black woman, Yvonne, was setting Santa beards in rollers so that they would be curly by Christmas. An older black woman worked in the kitchen, starching and ironing the clown ruffs and nuns' wimples. She changed from street shoes into bedroom slippers when she got to work, and said things like "My dogs is killin' me." The boss was Mrs. Pizzino ("P as in Peter, I, double Z as in zebra, I, N, O," she would say, spelling her last name out over the phone), and under her tutelage I learned to repair big papier-mâché animal heads and not to paint the panther's eyes blue.

Halloween had always been my favorite holiday, and I borrowed a costume from work—a hooded green corduroy robe like something a fairy-tale dwarf would wear—and threw a party in my parents' basement. It featured copious amounts of alcohol and candy. One of the guests came as a penis; another as a Ku Klux Klansman. Initially, I was sorry that Yvonne declined my invitation, but not anymore. When the party was over, I decided that my career at the costume company had peaked and I was going to quit. Accordingly, I slept in the next day, and was awakened by my mother, saying that Mrs. Badina was on the phone. (Mom never got Mrs. Pizzino's name straight.) I explained to my boss that now that Halloween was over I thought I'd quit. Her response was "Get in here." There is just as much to do at a costume company after the holiday as there is in the weeks leading up to it. I stuck it out through the Christmas season, and, after all the Santa suits had been cleaned and put away and Yvonne was rolling up the beards again, I started looking around.

I called a local dairy and asked whether there were any openings for milkmen. I had had a fantasy for years about owning a dairy farm. I liked cows: they led a placid yet productive life. I'd gone to Rutgers partly because it had a renowned department of dairy science. I'd taken one mini-course in how to judge dairy cattle and learned the differences between Holsteins, Guernseys, Jerseys, and Brown Swiss cows. "We've never had a lady drive a milk truck, but there's no reason not," a man said, and he agreed to let me come in and talk. The plant was all gleaming stainless steel, heated milk undercut with a bracing whiff of ammonia. It was the first time I could be completely honest in a job interview. I didn't have any experience, but I was sincerely interested in the dairy industry.

On a frigid morning in February, I went along with a milkman on a route in Fairview, a suburb west of Cleveland. The milk truck had two sets of pedals, one with the standard three for a stick shift, for driving sitting down when you were going long distances, and the other for driving standing up, when you were hopping between houses. This second set had just two pedals: the clutch and the brake were combined in one. When you needed to slow down or shift gears, your left foot squeezed down through the clutch to the brake on one pedal, and you had to lift your right foot off the accelerator and balance on one heel.

The route was available, and they gave me the job. A generous friend lent me her car for a crash course in how to drive a stick shift. The foreman who was training me noticed that I handled the truck better standing up than sitting down. The seat was designed to fold up and swing around to the side, where it could be stowed out of the way. All that folding and swinging had loosened it up, so when I turned the steering wheel the seat swung in the opposite direction, and I would find myself facing out the side instead of in the direction the truck was going, as if I were on some disorienting amusement-park ride. At the foreman's suggestion, I was driving back to the plant standing up, on Brookpark Road, out near the airport. I went through an underpass, on the far side of which was a traffic light, and I was almost under it when I saw that it was red, so I had to slam on the brake and try to steer while gripping the steering wheel and balancing on one heel, and I lost control. The truck crashed into a concrete barrier. The foreman was thrown into the ice-cream freezer, and I landed on the floor. He was OK. I was bruised and humiliated. The plant had its own tow truck and mechanic, and I rode back with the mechanic, wanting to bum one of his unfiltered Camels. The foreman got blamed, because the boss said he shouldn't have had me driving standing up, and I got another chance.

I had some really nice customers—there was a couple who bought only a pint of half-and-half once a week for their coffee—and I had some deadbeats, the kind of people who knew that if they ever paid their bill in full you'd drop them. There was a man who rehabilitated coin changers, those contraptions with barrels for quarters, nickels, pennies, and dimes; we wore them on our belts. The houses had milk chutes, or boxes beside the door, or you put the milk between the storm door and the inside door, and shouted "Milkman!" I wasn't a man, but I didn't like the word "lady"—it seemed not feminist—so I wouldn't holler "Milklady!" and "milkmaid" was a little too fanciful. I settled for "milkwoman," which was a bit too anatomically correct and made me sound like a wet nurse. I muffled the last syllables.

I had half a mind to stay in Cleveland and try to marry the boss's son (he raised beef cattle), but I gave up the milk route to accept a fellowship at the University of Vermont, where I had applied, too late, the year before. While pursuing a -master's degree in English, I kept up my interest in the dairy industry—UVM had an agricultural school and a famous ice-cream program. I even learned to milk cows, though they were university cows (Holsteins—big producers). My first job once the academic life had worn me down was packaging mozzarella on the night shift in a cheese factory. A team of women, wearing white rubber aprons, yellow rubber gloves, green rubber boots, and hairnets, pulled bricks of mozzarella out of vats of cold salt water, labeled them, bagged them, sealed the bags, boxed the cheese, and stacked the boxes. I had a secret yen to operate the -forklift truck. The Popeye-style muscles I developed in my forearms atrophied soon after I moved to New York. Sometimes, on the sides of trucks making deliveries to pizzerias, I still recognize the logos of cheese wholesalers—Vesuvio, Cremona, in red, white, and green—whose labels we slapped onto loaves of mozzarella in Vermont. I don't suppose that I will ever belong to the Brotherhood of Teamsters again (though I maintain my chauffeur's license) or have calluses on my palms from handling a stainless-steel carrier full of half-gallon milk cartons.

Excerpted from Between You & Me: Confessions of a Comma Queen by Mary Norris. Copyright 2015 by Mary Norris. With permission of the publisher, W. W. Norton & Company, Inc. All rights reserved.