Accessibility links
The Brothers NPR coverage of The Brothers: The Road to an American Tragedy by Masha Gessen. News, author interviews, critics' picks and more.

The Road to an American Tragedy

Traces the lives of the two immigrant brothers responsible for the Boston Marathon bombing, describing the tension between assimilation and alienation that resulted in a split in identity and gave them a deadly sense of mission.

NPR stories about The Brothers 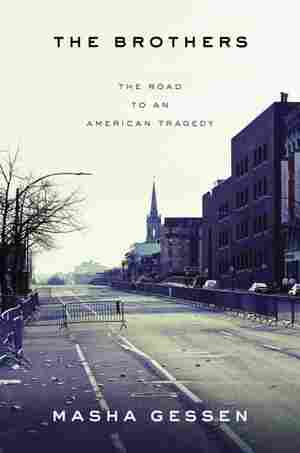 April 7, 2015 • As jurors deliberate whether to convict Dzhokhar Tsarnaev, Masha Gessen says there are still some "gaping holes" in the case. Her new book is The Brothers.

In Dagestan, Tamerlan remet his cousin Magomet Kartashov, who just a few months before had launched a group that some people perceived as nebulous and others as menacing; it was probably both. The Union of the Just, to which Tamerlan discovered he belonged virtually by birthright, was a quintessential Dagestan organization: a group of self-important young men who trafficked mostly in words and yet balanced unmistakably at the edge of constant and extreme danger.

The man with whom Tamerlan connected most closely was not his cousin Magomed Kartashov but Kartashov's deputy Mohammed Gadzhiev. Gadzhiev was Tamerlan's age; he was a snappy dresser, though not as flashy as Tamerlan; he had about him the confidence of an extremely good-looking and remarkably well-spoken man: he and Tamerlan were of a kind, and they hit it off instantly when Kartashov introduced them at a friend's wedding in the spring of 2012. "Meet my American relative," he said to Gadzhiev, and from that point on the two men saw each other several times a week.

They talked. Tamerlan had things to tell Mohammed about America. He said it was a racist country and a deeply divided one: there was a giant gap between the rich and poor. Foreign policy was as xenophobic and as shortsighted as Mohammed had suspected—as bad, in fact, as what he had heard on Russian television, which could be presumed to lie about everything except this. Morally, too, America was in decline. Mohammed had suspected as much, but he was pleased to have his general impressions confirmed and elaborated—and Tamerlan turned out to be a good storyteller, capable of supporting his passionate generalizations with carefully drawn detail. He described his friends, their struggles, the crooked cops of Watertown—he talked so much about this town that Gadzhiev was sure that was where he lived—and, for the first time in his life, Tamerlan got to feel like an expert.

Gadzhiev could ask questions for hours, and his interest and trust in Tamerlan's knowledge never wavered. He even accepted the positive things Tamerlan had to say about America. Tamerlan said there was freedom of speech, it really was a country open to all sorts of people—and it would even give them an education, such as the one Tamerlan's beloved younger brother was now obtaining, thanks to a city scholarship.

They talked about Russia as well, and concluded that its racism, religious persecution, and propensity for manufacturing criminal charges against undesirables made the two countries substantially similar. Russia's foreign policy was better—at least it did not support either Israel or the secular forces in the Arab world—but the deep-rooted corruption inside the country more than made up for this comparative advantage over the United States. "I refuse to choose between two kinds of fecal matter," Gadzhiev concluded.

On topics other than the United States, Tamerlan got little credit. Gadzhiev found his knowledge of the Koran cursory at best. He appreciated that Tamerlan claimed being a Muslim as his primary identity, but criticized him for vague statements and uncertain ideas. "If your goal is to fight injustice and promote God's law in the world, then you have to achieve clarity," Gadzhiev would say. "As long as your ideas are hard to comprehend, your actions, too, will be dispersed. You have to be specific." Gadzhiev introduced Tamerlan to the concept of intention, essential to the interpretation of the Koran. "You must know that your actions are right even if you will never see the results of your actions—then you must trust that one of your descendants will see them in the future."

Gadzhiev saw his friend as a bit of a baby. Tamerlan stood out in Makhachkala. Some days he wore a long Arabic-style shirt of the sort rarely seen in Dagestan, slicked his hair back with peanut oil, and lined his eyes with kohl. Other days, he put on regular trousers with brightly colored sneakers, and this looked as foreign as his ersatz Middle Eastern getup. Gadzhiev himself dressed stylishly, but in keeping with the understated ways of local men: he wore dark-colored T-shirts and trousers over neutral flip-flops.

When Gadzhiev reprimanded Tamerlan for sticking out too conspicuously, his American friend seemed to take it as a compliment. Indeed, he regarded all expressions of interest as both complimentary and wondrous. One time a girl at a party slipped him a scrap of paper with her phone number written on it and he showed it around to his friends, asking aloud what it was they thought she wanted. Gadzhiev and others found this indiscretion both regrettable and endearing: Tamerlan's cockiness had a way of coming off as innocent, and in his friends it produced a feeling of benign condescension.

After the Boston marathon bombing, there would be much speculation about whether Tamerlan had been "radicalized" in Dagestan. The question was not unreasonable. Dagestan presented many opportunities for a young man in search of a radical future. He could have joined the struggle in Syria; dozens and possibly hundreds of men were recruited in Dagestan around the time he was there. If he was a budding jihadist opposed to U.S. foreign policy, the Syrian opportunity would have seemed perfect—but Tamerlan did not take it. Even more obvious, he could have joined the guerrillas in the forest. He did not, though Kartashov later told the secret police he had talked about it—and Kartashov felt he had talked him down. There were rumors, later, of Tamerlan's making contact with William Plotnikov, who had emigrated from Russia to Canada at the age of fifteen, become a boxer, and gone to Dagestan to join the Islamic insurgency. There does not, however, appear to have been any connection between the two, aside from the eerie coincidence of superficial details of biography. Plotnikov died in the typical blaze of gunfire in a Russian security operation in July 2012; ultimately the only people who linked him to Tamerlan were unnamed Russian secret-police operatives who leaked the information to an enterprising but notoriously unreliable Russian newspaper. The same unnamed sources claimed Tamerlan was connected to another insurgency fighter, Mahmud Nidal, who, by the time this unsubstantiated leak appeared, had been killed in another firestorm, in May 2012.

In the end it seems that most of what Tamerlan did during his six months in Dagestan was talk. Talking—and having someone not only listen to what he had to say but also take it seriously enough to question and criticize and try to guide him—was a radically new experience for him. Feeling, for the first time in his life, like he belonged most certainly entailed a kind of radicalization, a fundamental shift in the way he perceived the world and himself in it—but that is just as certainly not what anyone has meant by suggesting that Tamerlan might have been radicalized in Dagestan.

Two months after Tamerlan's departure, the Union of the Just staged a protest that criticized not only the Russian regime but also American foreign policy. Shocking onlookers in Kizlyar, the protesters burned a United States flag—a gesture that had never before been seen in Dagestan. Months later, when Gadzhiev was interviewed by men representing the FBI, he would taunt them by recalling that protest. One could say, if one were so inclined, that it was Tamerlan Tsarnaev who had radicalized the Union of the Just.

Reprinted from The Brothers: The Road to an American Tragedy by Masha Gessen by arrangement with Riverhead Books, a member of Penguin Group (USA) LLC. Copyright 2015 by Masha Gessen.