The author of Born to Run describes his investigation into ancestral training techniques that have enabled Mediterranean athletes to achieve extraordinary levels of strength and fitness. 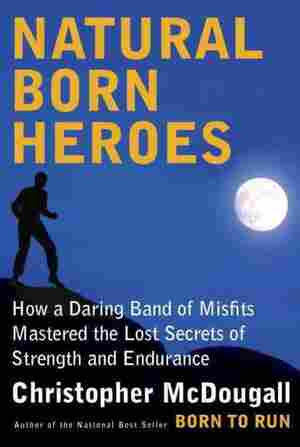 April 16, 2015 • Writer Christopher McDougall digs into the exploits of Britain's legendary World War II commandos to form a new definition of heroism: It's a skill you can learn, if you push your body to the limit.

You've got to put yourself in the Butcher's shoes.

You're General Friedrich-Wilhelm Müller, one of two German commanders on the Greek island of Crete. Hitler is worried that something terrible is about to happen right under your nose, something that could severely damage the German offensive, but you've got it all under control. The island is small and your manpower is huge. You've got 100,000 seasoned troops, with search planes prowling the mountains and patrol boats monitoring the beaches. You've got the Gestapo at your service, and you're scary enough to be called the Butcher. No one is going to mess with you.

And then you wake up on the morning of April 24, 1944, to discover the other you is gone. Your fellow commander, General Heinrich Kreipe, has disappeared. There's no hint of foul play: no shots fired, no bloodshed, no signs of a scuffle. Stranger yet, the general vanished from somewhere around the capital, the most heavily guarded corner of the island. Whatever happened, it happened right in front of the general's own men. Kreipe was no toy soldier, either; he was a serious hard case, a Great War survivor with an Iron Cross who'd battled his way up through the ranks and just transferred in from the Russian front. He had a personal security force and an armed driver and a villa surrounded by attack dogs, razor wire, and machine-gun posts.

So where was he?

All the Butcher knew was this: shortly after 9 p.m., General Kreipe left his command base and drove into the center of town. It was Saturday, so foot traffic was thicker than usual. Troops from outlying garrisons had been bused in for a movie, and the streets were jammed with strolling soldiers. The movie had just let out; the Butcher knew this because hundreds of soldiers had seen the black sedan with the general's flags on the bumper inching its way through the streets. General Kreipe's driver had to honk them out of the way, even rolling down his window at one point to holler, "GENERAL'S WAGEN!" Kreipe was right there in the front passenger seat, nodding his head and returning salutes. Every road in every direction at every half-mile was guarded by checkpoints. The general's car passed Gestapo headquarters and funneled through the last checkpoint, the narrow opening at the Canae Gate. "Gute Nacht," the general's driver called. The sedan slid beneath the crossbar and exited the city.

Early the next morning, the general's car was discovered on a scruff of beach just outside the city. The general and his driver were gone, as were the eagle flags from the front bumper. Around the car was a weird scattering of rubbish: an Agatha Christie novel, Cadbury milk chocolate wrappers, a bunch of English "Players" cigarette butts, and a green British commando beret. On the dashboard was a letter. It was addressed to "The German authorities on Crete" and said that Kreipe had been captured by a British raiding force and taken off the island. The letter was ceremonially sealed with red wax and signet rings, and included a jaunty postscript:

We are very sorry to have to leave this beautiful motor car behind.

Something didn't add up. The general must have been grabbed after he left the city, but his car was found only a twenty-minute drive away. So within that brief window, these mystery men had executed an ambush, disarmed and subdued two prisoners, smoked a pack of cigarettes, shared some snacks, lost a hat, melted wax, and what else — browsed a paperback? Was this an abduction or a family vacation? Plus that stretch of coast was floodlit by klieg lights and patrolled by planes. Why would seasoned commandos choose the most exposed part of the island as their extraction point? From that beach, their escape boat would have had to head north into hundreds of miles of German-occupied waters, making them sitting ducks as soon as the sun came up.

Whoever did this was trying very hard to look very British, very cool and under control. But the Butcher wasn't buying it. He was in the midst of his second World War and to his knowledge, no general had ever been kidnapped before. There was no precedent for this sort of thing, no tactics, so they had to be making it up as they went along. Which meant that sooner or later, they'd make a blunder and fall right into his hands. Already, they'd made a big mistake: they'd badly underestimated their opponent. Because the Butcher had seen through their feints and realized two things:

They were still on his island, and they were running for their lives.


On a spring morning in 2012, I stood where the general's car was found, wondering the same thing as the Butcher: where could they possibly go?

At my back is the Aegean Sea. In front, there's nothing but a snarl of chest-high brambles leading to a sheer cliff. In the far distance and cutting the island in half like a giant border fence is the craggy range of snowy Mount Ida, the highest climb in Greece. The only possible escape is the southern coast, but the only way to get there is up and over that eight-thousand-foot peak. The trek alone would be a challenge, but pulling it off with a belligerent prisoner in tow and a massive manhunt hot on your heels? Impossible.

"Ah!" There's a shout from somewhere inside the brambles, then a hand jerks up like it's hailing a cab. "Come toward me."

Chris White remains rooted in place, his arm high so I can find him and his eyes pinned on whatever he's spotted. I heave my backpack over my shoulders and begin fighting my way toward him, thorns tearing at my clothes. No one alive knows more about what happened to General Kreipe than Chris White, which is odd, because there's no reason Chris White should know anything about what happened to General Kreipe. Chris isn't a scholar or a military historian. He doesn't speak Greek or German, and as a lifelong pacifist he has no real taste for war stories. By day, Chris is a social worker who manages care for the elderly and the mentally disabled in the quiet English city of Oxford. But at night and on weekends, he's buried in a stack of topographical maps and out-of-print books in a little wooden shack behind his country cottage. In the great tradition of British amateur obsessives, Chris has spent the past ten years piecing together the mystery the Butcher faced on the morning of April 24, 1944: how do you make a German general disappear on an island swarming with German troops?

It was a magical idea. That's what Chris White loved about it. The scheme was so perfectly, defiantly un-Nazi: instead of force and brutality, the plan was to trip Hitler up with ingenuity and finesse. There would be no bullets, no blood, no civilians in the middle. Killing the general would have made him just another casualty of war, but not killing him would flip the tables and inflict a touch of fear in the men who were terrorizing Europe. The sheer mystery would make the Nazis crazy and plant an itch of doubt in every soldier's mind: if these phantoms could get the most protected man on a fortified island, then who was safe?

But getting him was only the beginning. The Butcher would throw everything he had into the manhunt, and what he had was a lot. He'd have troops swarming the woods, attack dogs searching for scent, recon planes buzzing the mountains and clicking photos of goat trails for ground scouts to later follow on foot. The Gestapo would offer bribes and rewards and activate its network of local traitors. The Butcher had more than one soldier for every four civilians, giving him a tighter security ratio than you'd find in a maximum-security prison. And that's what Crete had become: a prison fenced in by the sea. Crete had never been an ordinary island in the first place, at least not in Hitler's eyes. The Führer counted on Crete as a crucial transit point for German troops and supplies heading to the Russian front, and he intended to keep it safe as a bank vault. The slightest hint of any Cretan resistance, Hitler had ordered, should be crushed with eine gewisse brutalität — "a good bit of brutality."