Accessibility links
One of Us NPR coverage of One of Us: The Story of Anders Breivik and the Massacre in Norway by Asne Seierstad and Sarah Death. News, author interviews, critics' picks and more.

The Story of Anders Breivik and the Massacre in Norway

An account of the 2011 massacre in Norway delves into the killer's troubled childhood to trace his descent from a privileged and gifted youth to a terrorist, offering insights into his radical beliefs against a backdrop of the country's famously peaceful politics. Translated from the Norwegian by Sarah Death.

NPR stories about One of Us 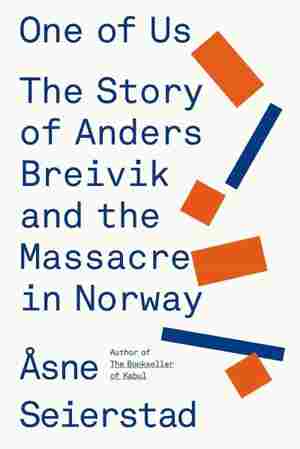 Excerpt: One Of Us: The Story of Anders Breivik and the Massacre in Norway

Up the hill, through the moss. Her wellingtons sank into the wet earth. The forest floor squelched beneath her feet.

She had seen it.

She had seen him fire and a boy fall.

More shots rang out. Rapid reports, a pause. Then another series.

She had reached Lovers' Path. All around her there were people running, trying to find places to hide.

Behind her, a rusty wire fence ran alongside the path. On the other side of the netting, steep cliffs dropped down into the Tyrifjord. The roots of a few lilies of the valley clung to the mountainside, looking as though they had grown out of solid rock. They had finished flowering, and the bases of their leaves were filled with rainwater that had trickled over the rocky edge.

From the air, the island was green. The tops of the tall pines spread into each other. The slender branches of thin, broadleaved trees stretched into the sky.

Down here, seen from the ground, the forest was sparse.

But in a few places, the grass was tall enough to cover you. Flat rocks hung over one part of the sloping path, like shields you could creep under.

There were more shots, louder.

She crept along Lovers' Path. Back and forth. Lots of kids were there.

'Let's lie down and pretend we're dead,' one boy said. 'Lie down in strange positions, so they think we're dead!'

She lay down, one cheek facing the ground. A boy lay down beside her and put his arm round her waist.

There were eleven of them.

They all did what the one boy said.

If he had said 'Run!' perhaps they would have run. But he said 'Lie down!' They lay close together, their heads turned towards the forest and the dark trunks of the trees, legs against the fence. Some of them huddled up against each other, a couple were lying in a heap. Two girls, best friends, were holding hands.

'It'll be fine,' one of the eleven said.

The heavy rain had eased off, but some last drops were still trickling down their necks and sweaty cheeks.

They took in as little air as possible, trying to breathe without a sound.

A raspberry bush had strayed out onto the cliff. Wild roses, pale pink, almost white, were clinging to the fence.

Then they heard footsteps approaching.

He advanced steadily through the heather. His boots stamped deeply into the ground as he walked over harebells, clover and trefoil. Some decaying branches snapped underfoot. His skin was pale and damp, and his thin hair was swept back. His eyes were light blue. Caffeine, ephedrine and aspirin ran in his bloodstream.

By this point he had killed twenty-two people on the island.

After the first shot, it had all been easy. The first shot had cost him. It had been almost impossible. But now, pistol in hand, he was relaxed.

He stopped on the little rise that provided cover for the eleven. From there, he looked calmly down at them and asked: 'Where the hell is he?'

His voice came loud and clear.

Nobody answered, nobody moved.

The boy's arm lay heavily on her. She was wearing a red waterproof jacket and wellingtons, he was in checked shorts and a T-shirt. She was tanned, he was pale.

The man on the rise started from the right.

The first shot entered the head of the boy lying at the end.

Then he aimed at the back of her head. Her wavy, chestnut brown hair was wet and shiny in the rain. The shot went right through her head and into her brain. He fired again.

The boy with his arm around her was hit. The bullet went through the back of his head.

A mobile phone rang in a pocket. Another bleeped as a text came in.

A girl whispered: 'No ... ' in a low, scarcely audible voice as she was shot in the head. Her drawn-out 'No-o-o' faded into silence.

The shots came every few seconds.

His weapons had laser sights. The pistol sent out a green trace, the rifle a red one. The bullets hit where the trace pointed.

A girl near the end of the row caught sight of his muddy black boots. At the back of his heels, down at path level, metal spurs protruded. On his trousers a chequered reflective strip lit up.

She was holding hands with her best friend. Their faces were turned to each other.

A bullet seared through the crown, the skull and the frontal lobe of her childhood friend's head. The girl's body jerked, the twitchings ran into her hand. Her grip slackened.

Seventeen years is not a long life, thought the one still alive.

Another shot rang out.

It whined past her ear and sliced her scalp. Blood ran over her face and covered the hands her head was resting on. One more shot.

The boy beside her whispered: 'I'm dying.'

His breathing grew quieter and quieter, until there was no more sound.

From somewhere in the middle of the group came a weak moaning. There were faint groans and a few gurgling sounds. Then only a little squeak or two. Before long there was silence.

There had been eleven pounding hearts on the path. Now only one was still beating.

A bit further along a log was wedged at an angle, covering a hole in the fence. Several people had crawled through the little opening and down a steep slope.

A boy was trying to help people down. When the shots rang out from the path, he took off to make the leap himself. He jumped down from Lovers' Path over wet sand, pebbles and shale.

A girl with long curly hair was sitting furthest out on a rocky ledge. She saw him as he jumped and called his name.

He paused as his foot made contact with the ground, stopped and looked round.

'Sit here with me!' she called.

There were young people all along the ledge. They squeezed together to make room. He sat down beside her.

They had met the night before. He came from up north, she was from the west.

He had lifted her up onto the stage during the concert. They'd taken a walk along Lovers' Path and a rest on the promontory. It had been a dark and cold night for July. She had borrowed his jersey. On the final climb back up to the tents he had asked her to give him a piggyback, he was so worn out. She had laughed. But she had carried him. Just so he would be near her.

The killer kicked the eleven bodies on the path to check they were dead. Shooting them had taken two minutes.

He was finished here and so he went on along Lovers' Path.

Inside his uniform he wore a medallion on a silver chain, a red cross on white enamel. The cross was encircled by silver decorations, a knight's helmet and a skull. Now, it knocked against the hollow of his neck as he strode steadily on, looking about him. The sparse trees were on one side, the steep drop beyond the fence on the other.

He paused by the log. He looked over it, down the steep drop.

A foot was protruding from a rock ledge. He saw something coloured in a bush.

The boy and girl on the ledge clutched each other's hands. When they heard the heavy footsteps come to a halt, the girl closed her eyes.

The man in the uniform raised his rifle and took aim at the foot. He pressed the trigger.

The boy gave a cry and his hand slipped out of hers. Sand and grit sprayed into the girl's face.

She opened her eyes.

He tumbled down. Did he fall, did he jump, she did not know. His body was thrown further as he was hit again; in the back. He floated in the air.

He landed at the water's edge, slumped over a rock. The bullet had passed through his jacket, through the jersey he had lent her the day before, through his lung and through his chest cavity before ripping open the artery in his neck.

The man on the path was jubilant.

'You will all die today, Marxists!'

He raised his weapon again.

From One Of Us: The Story of Anders Breivik and the Massacre in Norway by Asne Seierstad, translated by Sarah Death. Copyright 2015 by Asne Seierstad. Excerpted by permission of Farrar, Straus and Giroux.