Accessibility links
Beyond NPR coverage of Beyond: Our Future in Space by Chris Impey. News, author interviews, critics' picks and more.

Our Future in Space

Title
Beyond
Subtitle
Our Future in Space
Author
Chris Impey

An accessible report on humanity's imminent potential for living in space includes coverage of topics ranging from China's 2020 space station and the colonization of Mars to space-elevator innovations and the mapping of Earth-like exo-planets.

NPR stories about Beyond 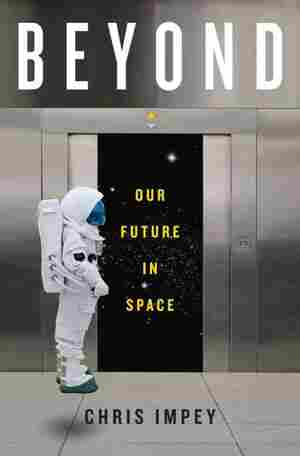 The Great 'Beyond': Contemplating Life, Sex And Elevators In Space

May 11, 2015 • Astronomer Chris Impey discusses the future of space travel, sex in space and the connection between science and Buddhism. Impey is the author of Beyond: Our Future in Space.

The Great 'Beyond': Contemplating Life, Sex And Elevators In Space

Excerpt: Beyond: Our Future In Space

The cost and difficulty of space travel is rooted in dependence on the way rockets work. Sunlight is used to generate electricity and power on Earth and in space. What if it could be used for propulsion as well?

It can. Johannes Kepler noticed that comet tails point away from the Sun, and in a 1610 letter to Galileo, he suggested: "Provide ships or sails adapt to the heavenly breeze, and there will be some who brave even that void." Jules Verne was the first to outline the concept of the solar sail in 1865, seizing on James Clerk Maxwell's theory that light has momentum as well as energy so it can exert pressure on objects. In From the Earth to the Moon, Verne wrote: "Light or electricity will probably be the mechanical agent [by which we shall] travel to the moon, the planets, and the stars. ... ​"

The physics is simple. When photons hit any reflective surface, their momentum changes as they reverse their velocity, imparting a very small unit of force to the object they hit. When the shiny surface of a sail faces the Sun, the sail is pushed away from the Sun. Solar sails can do anything nautical sails can do, including tacking. Changing the angle of the sail relative to the Sun affects the direction in which the sail is propelled. The sail can direct a spacecraft toward the Sun by using photon pressure to slow the spacecraft and lower its orbit. A solar sail can even act like an antigravity machine, using solar pressure to balance the Sun's gravity and hover anywhere in space.

Light pushes very gently on a solar sail in Earth orbit, so acceleration is feeble when compared with the kick imparted by a rocket. But a rocket will run out of fuel while the Sun keeps shining. This steady stream of photons creates acceleration that adds up to a substantial velocity boost. A solar sail should be big and light, to catch as much sunlight as possible and thus impart maximum possible velocity to the spacecraft. Cosmos 1 was intended to be a prototype for interplanetary travel using a solar sail. It was funded by the Planetary Society and Cosmos Studios, the film studio founded by Ann Druyan, Carl Sagan's widow. Sagan had died in 1996 and she wanted the 600-square-meter Mylar sail to be his Taj Mahal, a monument to a man who had argued for us to weigh anchor and set sail for the stars.

Sunlight would exert a tiny acceleration of half a millimeter per second per second on the huge sail. After one day, the speed would be just 100 mph, but after 100 days, its speed would be 10,000 mph. After 1,000 days, it would reach a blistering 100,000 mph. Unfortunately, the Volna rocket that was launched from a Russian submarine in June 2005 failed, and Cosmos 1 went to the bottom of the Barents Sea.

Solar-sail development has continued, but the ambitions and the size of the sails have been scaled back. A team from NASA built -NanoSail-D, based on the CubeSat specifications. CubeSat is a miniaturized satellite designed to spur space research by using standard components and off-the-shelf electronics. A CubeSat is a bit bigger than a Rubik's Cube — 10 centimeters on a side and weighing less than 1.3 kilograms. Most CubeSat launches have come from academia, but companies such as Boeing have built CubeSats, and amateur satellite builders have gotten their projects off the ground using crowdfunding campaigns on websites such as Kickstarter.

NASA's NanoSail-D was designed to use three CubeSats to deploy triangular sails totaling 10 square meters. Unfortunately, it too was scuppered by the launch vehicle when its Falcon rocket malfunctioned in 2008. But NASA persisted, and a twin was successfully launched in 2011 (Figure 43). NanoSail-D was never intended to be more than a test of solar-sail deployment, and it burned up after 240 days in low Earth orbit. The previous year, the Japan Aerospace Exploration Agency (JAXA) had sent IKAROS toward Venus. It was the first spacecraft to be fully powered by a solar sail. NASA had plans to launch a 1,200 square-meter sail called Sunjammer but cancelled the project in late 2014. The name comes from an Arthur C. Clarke short story.

CubeSats are at the epicenter of the business plans of commercial space companies. In the next five years, more than a thousand nanosats will be launched, some larger than a CubeSat and some smaller. In early 2014, a batch of twenty-eight CubeSats was released by a satellite "shooter" aboard the International Space Station to take pictures of the Earth. In 2013, the first PhoneSat went into orbit. This used sensing plug-ins for a Google smartphone to measure magnetic fields, pressure, and more. If the launch cost drops below $1,000 per kilo, anyone will be able to get into the game. Nanosats will be the first choice for remote sensing on moons and planets in the Solar System.

Like space elevators, solar sails are still in their infancy. The challenge is to launch a gossamer film that's reflective, the size of a football field, and a hundred times thinner than a sheet of paper. The sail has to be launched in a compact configuration and then unfurled in space and held rigid by a frame or inflatable boom. Solar sails are slow and steady in their acceleration, but they face diminishing returns as they reach the outer Solar System, because the amount of "push" from solar photons goes down by the square of the distance from the Sun. The sail doesn't slow down, but its speed does increase more and more slowly.

As a result, some people are exploring radical ideas. An electric solar sail doesn't look like a sail; rigid conducting wires extend radially from the spacecraft and a current keeps them charged up to 20,000 volts. Their electric field makes them look 50 meters thick to the solar-wind ions, and that interaction drives the spacecraft. Magnetic solar sails also use the solar wind, but they deflect the ions with a magnetic field made by running current through wire loops. Magnetic sails can use planets and the Sun for thrust, by pushing against their magnetic fields. To venture beyond our Solar System "harbor," we'll want to build up as much speed as possible before coasting across the vast interstellar sea.