The Tragedy of Richard Nixon

A Pulitzer Prize and National Book Award winner presents a shocking and riveting look at one of the most dramatic and disastrous presidencies in U.S. history.

NPR stories about One Man Against the World 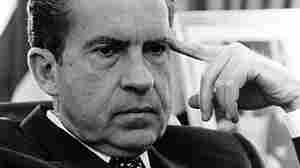 In his new book One Man Against the World, Tim Weiner explores some of the questions surrounding the presidency of Richard Nixon, pictured above in the Oval Office on Feb. 19, 1970. National Archives/Getty Images hide caption

June 15, 2015 • In his new book, New York Times journalist Tim Weiner paints a portrait of a president overwhelmed by wars at home and abroad, whose self-destructive behavior resulted in "political suicide."

Excerpt: 'One Man Against The World'

Balzac once wrote that politicians are "monsters of self- possession." Yet while we may show this veneer on the outside, inside the turmoil becomes almost unbearable.

Richard Nixon led the United States through a time of unbearable turmoil. He made war in pursuit of peace. He committed crimes in the

name of the law. He tore the country apart while trying to unite it. He sabotaged his presidency by violating the Constitution. He destroyed himself and damaged the nation through deliberate acts of folly.

He vowed to bring the tragedy of Vietnam to an honorable end; he brought death and disgrace instead. He practiced geopolitics without subtlety; he preferred subterfuge and brutality. He dropped bombs and napalm without remorse; he believed they delivered a political mes- sage beyond blood and ﬁre. He charted the course of the war without a strategy; he delivered victory to his adversaries.

His gravest decisions undermined his allies abroad. His grandest delusions armed his enemies at home. "I gave them a sword," he said after his downfall, "and they stuck it in."

That sword was a weapon he forged and sharpened himself. His con- duct in ofﬁce bent the Constitution to its breaking point. The truth was not in him; secrecy and deception were his touchstones.

Yet he had an undeniable greatness, an unsurpassed gift for the art of politics, an unquestionable desire to change the world. He wielded power like a Shakespearean king.

In his eyes, he stood above the law, and that was his fatal ﬂaw, for he fell like a king fated to die in the ﬁnal act of a tragedy. His arrogation of power created the criminal conduct that his White House counsel warned him was "a cancer within, close to the presidency, that's grow- ing. It's growing daily."

This book is a history of Richard Nixon's anguished presidency. It concentrates on the intertwined issues of war and national security, because Nixon spent so many of his hours and so much of his power wrestling with those twin demons.

Nixon was the ﬁrst president I remember vividly. I saw the anger in his eyes and I heard the anguish in his voice as he spoke to the nation about the war in Vietnam. His dark scowl, radiating from our black-and- white television, was an image as indelible as the bloody battles broad- cast on the nightly news. I witnessed hundreds of thousands of citizens marching against the war in Washington, while I read that hundreds of American soldiers were dying every week. I talked with my parents about what I would do if drafted into battle. I gasped when National Guards- men killed four kids at Kent State in Ohio during a protest against Nix- on's invasion of Cambodia. It dawned on me that dissent could be dangerous, even in a democratic country.

Nixon's grasp on power began to slip soon after he won reelection in 1972 by a margin of almost eighteen million votes, the largest in American history. He was undone by the slow but steady revelation of "the White House horrors," in the immortal words of John N. Mitchell, Nixon's former attorney general and campaign manager, one among many once-honorable men who went to prison to protect the president. The Watergate break-in was only one of those horrors, and hardly the worst.

I was riveted by the televised congressional hearings that forced his closest aides to lie about the dirty tricks he had deployed to secure his overwhelming victory. I was transﬁxed by the intensity of the struggle as the White House battled Congress and the Supreme Court over the president's prerogatives. At ﬁrst Nixon seemed to ﬁght under the rule of law rather than the laws of war. Then he ﬁred the attorney general and the special prosecutor in charge of the Watergate investigation; he would risk impeachment and ponder imprisonment rather than release his secret White House tapes. His days were numbered after that blunder. I recall the last throes of his doomed presidency, the pathos of his fare- well to the nation.

Nixon has fascinated me ever since. I wrote about his command and control of the Central Intelligence Agency and the Federal Bureau of Investigation in two books, Legacy of Ashes and Enemies. As a reporter for the New York Times, I interviewed some of his right-hand men, among them Henry Kissinger, his national security adviser and secretary of state. I have discussed Nixon's legacy with the presidents who succeeded him, Gerald Ford and Jimmy Carter. I covered the continuing debate over the disgraced president's reputation and his rightful place in his- tory. So I thought I knew something of the man when I began this work.

Then I dug into a treasure trove of top-secret records from the Nixon years, recently released from the vaults of the government of the United States. This book is based in great part on documents declassiﬁed between 2007 and 2014. I read them with a growing excitement. I felt like an archaeologist unearthing the palace of a lost empire.

Tens of thousands of ﬁles from his White House, his National Secu- rity Council, the CIA, the FBI, the State Department, the Pentagon, and the Joint Chiefs of Staff were newly unsealed. So were minutes of the secret White House committees that controlled military and intelligence operations under Nixon. The transcripts of federal grand jury testimony by Nixon himself, the only president ever compelled to answer ques- tions under oath in a criminal case, were now public records. Hundreds of hours of his infamous tapes ﬁnally came out in 2013 and 2014, along with previously classiﬁed entries in the daily diary of Nixon's closest aide, H. R. Haldeman. Together, they ensure that every quotation and each citation herein is on the record: no blind quotes, no unnamed sources, and no hearsay statements.

We have laws governing the declassiﬁcation of documents and free- dom of information, and they endure despite all that has been done in the name of government secrecy in the United States. Without them, the acts that President Nixon hoped to conceal forever would remain state secrets.

What compelled him to commit crimes—secretly collecting cam- paign cash from foreign dictators and aspiring American ambassadors, wiretapping his loyal aides and distinguished diplomats as if they were foreign spies—and then conspire to conceal them? Why did he drive the nation deeper into Vietnam, at a cost of tens of thousands of Amer- ican lives, only to accept a settlement no better than the one he could have signed on his ﬁrst day in ofﬁce? Why did he lie about his war plans to his secretary of defense and his secretary of state? What were the Watergate burglars seeking? Why did Nixon tape-record the evi- dence that proved his complicity in the cover-up? Why did he under- take the unconstitutional actions that led to his resignation?

Now we have answers, straight from the president and his closest aides. The story is richer and stranger than we ever knew.

"Always remember," Nixon said on the day he resigned, "others may hate you. But those who hate you don't win unless you hate them. And then you destroy yourself." This story is the tragedy of a man destroy- ing himself.