The well-respected doctor, researcher, professor and author of Shocked delves into the medical benefits of marijuana by visiting dispensaries in California and Colorado, learning how vaporizers work, sampling pure hash and walking through Nepal coated in marijuana paste. 20,000 first printing. 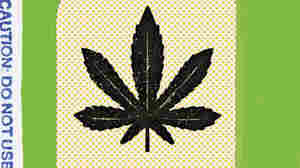 July 14, 2015 • Dr. David Casarett used to think of medical marijuana as "a joke." But after taking a deeper look, he's changed his mind. Casarett's new book is Stoned: A Doctor's Case for Medical Marijuana.

Randi was a healthy baby, and the pediatrician in attendance when she was born pronounced her to be "perfect." Indeed, her parents, Cal and Cindy, had no reason to be worried.

I'm hearing this from Cal and Cindy while we sit in the living room of their small, neat home near San Diego. As we talk, all three of us are watching Randi, now about two and a half years old. She's a solemn child, with long hair of a golden blond color that matches her parents' exactly.

Randi is sitting on a plush rug next to a sliding glass door that leads to the backyard. She's surrounded by stuffed animals, but her attention is fixed on Buster, a very real calico cat. Randi is babbling happily in what sounds to me like nonsense sentences. The only word I catch is — improbably-- "daddy."

Buster seems bemused by this unexpected promotion to fatherhood. He's watching Randi with a friendly expression, head cocked to one side. As the adults look on, Randi babbles and Buster listens intently.

"Yeah," Cal says in a voice tinged with wonder. "They have this thing. She loves telling Buster about how her day is going."

I met Cal a few days ago at a medical marijuana dispensary, and he told me that he wasn't there for himself. He was reluctant to talk then, but eventually he told me he'd be willing to tell me about the reason he was in that dispensary. That reason, it turns out, was his daughter Randi.

She was a normal baby for the first six months or so, Cindy says. Then one night, out of the blue, she had a seizure that lasted about a minute. It scared her parents, but didn't seem to leave Randi any worse off, and so Randi's pediatrician wrote it off as a one-time thing. (It's not unusual for a child to have a single seizure, sometimes in response to a fever.) Randi had another seizure about a month later, and then another. That wasn't normal.

If you've ever seen a seizure, you know that a minute can seem like an hour, and that's especially true if you're watching your own child. Randi's body would become rigid, as all of her muscles seemed to tense at the same time. She looked like there were spasms coursing through every muscle in her body, and it was difficult for Cal and Cindy to tell whether she was still breathing.

Randi's doctors made the diagnosis of Dravet syndrome, a rare disorder in which infants develop intractable seizures. Those seizures, and the havoc they wreak on the brain, impair neural development and learning. It's an often-fatal disease that Cal tells me is as serious as cancer, but much harder to treat.

Dravet syndrome is caused by a mutation in the SCN1A gene, which is responsible for the channels in a cell membrane that let sodium flow back and forth. Sodium in our bodies exists as a positively charged ion, and the concentration of sodium in a cell determines whether that cell is positively or negatively charged. Just as telephone landlines relay positive and negative charges to carry information, neurons use charges across their surface to conduct impulses. But if they lose control of those ions, the result is a little like what happens when lightning strikes a telephone pole, disrupting signals and frying circuits.

When Randi turned two, Cal says, "it was as if someone turned a dial in her head, cranking up whatever was going on in there." Soon Randi was having a seizure almost every day, and those seizures went on for ten or fifteen minutes.

They went to specialists, who tried seemingly endless combinations of seizure medications. Some seemed to help, Cindy says, but it was hard to be sure. And any improvements were just a temporary reprieve.

Soon they'd exhausted the list of available anti-seizure medications. "We'd tried a dozen other medicines," Cal told me. "Easily a dozen. And all of them had side effects and warnings."

So about three months ago, Cal and Cindy started giving Randi a marijuana-based oil that he got at the dispensary where I met him. Cal and Cindy tell me that their decision to try the oil really wasn't much of a choice. They were desperate.

They may have been desperate, but that doesn't mean they were deluded. In fact, researchers have explored the use of cannabinoids for intractable seizures for more than 40 years. It was Raphael Mechoulam — widely regarded as the grandfather of medical marijuana, and its most respected scientist — who did some of the earliest studies back in the 70s.

Now Orrin Devinsky is trying to find out, in a rigorous way, whether the marijuana oil that Randi is taking could be used to treat the seizures of Dravet syndrome. He's the director of New York University Langone Medical Center's Comprehensive Epilepsy Center, and he's testing the effect of CBD (cannabidiol) on seizures in a randomized controlled trial.

Devinsky is using CBD instead of THC (tetrahydrocannabinol) because he thinks that as many as 80 percent of kids might respond to CBD, compared to perhaps 60 percent of kids getting THC. And, as Cal and Cindy knew, CBD doesn't have the psychoactive effects that THC does, and it won't make you high. So it's probably also much safer in young children.

Just as Devinsky did, Cal and Cindy decided that they wanted oil that had high concentrations of CBD, and as little THC as possible.

"It's pure CBD," Cindy tells me. "No THC at all." She knows this because they had the oil tested by a laboratory, which found that it was 57 percent CBD and less than 1 percent THC.

They started slowly, using a very low dose at first. Just a few drops mixed with applesauce. Then, gradually, they increased the dose to about 100 milligrams, given twice a day. That's when Randi's seizures started to wane.

"It's a miracle drug," Cindy says.

"It wasn't magic," Cal cautions. "It wasn't like someone flipped a switch. But she just ... missed a couple of days. We hardly noticed at first."

Then the seizures began to wane as they increased the dose further. Soon she was having a seizure only once a week. That was still difficult and disruptive, but a vast improvement over the multiple seizures every day that she used to suffer.

And did they notice any changes in Randi's personality? Or her behavior?

I'm wondering whether she was more sleepy, or maybe confused. But Cal and Cindy say that Randi started showing an interest in the world around her in a way that she hadn't since her seizures started. She also began telling Buster the cat about her day.