Investigations into the Strange New Science of the Self

In a tour of the latest neuroscience of schizophrenia, autism, out-of-body experiences and other disorders, a science journalist presents a collection of in-depth interviews that explore the lives of individuals who offer different perspectives on the sense of self.

NPR stories about The Man Who Wasn't There 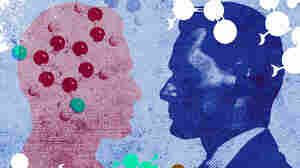 July 28, 2015 • In his new book, The Man Who Wasn't There, Anil Ananthaswamy examines the ways people think of themselves — and how those perceptions can be distorted by certain brain conditions.

Excerpt: The Man Who Wasn't There

Adam Zeman will never forget the phone call. It was a psychiatrist, asking him to come urgently to the psych ward. There was a patient claiming to be brain dead.

The patient, Graham, was a forty-eight year-old man. Following a separation from his second wife, Graham had become deeply depressed and had tried to kill himself. He got into this bath and pulled an electric heater into the bathwater, wanting to electrocute himself. Fortunately, the fuse blew and Graham was spared. "It didn't seem to do any physical damage to him, but some weeks later he formed the belief that his brain had died," said Zeman, a neurologist at the University of Exeter in the UK.

It was a rather specific belief. And one that led Zeman to have some very strange conversations. "Look, Graham, you are able to hear me, see me, and understand what I'm saying, remember your past, and express yourself, surely your brain must be working," Zeman would say to Graham.

Graham would say, "No, no, my brain's dead. My mind is alive but my brain is dead."

Worse yet, Graham was distraught at his unsuccessful attempt at suicide. "He was one of the undead or half-dead," Zeman told me. "He in fact went and spent quite a bit of his time, for a while, in graveyards, because he felt he was with his own when he was there."

Zeman quizzed Graham to understand the grounds for this belief. It became clear that something very fundamental had shifted. Gra­ham's subjective experience of himself and his world had changed. He no longer felt he needed to eat or drink. Things that once used to give him pleasure no longer did. "When he pulled on a cigarette, nothing happened," Zeman told me. Graham claimed that he never needed to sleep, that he did not feel sleepy. Of course, he was doing all of these things — eating, drinking, sleeping, but his desire for these and the intensity of his feelings had damped down dramatically.

Graham had lost something we all have: a keen sense of our own appetites and emotions...

Graham's delusion was immune to evidence to the contrary. Zeman, in his conversations, would bring Graham to the point of sur­render — or make him see the falseness of his delusion. Graham would acknowledge that a whole range of his mental faculties were intact, that he could see, hear, speak, think, remember and so on.

So, Zeman would say to him, "Clearly, Graham, your mind is alive."

"The mind has a lot to do with the brain; surely your brain is alive," Zeman would prod him.

But Graham would not take the bait. "He'd say, 'No, my mind is alive, but my brain is dead. It died in that bath," Zeman told me. "You could get quite close to producing what you would think was knock- down evidence, but he wouldn't accept it."

Zeman recognized the symptoms in Graham, and diagnosed him as suffering from Cotard's syndrome, which was first identified as a distinct disorder by the nineteenth-century French neurologist and psychiatrist, Jules Cotard.

It is there when we wake up and slips away when we fall asleep, maybe to reap­pear in our dreams. It is that feeling we have of being anchored in a body we own and control, and from within which we perceive the world. It is the feeling of personal identity that stretches across time, from our first memories to some imagined future. It is all of these tied into a coherent whole. It is our sense of self. Yet, despite this personal intimacy we have with ourselves, elucidating the nature of the self remains our greatest challenge.

All through recorded history, it is clear that humans have been fascinated and confounded by the self. Pausanias, a Greek traveler during Roman rule, wrote about the maxims inscribed at the fore-temple at Delphi by seven wise sages. One maxim said, "Know thyself." The Kena Upanishad, among the most analytical and metaphysical of Hindu scriptures, begins with these words: "By whom commanded and directed does the mind go towards its objects? ... At whose will do men utter speech? What power directs the eye and the ear?"

And so it is that from the Buddha to the modern neuroscientist and philosopher, humans have pondered the nature of the self. Is it real or an illusion? Is the self in the brain, and if so where in the brain is it? Neuroscience is telling us that our sense of self is an outcome of complex interactions between brain and body, of neural processes that update the self moment by moment, the moments strung together to give us a seamless feeling of personhood. We often hear of how the self is an illusion, that it is nature's most sophisticated sleight-of- hand. But all this talk of tricks and illusions obfuscates a basic truth: Remove the self and there is no "I" on whom a trick is being played, no one who is the subject of an illusion.