Why the World Needs a Powerful America

by Dick Cheney and Liz Cheney

The former vice president and his daughter evaluate America's essential role as an international power, make arguments for the maintenance of a proactive military force and identify potential defense vulnerabilities in the current administration's military stance. 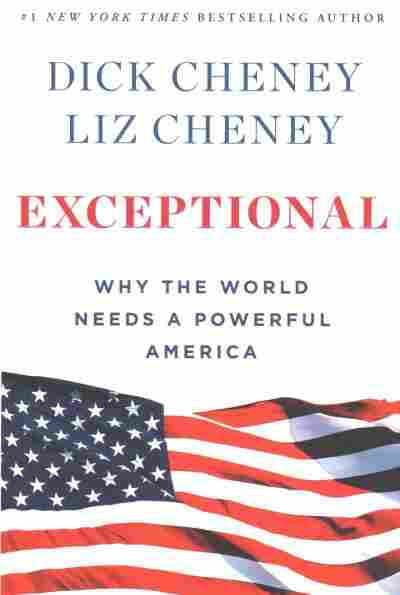 Yes, We Are Exceptional

And now let us indulge an honest exultation in the conviction of the benefit which the example of our country has produced and is likely to produce on human freedom and human happiness. And let us endeavor to comprehend in all its magnitude and to feel in all its importance the part assigned to us in the great drama of human affairs.

Less than fifty years after our founding, the benefit of America's example for the world was evident. Yet Daniel Webster could not have begun to imagine the true magnitude of the role we would play "in the great drama of human affairs." We have guaranteed freedom, security, and peace for a larger share of humanity than has any other nation in all of history. There is no other like us. There never has been. We are, as a matter of empirical fact and undeniable history, the greatest force for good the world has ever known.

Born of the revolutionary ideal that we are "endowed by our Creator with certain inalienable rights," we were, first, an example of freedom's possibilities. During World War II, we became freedom's defender; at the end of the Cold War, the world's sole superpower.We did not seek the position. It is ours because of our ideals and our power, and the power of our ideals. In the words of British historian Andrew Roberts, "In the debate over whether America was born great, achieved greatness, or had greatness thrust upon her, the only possible conclusion must be: all three."

We are, as constitutional scholar Walter Berns put it, "the one essential country." It isn't just our involvement in world events that has been essential for the triumph of freedom. It is our leadership. No other nation, international body, or community of nations can do what we do. For the better part of a century, security and freedom for millions of people around the globe have depended on America's military, economic, political, and diplomatic might. For the most part, until the administration of Barack Obama, we delivered.

Since Franklin Roosevelt proclaimed us the "Arsenal of Democracy" in 1940, Republican and Democratic presidents alike have understood the indispensable nature of American power. Presidents from Truman to Nixon, from Kennedy to Reagan have known that America's strength must be safeguarded, her supremacy maintained. In the 1940s, American power and leadership were essential to victory in World War II and the liberation of millions from the grip of fascism. In the Cold War, American strength and supremacy were key in liberating Eastern Europe, defeating Soviet totalitarianism, and ensuring the survival of freedom. In this century, our leadership and our might will once again be required for the defeat of militant Islam and the preservation of our security and liberty in the face of threats from other dedicated adversaries. Yet despite the explosive spread of terrorist ideology and organizations, the establishment of an ISIS caliphate in the heart of the Middle East, the proliferation of nuclear weapons, and increasing threats from Iran, China, North Korea, and Russia, President Obama has departed from the bipartisan tradition going back seventy-five years of maintaining America's global supremacy and leadership.

He has abandoned Iraq, leaving a vacuum being filled by our enemies. He says he will do the same in Afghanistan. He has made dangerous cuts to America's conventional forces and reduced our nuclear arsenal in the misguided belief this will convince rogue nations to do the same. He has recalibrated America's foreign policy to avoid causing offense in Tehran. He has been so desperate to conclude a nuclear agreement Iran's leaders have no intention of honoring, that he has repeatedly misled the American people and granted dangerous concession after dangerous concession. He is gambling America's security on the veracity of the mullahs in Tehran. He is unconcerned with maintaining American supremacy because it is inconsistent with his worldview. "No world order," he tells us, "that elevates one nation or group of people over another will succeed."

President Obama has diminished American power and retreated from the field of battle, fueling rising threats against our nation. He has pursued a foreign policy built on appeasing our adversaries, abandoning our allies, and apologizing for America. "A civilization that feels guilty for everything it is and does," wrote Jean-François Revel, "will lack the energy and convictionto defend itself." For President Obama, it goes beyond lacking the "energy and conviction" to defend us. He has dedicated his presidency to restraining us, limiting our power, and diminishing us.

The touchstone of his ideology—that America is to blame and her power must be restrained—requires a willful blindness about what America has done in the world. It is fundamentally counterfactual. When President Obama's ideology has come crashing up against reality, America's security has suffered.

There is good news. Just as one president has left a path of destruction in his wake, one president can rescue us. The right person in the Oval Office can restore America's strength and our alliances, renew our power and leadership, defeat our enemies, and keep us safe. It will not be easy. There are difficult decisions to be made and very little time.

We have faced grave challenges before, and the right leaders have brought us through. As Charles Krauthammer has observed:

It is one of the enduring mysteries of American history, so near providential as to give the most hardened atheist pause—that it should have produced, at every hinge point, great men who matched the moment. A roiling, revolutionary British colony gives birth to the greatest cohort of political thinkers ever: Jefferson, Adams, Madison, Hamilton, Washington, Franklin and Jay. The crisis of the 19th century brings forth Lincoln;the 20th, FDR.

We are living at another hinge point of history and require a president equal to this moment. We must choose wisely.

As citizens, we also have a duty to protect our ideals and our freedoms by safeguarding our history. We must ensure that our childrenknow the truth about who we are, what we've done, and why it is uniquely America's duty to be freedom's defender.

Our children should know about the boys of Pointe du Hoc and Doolittle's Raiders, the Battles of Midway and Iwo Jima. They should learn about the courage of the young Americans who fought the Nazis at the Battle of the Bulge and the Japanese on Okinawa. They should learn why America was right to end the war by dropping the atomic bombs on Hiroshima and Nagasaki, and about the fundamental decency of a nation that established the Truman Doctrine, the Marshall Plan, the Berlin Airlift, and the North Atlantic Treaty Organization. They need to know about the horror of the Holocaust, and what it means to promise "never again."

They should know that once there was an empire so evil and bereft of truth it had to build a wall to keep its citizens in, and that the free world, led by America, defeated it. They need to know about the terrorists who attacked us on 9/11, the courage of the first responders, and the heroism of the passengers on Flight 93. They should understand what kind of world militant Islam will create if we don't defeat it.

They should learn about great men like George C. Marshall and Dwight Eisenhower and Harry Truman and Ronald Reagan. We must teach them what it took to prevail over evil in the twentieth century and what it will take in the twenty-first. We must make sure they understand that it is the brave men and women of the United States armed forces who defend our freedom and secure it for millions of others as well.

Our children need to know that they are citizens of the most powerful, good, and honorable nation in the history of mankind, the exceptional nation. Ordinary Americans have done heroic things to guarantee her survival. America's future, and the future of freedomfor all the world, now depends on us. Speaking at Omaha Beach on the fortieth anniversary of the D-Day landings, President Reagan put it this way: "We will always remember. We will always be proud. We will always be prepared, so we mayalways be free."