Every story has two sides. Every relationship has two perspectives. And sometimes, it turns out, the key to a great marriage is not its truths but its secrets. At the core of this rich, expansive, layered novel, Lauren Groff presents the story of one such marriage over the course of 24 years.

NPR stories about Fates and Furies 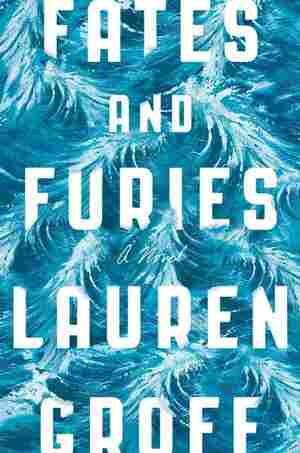 October 27, 2015 • Drawing from experiences living in the South and wanting to counter older portrayals, the author of Morning Edition's latest book club pick sought to craft "a strong woman who doesn't self-destruct."

September 15, 2015 • In her newest novel, Lauren Groff uses a split narrative to tell the story of a long marriage. Critic Jason Sheehan says the device works thanks to Groff's stunning language. 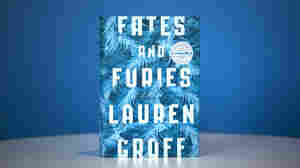 September 15, 2015 • Author and screenwriter Richard Russo has selected our third book — a new novel by Lauren Groff. Fates and Furies chronicles a marriage over 24 years. Russo calls it "an incredibly ambitious work."

A swift drizzle from the sky, like a curtain's sudden sweep. The seabirds stopped their tuning, the ocean went mute. Houselights over the water dimmed to gray.

Two people were coming up the beach. She was fair and sharp in a green bikini, though it was May in Maine and cold. He was tall, vivid; a light flickered in him that caught the eye and held it. Their names were Lotto and Mathilde.

For a minute they watched a tidepool full of spiny creatures that sent up curls of sand in vanishing. Then he took her face in his hands, kissed her pale lips. He could die right now of happiness. In a vision, he saw the sea rising up to suck them in, tonguing off their flesh and rolling their bones over its coral molars in the deeps. If she were beside him, he thought, he would float out singing.

Well, he was young, twenty-two, and they had been married that morning in secret. Extravagance, under the circumstances, could be forgiven.

Her fingers down the backs of his trunks seared his skin. She pushed him backwards, walking him up a dune covered in beach pea stalks, down again to where the wall of sand blocked the wind, where they felt warmer. Under the bikini top, her gooseflesh had taken on a lunar blue, and her nipples in the cold turned inward. On their knees, now, though the sand was rough and hurt. It didn't matter, they were reduced to mouths and hands. He swept her legs to his hips, pressed her down, blanketed her with his heat until she stopped shivering, made a dune of his back. Her raw knees were raised to the sky.

He longed for something wordless and potent: what? To wear her. He imagined living in her warmth forever. People in his life had fallen away from him one by one like dominoes; every movement pinned her further so that she could not abandon him. He imagined a lifetime of screwing on the beach until they were one of those ancient pairs speedwalking in the morning, skin like lacquered walnut meat. Even old he would waltz her into the dunes and have his way with her sexy frail bird-bones, the plastic hips, the bionic knee. Drone lifeguards looming up in the sky, flashing their lights, booming Fornicators! Fornicators! to roust them guiltily out. This, for eternity. He closed his eyes and wished. Her eyelashes on his cheek, her thighs on his waist, the first consummation of this terrifying thing they'd done. Marriage meant forever.

[He'd planned for a proper bed, a sense of ceremony: he'd stolen his roommate Samuel's beach house, having spent most summers there since he was fifteen, knowing that they hid the key under the hawksbill turtle carapace in the garden. A house of tartan and Liberty print and Fiestaware, thick with dust; the guest room with the lighthouse's triple blink in the night, the craggy beach below. This was what Lotto had imagined for the first time with this gorgeous girl he'd magicked into wife. But Mathilde was right to agitate for plein-air consummation. She was always right. He would know this soon enough.]

It was over too quickly. When she shouted, the gulls hidden by the dune buckshot the low clouds. Later, she'd show him the abrasion against her eighth vertebra from a mussel shell when he dug her in and dug her in. They were pressed so close that when they laughed, his laugh rose from her belly, hers from his throat. He kissed her cheekbones, her clavicle, the pale of her wrist with its rootlike blue veins. His terrible hunger he'd thought would be sated was not, couldn't be. The end apparent in the beginning.

"My wife," he said. "Mine." Perhaps instead of wearing her, he could swallow her whole.

"Oh?" she said. "Right. Because I'm chattel. Because my royal family traded me for three mules and a bucket of butter."

"Stop," she said. She'd lost her smile, so shy and constant that he was startled to see her up close without it. "Nobody belongs to anybody. We've done something bigger. It's new."

He looked at her thoughtfully, gently bit the tip of her nose. He had loved her with all his great capacity these two weeks, and in so loving had considered her transparent, a plate of glass. He could see all the way through to the goodness at her quick. But glass is fragile; he would have to be careful. "You're right," he said; thinking, No, thinking how deeply they belonged. How surely.

Between his skin and hers, there was the smallest of spaces, barely enough for air, for this slick of sweat now chilling. Even still, a third person, their marriage, had slid in.