Accessibility links
The Beast Side NPR coverage of The Beast Side: Living And Dying While Black in America by D. Watkins. News, author interviews, critics' picks and more.

Living And Dying While Black in America

by D. Watkins and David Talbot

Title
The Beast Side
Subtitle
Living And Dying While Black in America
Author
D. Watkins and David Talbot

NPR stories about The Beast Side 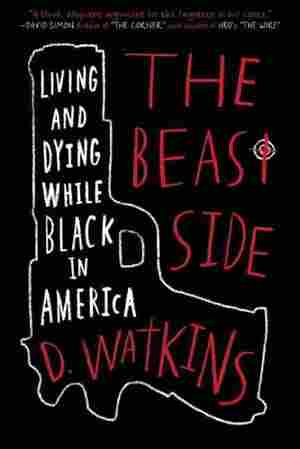 May 13, 2016 • Author D. Watkins says that crack destroyed his East Baltimore neighborhood, and he explains how the real day-to-day of selling drugs is nothing like the movies. Originally broadcast Oct. 1, 2015. 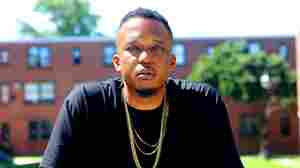 D. Watkins' work has appeared in The Baltimore Sun and Salon. He will start teaching English at Goucher College in the spring. Aaron Maybin/Hot Books hide caption

October 1, 2015 • Author D. Watkins says that crack destroyed his East Baltimore neighborhood, and he explains how the real day-to-day of selling drugs is nothing like the movies. His new book is The Beast Side.

Excerpt: The Beast Side: Living (And Dying) While Black In America

The other night, I got one of those 3 a.m. phone calls I hate. My homie Tip was on the other end, like, "Wake the fuck up! Yo, you ain't gonna believe this shit!"

"Who got hit now?" I headed to the fridge, in search of a little wine or vodka or something to numb the blow I knew was coming. I know how this works.

"Free! Free?" I was just with Free the other week. We leaned on the fence at Bocek Park, watching wiry teens battle it out in a game of 50 on the court, laughing at how our hoop dreams faded.

"What happened, yo?" I replied, pouring the last of the Svedka into my cup.

Tip said some kids were arguing, one slid off, came back, and sprayed the whole corner. When everyone came out of hiding, Free was lying on the ground face-first in a pool of blood with a big hole in his head. The argument had nothing to do with him; he was just in the wrong place at the wrong time.

I chugged my drink. It wasn't enough to give me a buzz and definitely not enough to cover the hole that Free's death had left.

Death hurts. East Baltimore guys like us hide behind our male bravado and pretend to be desensitized by murder, but it's not really true. The thought of Free being gone left a pain in my chest that spread as I moved from room to room. Three gulps into another bottle of Svedka, and I still felt the same.

Free wasn't supposed to be murdered. He was a forty-something-year-old dude who worked for the city. Free had two daughters he loved dearly. He wasn't a gangsta, just a regular guy who loved ladies and greasy chicken cheese steaks with extra provo­lone from Mama Mia's. I don't even remember Free breaking the law. He was that older dude who hung around my friends and me when we sold smack on Durham Street back in the day. He'd crack jokes with us and hit on every woman who walked by, like, "No disrespect, but you lookin' good today, Boo Boo!"

A day or so after his death, I went and chilled on the same steps where he was hit. The blood had dried, and people had left teddy bears. Balloons that read I LOVE YOU and RIP FREE were taped to a street lamp. Slumped faces decorated the murder scene with red cups and lit Newports. Some T-shirts with Free's face began to pop up. Every conversation on the corner that day began with "Remem­ber when Free ..."

A few weeks ago, I had a photo shoot with The Baltimore Sun. A local reporter named Julie Scharper was doing a story on my jour­ney from reckless delinquent to published writer. I decided to have the photo for the article taken in front of Bocek Park, not too far from where Free was murdered.

The camera guy drove by slowly and squinted as I waved, giving him the signal that I was the guy waiting for him. He paralleled his hybrid, exited, and dragged his equipment my way.

"My apologies, sir. Who are you again, and why am I taking your picture for the Sun?"

I told him about my rough upbringing and the events that led up to me leaving a life of crime. His eyes welled but didn't spill. He was proud, and said stories like mine gave him hope.

Some days before my shoot, he had to document a candlelight vigil for a fourteen-year-old kid named Najee Thomas, who took a shot in the head in the Cherry Hill area of south Baltimore. While there, he saw a small boy ask his mom, "Why did they kill Najee? He was a good guy!" His mom nodded and said, "That's just how it is."

The Sun photographer looked me in the eyes. "Does it really have to be like that?" he asked. I couldn't answer his question. I never consider myself to be a shooter, but gunplay is all I know.

At eleven, my cousin Don Don was murdered over a girl he didn't really date, named Tracy. It was a Sunday, and we had all been watching Martin before spilling onto the corner and imitat­ing Otis, Sheneneh, and the rest of the characters from the show. Tracy's insanely jealous ex and an accomplice rained on our joy with blue flames. We scattered like roaches under a flicked light. When the smoke cleared, a teenage girl was hit in the back, and Don Don was left staring lifeless beyond the clouds. His eyes were hollow, his shirt drenched with blood, which eventually smeared on us as we formed a preteen circle around his body, begging him to wake up. Cops pulled us away as ambulance workers covered him with a white sheet, his neon Nikes poking out.

Don Don wasn't the first or the last. When I was fourteen, I wrote a twenty-page paper for my history class titled, "My Baltimore: The 15 times I Was Almost Murdered." The paper gave a detailed account of the murders I saw and the shots I ducked. My history teacher, Mr. Brown, said, "I never thought I could give an A to a paper with so many grammatical errors, but the eastside is real!"

That same year, my friends and I attended lusty preteen house parties every week. Baltimore club music ripped out of blown speakers while we grinded up against the prettiest-roundest-fastest-girls from our neighborhood. New sneakers got stepped on all night, but we didn't care. We just wanted to be noticed by the girls we dreamed about all day. But egos led to more than one party being shot up. A group of dudes who called themselves "The Regulators" were the first to pop pistols at our house party, followed by weekly shootouts between multiple crews. We didn't stop going. We brought our guns out, too.

Pistols became part of our uniforms. We toted them religiously to our basketball games, the shopping mall, and everywhere else we went.

It's easier to get a gun than a job in east Baltimore.