Title
Anything for You
Author
Kristan Higgins

When Connor O'Rourke proposes to his long-time on-again, off-again secret girlfriend, Jessica Dunn, and she says no, he gives her an ultimatum — marry him or their relationship is over.

NPR stories about Anything for You 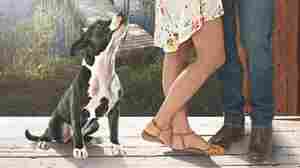 January 17, 2016 • This weekend, we're rewinding the NPR Books Time Machine to look at Kristan Higgins' beloved Blue Heron romance series, which wrapped up last month with book five, Anything For You.

Excerpt: Anything For You 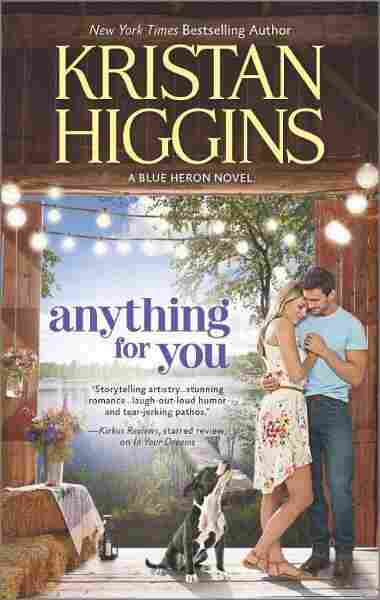 Though the words were said with a smile, they definitely weren't what Connor O'Rourke was hoping to hear. He was, after all, on a bent knee, holding up a diamond ring.

"And it was adorable." She ruffled his hair. That didn't bode well, either. "The answer is no, obviously. What were you thinking? And boy, I'm starving. Did you call for pizza yet?"

Okay. Granted, Jessica Dunn wasdifferent. They'd been dating for the past eight monthsor ten years, depending on how you counted itand getting her to this moment had taken as much strategizing as, oh, D-Day. Still, he hadn't quite anticipated this.

He tried again. "Jessica. Make me the happiest man on earth and say you'll be my wife."

"I heard you the first time, big guy. And I did wonder about all these candles. Nice touch, if a little on the fire-hazard side of things."

"And your answer is?"

"You already know my answer, and you knew it long before you asked anything. Now come on, Connor. Upsy-daisy."

He didn't move. Jess sighed and folded her arms across her chest, giving him a patient look, eyebrow slightly raised.

Her phone buzzed, and she pulled it out of her pocket, because she always checked her phone, no matter what they were doing. "Iron Man is killing all the bad guys in the cave," she said, deadpan.

This was normalher brother dictating text updates on whatever movie he and Gerard, his occasional babysitter, were watching. It could be funny. At the moment, not so much.

"Can we be serious here?" he asked.

"No. So up you go. Let's have a nice night, okay? Weren't we gonna watch Game of Thrones?"

Hail Mary, full of grace, she was really turning him down.

He didn't get up. With the hand that was not holding the little black velvet box, he rubbed his hand across his jaw. He'd shaved for this and everything. The diamond winked in the candlelight, taunting him.

"Look, Jess," he said. "I'm tired of feeling like you pay me by the hour. I'm tired of you breaking up with me. Why don't we get married and stay together for the rest of our lives?"

"You ever hear that expression, if it ain't broke, don't fix it?"

"Do you see me here on one knee with an expensive ring in my hand?"

"Yes. You're hard to miss. And it's very pretty. But I get the feeling you think youshould love me for the simple reason that we've been sleeping together on and off for so many years"

"And secondly, you know how things are. I can't marry you. I have Davey."

"Well, I have Colleen, and she's a lot more trouble than your brother."

"Funny." Jessica's three feet away face was erasing any emotion. It was a face he'd seen all too often in the past two decades, as if she was saying, very politely,keep three feet away from me or you'll lose an arm.

His knee was getting sore. "I know how things are with your brother, Jess. I don't think you're supposed to martyr yourself because of it."

"Don't go there. I love my brother. He comes first."

"So you basically have a life sentence."

"Yes," she said, as if she was explaining it to a two-year-old. "Davey's life. My life. They're inseparable. You think I should put him in a kennel for you?"

"Did I say the word kennel? No, I didn't. But I think you could tell him you're getting married and he can come live with us." Or in the group home in Bryer, which seemed like a very nice place. Yes, Connor had checked it out.

Her phone buzzed again. Again, she checked it. "Iron Man can fly."

"Jessica. I'm asking you to marry me." His jaw was getting tight.

"I know. And really, thank you. It's very sweet. Are we going to eat?"

"Yes. I'm not saying yes." She pushed a strand of silky blond hair behind her ear.

Jaw at one hundred percent lockdown. "Then it's a no."

She was really turning him down.

Somehow, he'd seen this all going a bit differently.

Connor stood up, his knee creaking a little. Closed the little black velvet box and set it carefully on the table. He'd gone into Manhattan to buy that ringa simple and flawless emerald-cut diamond that suited her, because she was simply, flawlessly beautiful, too. Not a drop of makeup on, her long blond hair in a ponytail, wearing jeans and a faded T-shirt that saidHugo's on it, she was still the most gorgeous woman he'd ever seen.

"Shall I call for pizza?" she asked.

He sat down across from her. In the fridge were two lobsters, scallops, potatoes au gratin, artichoke and aru-gula salad, a bottle of Dom Perignon andpots de crème au chocolat, since his plan was to slide the ring on her finger, make love to her and then cook her the best meal of her life.

He did not want pizza.

He did not want a rejection.

His pulse was throbbing in his temples, a warning sign that he was mad. Brain-Vein, his irritating twin called it. He took a slow breath, looked around the room, trying not to lose his temper. The dining roommaybe that had been a mistake. It wasn't exactly warm and romantic. No pictures on the walls. His whole house looked like a furniture showroom, now that he thought about it.

Certainly, there were no pictures of him and Jessica. He leaned back in his chair and folded his arms across his chest. "How do you see us going forward, Jess?"

She was as cool and still as a stone in Keuka Lake. "What do you mean?"

"You and me, our future, our relationship, not that you can really call sneaking around at the age of thirty-two a relationship."

"I see us doing this. Getting together when we can. Enjoying each other's company." She wasn't the type to be goaded into an argument, that was for sure. Pity. A little yelling and some Olympic make-up sex would be more Connor's style. And that ring on her finger.

He made sure his voice was calm. Jess didn't do anger. "Do you ever think about us living together or marrying or having kids?"

"No. This works for me." She twisted the silver ring she wore on her thumb and gave him a pleasant smile.

"It doesn't work for me. Not anymore, Jess."

A person would need a magnifying glass to see any reaction from Jessica Dunn, but Connor was something of a student of her face. Right now her lips were pressed together the tiniest bit, indicating a disturbance in the Force.

"Well, thanks for letting me know," she said smoothly. "I'm sorry to hear that. You said you understood how things were and how they had to be. Nothing in my life has changed, so I'm not sure why you thought things would be different now."

"No, he can't, Connor. He has an IQ of fifty-two. And he hates you, or have you forgotten that? He can't even see you in the grocery store without having a meltdown. You remember the head-banging when he saw you with our dog?" Yes, Connor remembered. It had been one of the scariest moments of his life, as a matter of fact. "I don't have room for marriage and kids," Jess continued. "My brother is my responsibility in more ways than you could ever know. I'm surprised you brought marriage up at all. We've had this conversation a million times."

"Actually, we've never had this conversation."

Her cheeks were getting pink. Finally, something more than calm, cool and collected.

Good. It didn't seem fair that he was the only one feeling something here.

"Well, I thought you knew," she said. "I've always been very clear."

Blood thrummed through his temples, too hard, too fast. Another slow breath. "You're using your brother as an excuse. He'll adjust. He's held you hostage for years now."

She was really digging in now. "No, I don't," he said. "I bought this house with you in mind. There's an apartment upstairs, in case you forgot. It's for him. I love your brother."

"No, you don't. You've never even had a conversation with him, and he certainly doesn't love you. And let's not rewrite history. You decided to buy a two-family house without even talking to me."

Fair point. But it had seemed like a perfect solution; him and Jess downstairs, Davey upstairs. Instead, his sister had moved in after Jess turned him down.

Jessica sighed, some of the steel leaving her posture. "Connor, look. I think it's sweet that you made this gesture. Maybe it's because your sister's pregnant and you're feeling sentimental, but this just can't work. And I also think you're saying it because you're sure I won't say yes, and you're right. I won't."

"I wouldn't have asked if I didn't want you to say yes, Jessica."

Her phone buzzed again. She looked at the hateful device. "Great. Davey clogged the toilet, and Gerard can't get the valve to shut off. The last time the bathroom flooded, and I had to pay to replace the whole floor."

"I have to go. I'll see you Thursday, okay? This was a nice thought, Connor. I appreciate it. I really do." She stood up, kissed him on the head like he was a dogwhich he basically was, just some half-brain Labrador retriever you could ignore until you were lonely, and it was always happy to see you and would cheerfully forget the fact that you'd locked it in the cellar for a year or so. She grabbed her denim jacket from the hook by the door.

"Jessica." He didn't look at her, just stared at the candles flickering on the table. "This will be the last time you break up with me."

Well, shit. He hadn't really planned on saying that, but now that the words were out, they sprang up between the two of them like an iron door.

She froze for a second. "What do you mean?"

His head was killing him, every heartbeat stabbing behind his eyes. "I'm talking about all the times you've broken up with me, all the times you said life was too complicated, and you couldn't make any changes. I want a wife and kids and to be able to kiss you in public. If you leave now, make sure you mean it."

"Are you breaking up with me?" She actually sounded indignant.

"Okay, then." His jaw clamped shut. Her mouth opened a little. "Really."

She gave him a long look. "Have a nice night, Connor."

And with that, she left, and he picked up the stupid little black velvet box and threw it across the room.