Describes the life of the woman who wrote The Battle Hymn of the Republic, who worked tirelessly as an outspoken abolitionist and women's rights activist while she wrote and published poems and raised six children.

NPR stories about The Civil Wars of Julia Ward Howe 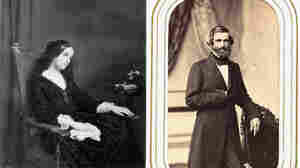 Battle Hymn At The Dining Table: A Famous Feminist Subjugated Through Food

March 16, 2016 • Julia Ward Howe wrote the Civil War psalm The Battle Hymn of the Republic. She was adrift in a lonely war of her own, against a husband who controlled every aspect of her life, including what she ate.

THE PRINCESS IN THE CASTLE

Julia Ward grew up living like a princess in a fairy tale. The daughter of a wealthy New York banker, the oldest of three devoted sisters, and the pet of three energetic brothers, she spent her childhood in a splendid Manhattan mansion where the finest tutors instructed her in music and languages, and her summers with her grandmother and cousins in Newport. She was cherished, indulged, and praised; but, she confessed in her memoir, she also felt like "a young damsel of olden time, shut up within an enchanted castle. And I must say that my dear father, with all his noble generosity and overweening affection, sometimes appeared to me as my jailer." The combination was paradoxical and prophetic. As she grew up, Julia would often relive the experience of the princess in the castle—loved and admired, but also restricted and confined.

An avid reader, she dreamed from an early age of becoming a great writer herself and tried to prepare herself intellectually for the role: "A vision of some important literary work which I should accomplish was present with me in my early life, and had much to do with habits of study acquired by me in youth, and never wholly relinquished." Her family tolerated her literary dreams, and supported her habits of study, but expected her to become a belle first and a housewife after. Her brothers were educated to be successful professionals; the sisters were trained to have all the feminine accomplishments. At the height of their youth and beauty, they were known as the Three Graces. Julia, the most beautiful and accomplished of all, was called the Diva.

Julia's father, Samuel Ward, had made his own way to riches. He went to work at fourteen as a clerk in the investment banking firm Prime and King, which had handled loans for the construction of the Erie Canal. Even then he knew that he wanted to become "one of the first bankers in the United States." By the age of twenty-two, he became a partner in the renamed Prime, Ward, and King. Ward was a disciplined, purposeful, serious young man, but his marriage in 1812 to sixteen-year-old Julia Cutler was a passionate love match. First to please her, and then to make up for the hard work and long self-deprivation of his apprenticeship, he set up an expensive household. Despite his pious Low Church upbringing, and his wife's even stricter Calvinist beliefs in hellfire, sin, and damnation, Ward had no guilt about his wealth. Spending money on the family was not sinful, he believed, but proper and spiritually sanctioned. Banking was a "lofty and ennobling" profession, valued "for the power it confers, of promoting liberal and beneficent enterprises."

Within a decade of their marriage, the Wards had six children: Samuel, born in 1814; Henry in 1817; Julia on May 27, 1819; Francis Marion in 1821; Louisa in 1823; and Annie in 1824. (Another daughter, also named Julia for her mother, had been born in 1816 and died of whooping cough at the age of three.) Somehow, in the intervals of repeated pregnancy, childbirth, and nursing, Julia Cutler Ward did fund-raising for the Society for Promotion of Industry among the Poor, which helped to train impoverished mothers as seamstresses. She also wrote poems and published them anonymously in the newspapers. ...