A man questions everything — his faith, his morality, his country — as he recounts his experience as an interrogator in Iraq. 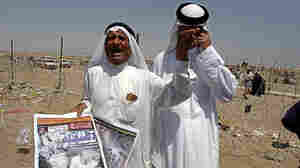 Relatives of Iraqi prisoners being held at Abu Ghraib denounce detainee treatment as they hold local newspapers featuring photos of U.S. soldiers abusing the prisoners inside the jail in May 2004. Roberto Schmidt/AFP/Getty Images hide caption

April 4, 2016 • The techniques Eric Fair used still weigh on his conscience. "There is no middle ground," he says. "Torture is an enhanced interrogation." His new memoir is Consequence.

By the time Raad Hussein sits before me, he has already been thoroughly interrogated.

Hussein tells me that he was attending a meeting with an officer from the 82nd Airborne Division. He says the name of the officer is Drinkwine. Hussein says he was cooperating with the officer and providing information about the attackers. He says the attackers are local extremists looking to impose a strict form of Islam inside Iraq. He says, "It's the Salafis."

Raad Hussein says that after he left the meeting with Drinkwine he was captured by American Special Forces. He says he knows they were Special Forces because they beat him. He says everyone in Fallujah knows that Special Forces beat people. He also says they drugged him. He tries to show me needle marks, but his skin is too bruised and scarred. I read more of the capture report. There is a page stapled to the back of the report. It says that Raad Hussein has been given a drug. It details his behavior under the influence of this substance. It says he was groggy and unresponsive and the results of the procedure were inconclusive. The report from 5th Special Forces Group concludes that Raad Hussein is of no further intelligence value.

That night, Henson and I gather in a common room where soldiers can watch television on the Armed Forces Network. We are talking about Raad Hussein. We convince each other that he is lying. His whole story is unreasonable. He cannot be the mayor of Fallujah and there cannot be an army officer named Drinkwine. Hussein's English was weak. He must have meant that he was drinking wine with the officer. We laugh about this. The Armed Forces Network is broadcasting PBS. There is a Frontline documentary about Iraq. Martin Smith from PBS is traveling throughout the Sunni Triangle to assess the progress of the war. Henson and I watch as he arrives in Fallujah. He talks to Iraqi citizens who criticize the occupation. Then he talks to the mayor of Fallujah. Raad Hussein. Later, Martin Smith interviews an American officer named Lieutenant Colonel Brian Drinkwine. The interview is interrupted by another soldier, who tells Drinkwine that an American helicopter has been shot down.

During the day I catch up on paperwork and read through screening reports about detainees who have yet to be interrogated. In the afternoon a new batch of detainees arrives. Ferdinand asks me to help him with the screenings. These are simple interviews consisting of basic questions. We photograph the detainees, inventory their belongings, and escort them to the detention facility. Ferdinand and I spend the day together pretending we are police officers again.

At the end of the day, we return to the office and file the completed screening reports. Tyner and Dent are in the office. Dent ordered Tyner to interrogate Raad Hussein after I determined he was of no further intelligence value. Tyner says, "Did you hear about your friend Raad?" Raad Hussein confessed to conspiring with the group responsible for killing the twenty- three police officers in Fallujah. It was likely a power play designed to win the approval of former Baath party elements looking to regain control of the province. Raad found himself in a difficult position. He wanted to secure his job, so he helped murder twenty- three police officers. Tyner cross- referenced Raad's confession with other sources. It's confirmed. Raad is guilty of facilitating the deaths of twenty- three Iraqi police officers.

We pass by the interrogation room where Tyner has been working on Raad Hussein. We haven't heard Tyner scream or throw anything today. The door to the room, a flimsy sheet of plywood, has blown open in the hot desert wind. Inside, Raad Hussein is bound to the Palestinian chair. His hands are tied to his ankles. The chair forces him to lean forward in a crouch, forcing all of his weight onto his thighs. It's as if he's been trapped in the act of kneeling down to pray, his knees frozen just above the floor, his arms pinned below his legs. He is blindfolded. His head has collapsed into his chest. He wheezes and gasps for air. There is a pool of urine at his feet. He moans: too tired to cry, but in too much pain to remain silent.

Henson comes out into the hallway and walks past the room. He covers the side of his face as he walks by and says, "I don't even want to know."

I am silent. This is a sin. I know it as soon as I see it. There will be no atonement for it. In the coming years, I won't have the audacity to seek it. Witnessing a man being tortured in the Palestinian chair requires the witness to either seek justice or cover his face. Like Henson in Fallujah, I'll spend the rest of my life covering my face.

Tyner says he's leaving Raad in the chair for a while, just to see if there's anything else he hasn't shared. I think of the dead police officers in Fallujah. I want to avenge these men, so I tell myself I have an obligation to use aggressive techniques against people like Raad Hussein. I tell myself that Raad is evil and it is necessary to lie to him, necessary to torture him. In a test of my own convictions I say, "He deserves it."

Ferdinand hears me say this. He grabs my shoulder in an aggressive way and says, "Hey, man." I drop my head, close my eyes, and touch my face with my fingertips. Ferdinand says, "I know, me too." We accept the undeniable truth that we are guilty.

Ferdinand and I walk to the dining facility and talk about Raad Hussein. On the way, on an exposed portion of the base, mortars rain down. Ferdinand lifts his arms in the air and pretends he is a baseball player trying to catch a pop fly. He says, "I got it, got it." We both laugh. Ferdinand says, "It would be a mercy killing."