Uproarious and poignant stories from the Inside Amy Schumer head writer's awkward youth include entries on her tomboy pursuits of femininity, her emulation of Oprah and the dangers of wedding websites.

NPR stories about You'll Grow Out of It 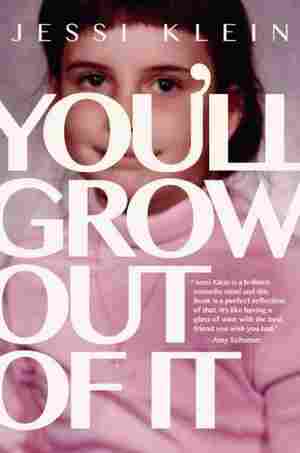 Excerpt: You'll Grow Out Of It

One late night, when I was working at SNL, I wandered out of my office for a break and saw that some random TV in the hallway was tuned to an interview with Angelina Jolie (I think it was with Charlie Rose, who as usual when he interviews a pretty lady, was shamelessly hitting on her.) I wandered over to watch, as did Emily Spivey, one of the senior writers there at the time and an all around hilarious and fabulous lady. We were both in awe of how insanely perfect and gorgeous and sexual and angelic Angelina Jolie is.

I know, I said. I started musing: It's like with dogs. A poodle and a wolf are both technically dogs, but based on appearances, it doesn't make any conceivable sense that they are, or ever were, related. We decided that some women are poodles and some women are wolves. And no matter what a wolf does (makeup, thong), it will still be a wolf, and no matter what a poodle does (sweatpants) it will always be a poodle.

I was on my way to meet my friend Tracy for breakfast and decided to wear my new dress which I love, a black dress with white butterflies and pockets from Agnes B, which is a pricey French retail chain that as a kid I remember feeling represented the highest echelons of fanciness. I never went in, ever. But a couple of months ago I was drawn in by the butterfly dress, and looking in the mirror I thought I looked really pretty and girly, like Zooey Deschanel but from EUROPE, and decided to spend an ungodly amount of cash on this poodle feeling I had. So I go into the subway with my butterfly dress and start to walk kind of slowly to one end of the platform, waiting for men's heads to turn and practice saying in my head "take a picture it'll last longer," and then this other woman walks in right behind me, and everything changes.

She is clearly a dancer, or a former dancer, but who cares, look at her, she has long perfect legs that are all one tawny color, not a speckled mixture of wintergreens and veiny blues like mine, and she is wearing short jeans shorts and a plain denim shirt, and her hair is sloppily piled on top of her head with a cheap clip. She is stunning. You can feel everyone's energy shift as all men on the platform cycle through their quick glance up/glance away thing that they think will keep them from being caught looking (WE CAUGHT YOU WE ALWAYS CATCH YOU.) Because I was immediately drawn to her legs, I missed looking at her face, so I deliberately had to walk around in front of her and then casually peek while pretending I am not desperately hoping that she will turn out to be a butterface. She is not. She is wearing red lipstick and looks basically like Mena Suvari at the exact moment in American Beauty that Kevin Spacey fantasizes about fucking her on a bed of rose petals.

This woman is a classic poodle. By which I mean, she is effortless. It doesn't matter what she is wearing, as she's not especially stylish. But because she's a poodle she looks good in anything. Short of donning a Nazi uniform Halloween outfit, she will always look like an ocean breeze (and even then, you'd forgive her just that one time because it's Halloween and she's so pretty and that means she's a good person who didn't mean it.) When someone is a poodle, you just want to be near her. I know this because I went out of my way to sit on the same subway car as her so that I could keep staring at her. I'm not a lesbian, I just know that looking at her gives me a feeling of pleasure. My own attempt at poodleness suddenly seems like a silly farce, as it is obvious I am just a wolf in poodle clothing. My butterfly Agnes B dress with pockets may as well be a ziploc filled with old shrimp.

Does this all sound too self deprecating? Because I don't mean it to be.

The truth is, I am in awe of poodle women. These magical lovely women who inherently radiate femininity. They are not necessarily the most beautiful women or even the prettiest; they just seem, without trying at all, to always be in sync with their yin quality (that's the girl one right?), like an iphone constantly in communication with its cloud.

If you're sill confused about what a poodle is, just think about this: The Girl from Ipanema was obviously written about a poodle. No one would ever write that about a wolf.

Jennifer Aniston is actually an interesting example here. I have friends who think she is a poodle and argue that she is a poodle because she is beautiful. BUT BEING BEAUTIFUL IS NOT WHAT MAKES YOU A POODLE OR A WOLF. It's how much of the beauty feels internally generated, an ephemeral essence, versus how much of the beauty feels like work, like maintenance. It's a very French concept, which is probably why we think every poodle dog was born in France and always imagine them in berets. Aniston is stunning but I always have the impression that her beauty comes with an enormous price tag. And yes, in Hollywood everyone's beauty is expensive, but there are a few ladies who seem like they're keeping very high tabs permanently open at every groomer in town. Getting your hair to be the color of a sunbeam passing through a lion's mane don't come cheap. And yes, of course Janiston would be stunningly beautiful even if she did nothing, but it's the fact that she chooses to do everything that tells me she's a wolf. If you look at her high school picture, where she has thick eyebrows and an (ever so slightly) bigger nose, you can see she FEELS like a wolf. I'm certain she still feels like one. She probably would have no matter what happened in her life, because once a wolf always a wolf, but nothing will really make you feel like a wolf like your husband leaving you for a poodle.

I have always clearly been a wolf. It makes sense, because I was raised by wolves (my mother and father, both full wolves.)

Despite having amazing bodies, poodles don't ever work out, they just "walk everywhere."

I live near a very nice park that runs along the water. There is a cluster of picnic tables where occasionally I will go to write if the weather is nice. The other morning I was enjoying an iced coffee, hunched in front of my laptop screen, when I noticed a kerfuffle at one of the picnic tables about forty feet away. About seven people were setting up a fashion shoot around a female model. They didn't seem to be asking any of the other picnic table people to move so I went back to my writing. About ten minutes later, the photographer, a handsome Frenchman (male poodle?) came over and gently asked if I could move over about two feet. I was in the background of the shot. I looked around and saw that there were a few other bystanders who looked as if they might also be in the background of the shot. But I was the only one who had to move. I understood.

YOU CAN'T HAVE A WOLF IN THE SHOT.

I often wonder, if I could wave a wand, and magically transform myself from wolf to poodle, would I? Most of me says no. I'm proud of being a wolf. My wolf upbringing is responsible for my personality, for my compassion for the rest of the pack. As a wolf I am a diamond in the rough. I crack jokes. My whole life is about trying, about speaking up in order to be seen, about howling with laughter or howling out how I see the world.

But there is a part of me that immediately yells Yes, I would give anything to feel that poodle confidence, to feel comfortable as a woman, like my body is my perfect home, to be the girl from Ipanema, and sway down the street emitting an intoxicating hormone, like a female deer spritzing the air during mating season from under my perky white tail. I'd love to be one of those women who sleeps naked, who never has to buy her own drink, who wears makeup only when she feels like it, who took ballet for years and still carries that motion in her bones, dancing down the street, accidentally posed even when sitting and sleeping, completely un-self conscious.