The 400-Year Untold History of Class in America

"A history of the class system in America from the colonial era to the present illuminates the crucial legacy of the underprivileged white demographic, citing the pivotal contributions of lower-class white workers in wartime, social policy, and the rise of the Republican Party,"—NoveList. 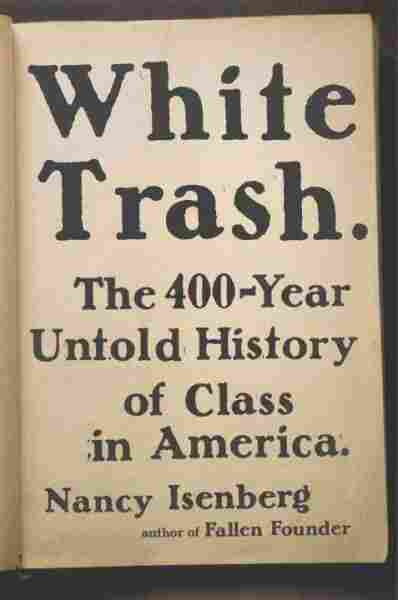 Clinton's embarrassing second term didn't seem to provide lessons, insofar as the Republicans plunged ahead with their own (effectively) white trash candidate in 2008, Alaska governor Sarah Palin. The devastatingly direct Frank Rich of the New York Times referred to the Republican ticket as "Palin and McCain's Shotgun Marriage." Did the venerable John McCain of Arizona, ordinarily a savvy politician, have a lapse in judgment here? Slate produced an online video of Palin's hometown of Wasilla, painting it as a forgettable wasteland, a place "to get gas and pee" before getting back on the road. Wasilla was elsewhere described as the "punch line for most redneck jokes told in Anchorage." Erica Jong wrote in the Huffington Post, "White trash America certainly has allure for voters," which explains the photoshopped image of Palin that appeared on the Internet days after her nomination. In a stars-and-stripes bikini, holding an assault rifle and wearing her signature black-rimmed glasses, Palin was one-half hockey mom and one-half hot militia babe.

News of the pregnancy of Palin's teenage daughter Bristol led to a shotgun engagement to Levi Johnston, which was arranged in time for the Republican National Convention. Us Weekly featured Palin on the cover, with the provocative title, "Babies, Lies, and Scandal." Maureen Dowd compared Palin to Eliza Doolittle of My Fair Lady fame, in getting prepped for her first off-script television interview. Could there be any more direct allusion to her questionable class origins? The Palin melodrama led one journalist to associate the Alaska clan with the plot of a Lifetime television feature. The joke was proven true to life two years later, when the backwoods candidate gave up her gig as governor and starred in her own reality TV show, titled Sarah Palin's Alaska.

Palin's candidacy was a remarkable event on all accounts. She was only the second female of any kind and the first female redneck to appear on a presidential ticket. John McCain's advisers admitted that she had been selected purely for image purposes, and they joined the chorus trashing the flawed candidate after Obama's historic victory. Leaks triggered a media firestorm over Palin's wardrobe expense account. An angry aide categorized the Palins' shopping spree as "Wasilla hillbillies looting Neiman Marcus from coast to coast."

The Alaskan made an easy and attractive target. Journalists were flabbergasted when she showed no shame in displaying astounding lapses in knowledge. Her bungled interview with NBC host Katie Couric represented more than gotcha journalism: Palin didn't just misconstrue facts; she came across as a woman who was unable to articulate a single complex idea. (The old cracker slur as "idle-headed" seemed to fit.) But neither did Andrew Jackson run as an "idea man" in an earlier century, and it was his style of backcountry hubris that McCain's staffers had been hoping to revive. Shooting wolves from a small plane, bragging about her love of moose meat, "Sarah from Alaska" positioned herself as a regular Annie Oakley on the campaign trail.

It was not enough to rescue her from the mainstream (what she self-protectively called "lamestream") media. Sarah Palin did not have a self-made woman's résumé. She could not offset the "white trash" label as the Rhodes Scholar Bill Clinton could. She had attended six unremarkable colleges. She had no military experience (à la navy veteran Jimmy Carter), though she did send one son off to Iraq. Writing in the New Yorker, Sam Tanenhaus was struck by Palin's self-satisfied manner: "the certitude of being herself, in whatever unfinished condition, will always be good enough."

Maureen Dowd quipped that Palin was a "country-music queen without the music." She lacked the self-deprecating humor of Dolly Parton—not to mention the natural talent. The real conundrum was why, even more than how, she was chosen: the white trash Barbie was at once visually appealing and disruptive, and she came from a state whose motto on license plates read, "The Last Frontier." The job was to package the roguish side of Palin alongside a comfortable, conventional female script. In the hit country single "Redneck Woman" (2004), Gretchen Wilson rejected Barbie as an unreal middle-class symbol—candidate Palin's wardrobe bingeing was her Barbie moment.

Her Eliza Doolittle grand entrance came during the televised debate with Senator Joe Biden of Delaware. As the nation waited to see what she looked like and how she performed, Palin came onstage in a little black dress, wearing heels and pearls, and winked at the camera. From the neck down she looked like a Washington socialite, but the wink faintly suggested a gum-chewing waitress at a small-town diner. Embodying these two extremes, the fetching hockey mom image ultimately lost out to what McCain staffers identified as both "hillbilly" and "prima donna."

Sex formed a meaningful subtext throughout Palin's time of national exposure. In terms of trash talk, daughter Bristol Palin's out-of-wedlock pregnancy was handled rather differently from Bill Clinton's legendary philandering. Bloggers muddied the waters by spreading rumors about Sarah's Down syndrome child, Trig: "Was he really Bristol's?" they asked. A tale of baby swapping was meant to suggest a new twist on the backwoods immorality of inbred illegitimacy. Recall that it was Bill Clinton's mother, Virginia, whose pedigree most troubled the critics. The legacy held: the rhetoric supporting eugenics (and the sterilization laws that followed) mainly targeted women as tainted breeders.

Sarah Palin's Fargo-esque accent made her tortured speech patterns sound even worse. Former TV talk show host Dick Cavett wrote a scathing satirical piece in which he dubbed her a "serial syntax killer" whose high school English department deserved to be draped in black. He wanted to know how her swooning fans, who adored her for being a "mom like me," or were impressed to see her shooting wolves, could explain how any of those traits would help her to govern.

We had been down this road before as citizens and voters. "Honest Abe" Lincoln was called an ape, a mudsill, and Kentucky white trash. Andrew Jackson was a rude, ill-tempered cracker. (And like Palin, his grammar was nothing to brag about.) The question loomed: At what point does commonness cease to be an asset, as a viable form of populism, and become a liability for a political actor? And should anyone be shocked when voters are swept up in an "almost Elvis-sized following," as Cavett said Palin's were? When you turn an election into a three-ring circus, there's always a chance that the dancing bear will win.