The irrepressible Louisa Clark from Me Before You and After You arrives in New York to start a new life and a long-distance relationship with Ambulance Sam while working for the super-wealthy Gopniks, a job that introduces her to New York high society and a secretive man who reminds her of her own past.

NPR stories about Still Me 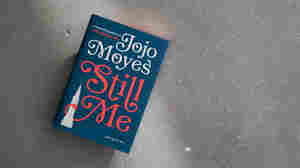 January 28, 2018 • Author Jojo Moyes has penned a third story about the idealistic young Louisa Clark, thrusting her protagonist into Manhattan's upper-upper-class while juggling romance back home (and abroad). 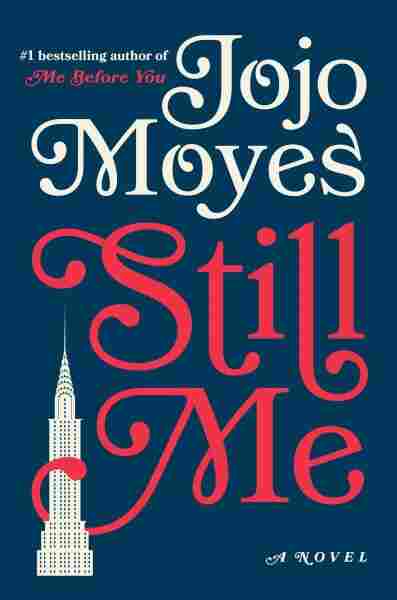 A very large African American man in very tight scarlet Lycra stood in front of me, his hands on his hips. I froze, blinking, in the kitchen doorway in my t-shirt and knickers, wondering if I was dreaming and whether if I closed it and opened it again he would still be there.

“You must be Miss Louisa?”

A huge hand reached out and took mine, pumping it so enthusiastically that I bobbed up and down involuntarily with it. I checked my watch. No, it really was a quarter past six.

“I’m George. Mrs Gopnik’s trainer. I hear you’re coming out with us. Looking forward to it!”
I had woken groggily after a fitful few  hours, struggling to shake off the tangled dreams that had woven themselves through my sleep, and stumbled  down the corridor on automatic pilot, a caffeine-seeking zombie.

He picked up two water bottles from the side. And then he was gone, jogging lightly down the corridor. I stood for a moment then poured myself a coffee and as I stood there sipping at it Nathan walked in, dressed and scented with aftershave. He gazed at my bare legs.

“Nothing he can’t teach you about glutes. You got your running shoes, right?”

I took a sip of my coffee but when I looked up Nathan was looking at me expectantly.

“Nathan, nobody said anything about running. I’m not a runner. I mean, I am the Anti-Sport, the Sofa Dweller. You know that.”

Nathan poured himself a black coffee then replaced the coffee jug in the machine.

“Plus I fell off a building earlier this year? Remember? Lots of bits of me went crack?” I could joke about that night now, when, still grieving Will, I had drunkenly slipped from the parapet of my London home. But the twinges in my hip were a constant reminder.

“You’re fine. And you’re Mrs G’s assistant. Your job is to be at her side at all times, mate. If she wants you to go running, then you’re running.”

He took a sip of his coffee. “Ah, don’t look so panicked. You’ll love it. You’ll be fit as a butcher’s dog within a few weeks. Everyone here does it.”

“It’s quarter past six in the morning.”

“Twenty to seven. Meet them in the main hallway. See you later!” He lifted a hand, and was gone.


Agnes, of course, was one of those women who looked even better in the mornings; naked of face, a little blurred at the edges, but in a sexy Vaseline-on-the-lens way. Her hair was pulled back in a loose ponytail and her fitted top and jogging pants made her look casual in the same studied way that off-duty supermodels do. She loped down the corridor like a palomino racehorse in sunglasses and lifted an elegant hand in greeting, as if it were simply too early for speech. I only had a pair of shorts and a sleeveless T-shirt with me, which, I suspected, made me look like a plump labourer. I was slightly anxious that I hadn’t shaved my armpits and clamped my elbows to my sides.

“Good morning, Mrs G!” George appeared beside us and handed Agnes a bottle of water. “You all set?”

I had heard the expression ‘hit the ground running’ but until George I had never truly understood what it meant. He set off down the corridor at what felt like 40 miles an hour and just when I thought we would at least slow for the lift, he held open the double doors at the end of the corridor so that we could sprint down the twelve flights of stairs that took us to the ground floor. We were out through the lobby and past Ashok in a blur, me just able to catch his muffled greeting.

Dear God, but it was too early for this. I followed the two of them jogging effortlessly like a pair of carriage horses, while I sprinted behind, my shorter stride failing to match theirs, my bones jarring with the impact of each footfall, muttering my apologies as I swerved between the Kamikaze pedestrians who walked into my path. Running had been Patrick, my ex’s, thing; it was like kale – one of those things you know exists and is possibly good for you but frankly life is always going to be too short to really get stuck in.

Oh come on, you can do this, I told myself. This is your first say yes! moment. You are jogging in New York! This is a whole new you! For a few glorious strides I almost believed it. The traffic stopped, the crossing light changed, and for a moment we paused at the kerbside, George and Agnes bouncing lightly on their toes, me, unseen behind them. Then we were across and into Central Park, the path disappearing beneath our feet, the sounds of the traffic fading as we entered the green oasis at the heart of the city.

We were barely a mile in when I realised this was really not a good idea. Even though I was now walking as much as running, my breath was already coming in wheezy gasps, my hip protesting all-too recent injuries. The furthest I had run in years was fifteen yards for a slowing bus, and I’d missed that. I glanced up to see George and Agnes were talking while they jogged, for crying out loud. I couldn’t breathe, and they were holding an honest-to-God conversation.

I thought about a friend of Dad’s who had had a heart attack while jogging. Dad had always used it as a clear illustration of why sport was bad for you. Why had I not explained my injuries? Was I going to cough a lung out right here in the middle of the park?

“You okay back there, Miss Louisa?” George turned so that he was jogging backwards.

“Fine!” I gave him a cheery thumbs-up.

I had always wanted to see Central Park. But not this way. I wondered what would happen if I actually keeled over and died on my first day on the job. How would they get my body home? I swerved to avoid a woman with three identical meandering toddlers. Please God, I willed the two people running effortlessly in front of me, silently. Just one of you fall over. Not to break a leg exactly, just a little sprain. One of those things that just lasts 24 hours and requires lying on a sofa with your leg up watching daytime telly.

They were pulling away from me now and there was nothing I could do. What kind of park had actual hills in it? Mr Gopnik would be furious with me for not sticking with his wife. Agnes would realise I was a silly dumpy Englishwoman, rather than an ally. They would hire someone slim and gorgeous with better running clothes.

It was at this point that the old man jogged past me. He turned his head to glance at me and then glanced at his fitness tracker and kept going, nimble on his toes, his earphones plugged into his ears. He must have been seventy-five years old.

“Oh come on.” I said, watching him speed away from me. And then I caught sight of the horse and carriage. I pushed forward until I was level with the driver.

“Hey! Hey! Any chance you could just trot up to where those people are running?”

I pointed to the tiny figures now in the far distance. He glanced over at where I was pointing then shrugged.

I climbed up on the carriage and ducked down behind him while he urged his horse forward with a light slap of the reins. Yet another New York experience that wasn’t quite as planned, I thought, as I crouched behind the driver. We drew  closer, and I tapped him to let me out. It could only have been about 500 yards but it at least got me behind them. I made to jump down.

They were still deep in conversation. I pulled two $20 notes from my back pocket and hurled them at him. And then ducked behind the carriage and started to jog just in time for George to turn around and spot me. I gave him another cheery thumbs-up as if I had been there all along.

George finally took pity on me. He spotted me limping and jogged back while Agnes did stretches, her long, thin legs extending like some double-jointed flamingo.

“Miss Louisa! You okay there?”

At least I thought it was him. I could no longer see because of the sweat leaking into my eyes. I stopped, my hands resting on my knees, my chest heaving

“You got a problem? You’re looking a little… flushed.”

“You got an injury? You should have said!”

“Didn’t want to …. miss any of it!” I said, wiping at my eyes with my palms. It just made them sting more.

He put his hands on my hip and then moved my left leg backwards and forwards so that he could feel it rotating. I tried not to wince.

“You know, I don’t think you should do any more today.”

“Oh if you insist. How disappointing.”

“We’ll meet you at the apartment.” He clapped me on the back so vigorously that I nearly fell onto my face. And then with a cheery wave they were gone.


“You have fun, Miss Louisa?” said Ashok as I limped in, 45 minutes later. Turns out you could get lost in Central Park after all.

I paused to pull my sweat-soaked t-shirt away from my back.

When I got back to the apartment I discovered that George and Agnes had returned home a full 20 minutes before me.