Attending a remote sleepaway camp in the Pacific Northwest, a group of young girls embark on an overnight kayaking trip to a nearby island, only to be separated from their adult counselors and subjected to a life-changing event. By the award-winning author of For Today I Am a Boy. 35,000 first printing.

NPR stories about The Lost Girls of Camp Forevermore 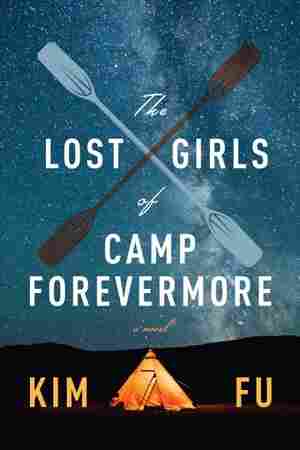 February 18, 2018 • Kim Fu's new novel about a sleepaway camp sojourn that turns shattering for five young girls. But though the troubles seem tame — thirst and a lack of gummi bears — the horror comes later. 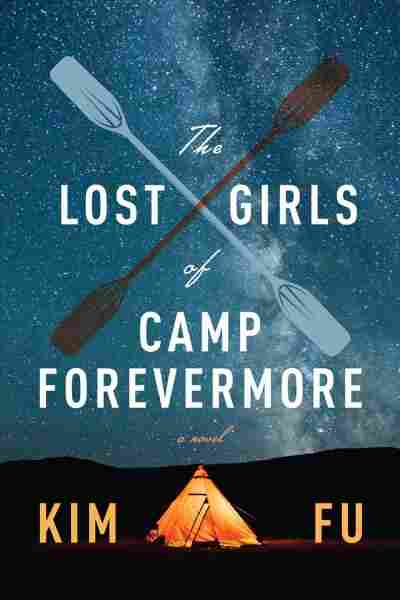 CAMP FOREVERMORE
The girls stood on the dock and sang the camp song, “Camp Forevermore.” They sang in voices at worst bored or dutiful, but more often thrilled, chests swelling with unity and conviction, that feeling of being part of something larger than themselves, their brash, off-key voices combined into one grand instrument: “And I shall love my sisters/for-ev-er-more.” In 1994, the song had echoed out over the Pacific Ocean for six decades.

They stood straight-backed and solemn-faced as soldiers in formation, even the ones who itched to squirm, to collapse into their natural, slumped posture, who were rolling their toes in their shoes and humming to themselves, squeezing their lips in their fingers to suppress a bubble of nervous laughter. Counselors dragged plastic bins of orange life jackets from one of the storehouses adjacent to the dock. The life jackets varied in size and some had broken buckles and split seams. The girls picked through to find intact jackets that fit, the process both hurried and cautious, drawing attention to their newly divergent bodies.

Ten-year-old Siobhan Dougherty snatched one and slid her arms through the holes. Would it reveal her to be too tall, too wide, too infantile, anything other than the universal girl-size implied by the unsorted bins? She fumbled to adjust the buckles and lengthen the straps, her fingers cold and stiff, until finally the jacket clicked shut. Satisfying clicks echoed up and down the dock. By some miracle, no one was left behind.

Two days earlier, Siobhan had stepped through the wooden gates of Camp Forevermore for the first time. The group of low log buildings in a man-made clearing, at the nexus of forest and sea, looked just the way it had in the brochure.

Upper-middle-class girls (and, as of 1976, a small group of need-based essay-contest winners) from up and down the northwest coast of North America, including both sides of the U.S.-Canada border, were sent to Forevermore, the name meant, like its religious and pseudo–Native American competitors, to project ancient knowledge. Nine-to-eleven-year-old girls would leave home fretful and finicky and return as capable, knowledgeable outdoorswomen, remade in the wholesomeness of woods and sisterhood. The best of its kind, crowed the brochure.

Siobhan wanted to be more like the heroines of the books she liked, about girl detectives and girl adventurers: tomboyish, scrappy, and resourceful, able to outsmart adults and survive without them, her body sun-brown and waiflike. She was, instead, a freckled, blue-eyed redhead, pale and dense as a block of shortening, who wasn’t allowed to use the stove. The one time she’d been left alone at home after dark, she’d turned on all the lamps, the TV, and the stereo, needing a protective shell of voices and light.

Above all, she was looking forward to the kayaking trip, the central adventure of the first week. In small groups, the girls would kayak to a remote island and camp overnight. The brochure had stressed to parents that the overnight would build character and an appreciation of the outdoors within safe boundaries, but none of the pictures had adults in them. Just the campers, posing in their kayaks with their paddles triumphantly raised. Carrying firewood and military-style duffel bags in their twiggy arms, holding hands and jumping into the ocean. Bearing bold smiles of uneven teeth and no-nonsense braids and ponytails, these were girl pirates, girl spaceship captains, warrior princesses—the thrilling, independent societies of children that had existed only in Siobhan’s books.

Even on that first, clear afternoon, the dark earth between the gravel paths and the deep green of towering pine, fir, and spruce trees contained the memory of recent snow and rain. The ocean at the far end of the camp was the color of slate.

Everything Siobhan was wearing was brand new: a black fleece she’d chosen for its silver heart-shaped zipper pull, her first pair of hiking boots, even her underwear. She felt a thrilling, terrifying dissolution of self. She was far from her parents, her classmates, anyone who had ever known her. She was curious to find out who she would be.

The first day passed in a blur. The girls were shuffled from place to place, given a lecture and a quick meal, hurried to an early bedtime and an awkward silence in the cabins with their counselor-chaperones. The morning of the second day, they faced a swimming test, shivering and exposed as they eyed one another on the dock, then timed as they swam for fifty meters parallel to the shore.

In sporty Speedo one-pieces, in childish frills and sea-creature patterns, the girls first noticed Dina Chang, a nine-year-old from Vancouver Island. There was nothing precisely remarkable about her appearance, her wholly prepubescent chest and legs and golden-brown skin in a black-and-white two-piece, but they could not keep their eyes off of her. Her every movement was magnetic. Girls brought her tied-together daisies, plastic bracelets, and toys they’d brought from home. Someone offered her the carton of chocolate milk from her morning snack. Dina shrugged and twirled a strand of her glossy black hair, like the attention was nothing new, no big deal.

During one of the swim tests, the girls’ conversations trailed off as one by one they stopped talking to watch. The girl in the water was struggling. She kept stopping to tread and change strokes, from a frantic, ineffectual crawl—kicking up geysers of water without gaining any forward momentum—to a pathetic-looking doggie paddle, fighting to keep her head up, a tangle of dirty-blond hair plastered across her face. Andee Allen was ten years old and from Seattle, Washington. “One of the scholarship girls,” someone stage-whispered. One of the girls they should feel sorry for and be extra kind to.

As the minutes ticked by and Andee continued to flounder in the water, the girls turned their attention to the counselors administering the test, particularly the one holding a stopwatch. They hadn’t failed anyone, no matter how slow or poor her technique, as long as the camper could cross the distance somehow. But surely this was too much, and any minute now, they would jump in and tow or carry Andee to shore, and she wouldn’t be allowed on the kayak trip.

The adults looked transfixed by Andee. When Andee finally swam a little closer, Siobhan could see why: the determined set of her mouth, the ferocity in her eyes. How much she wanted to finish. She would finish, no matter what. It would be cruel to stop her. And more to the point, if they ever were stranded in the ocean, Andee—who had been in the water for what felt like an eternity—would be the last to go down.

When Andee’s hand slapped the far pillar of the dock, the counselors cheered. Two of them reached in and pulled her out by her forearms and the back of her swimsuit. Andee lay gasping on the planks like a fish in the open air.

They had kayak lessons for the rest of the day, their first tangle with the life jackets. At the outset, their neon-green kayaks crowded the shallows of the beach, knocking against one another like rubber ducks let loose in a bathtub. By late afternoon, each girl could escape a rollover, do a forward paddle stroke, and self-propel in a straight line.

At dinner, Siobhan was among the girls assigned to set the tables. Nita Prithi—eleven years old, from a midsize town in central California, in her third and final year at Forevermore—bossily led the group around, making the expansive gestures of a magician’s assistant. “Here’s where the forks and spoons are. Here are the cups. Here are the pitchers for water,” she said. Nita was intimidating-looking, broad-shouldered with a heavy, clomping step, an oversize sweatshirt pulled down over early breasts, a wide mouth, and dark, expressive eyebrows.

Another group of girls carried the steamer trays of food from the kitchen.