by Behrouz Boochani and Omid Tofighian

NPR stories about No Friend but the Mountains 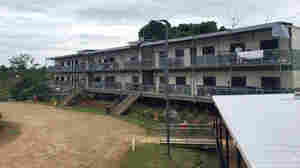