A narrative chronicle of the Battle of the Chesapeake traces the maneuvers by Lafayette and Washington that are credited with America's Revolutionary War victory. By the National Book Award-winning author of Valiant Ambition and Mayflower.

NPR stories about In the Hurricane's Eye 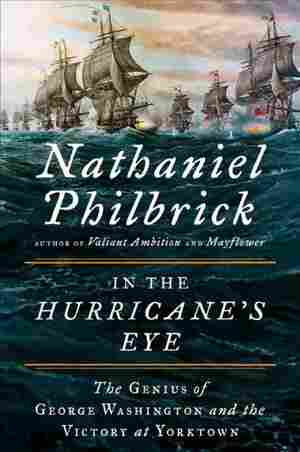 October 19, 2018 • In his new book, Nathaniel Philbrick grabs the reader's head and turns it towards the sea, providing a fresh take on an old story of the Revolutionary War.

Excerpt: In The Hurricane's Eye 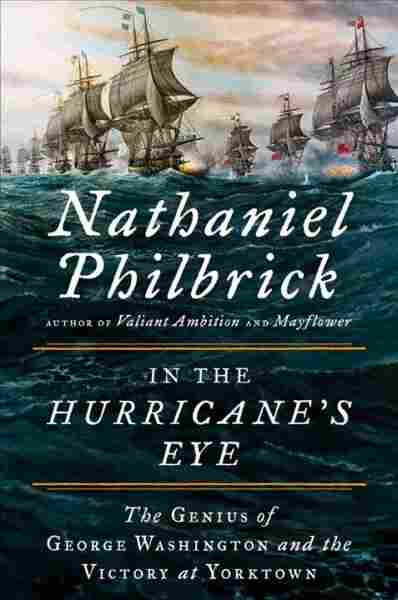 
The Land and the Sea

For five years, two armies had clashed along the edge of a vast continent.  One side, the Rebels, had the advantage of the land.  Even when they lost a battle, which happened more often than not, they could retire into the countryside and wait for the next chance to attack.

The other side, the Empire, had the advantage of the sea.  With its fleet of powerful warships (just one of which mounted more cannons than the entire Rebel army possessed), it could attack the Rebels’ seaside cities at will.

But no matter how many coastal towns the Empire might take, it did not have enough soldiers to occupy all of the Rebels’ territory.  And without a significant navy of its own, the Rebels could never inflict the blow that would win them their independence.  The war had devolved into a stalemate, with the Empire hoping the Rebels’ rickety government would soon collapse, and with the Rebels hoping for the miraculous intervention of a powerful ally.

Two years before, one of the Empire’s perennial enemies, the Rival Nation, had joined the war on the Rebels’ behalf.  Almost immediately the Rival had sent out its own fleet of warships.  But then the sea had intervened.

When France entered the American Revolutionary War in the spring of 1778, George Washington had dared to hope his new ally would put victory within reach.  Finally, the British navy’s hold on the Atlantic seaboard was about to be broken.  If the French succeeded in establishing what Washington called “naval superiority,” the enemy’s army would be left open to attack from not only the land but also the sea.  But after two and a half years of trying, the French had been unable to contain the British navy.

First, an inexplicably protracted Atlantic crossing had prevented French Admiral d’Estaing from trapping the enemy’s fleet in Philadelphia.  Shortly after that, d’Estaing had turned his attention to British-occupied New York only to call off the attack for fear his ships would run aground at the bar across the harbor mouth.  A few weeks after that, a storm off the coast of southern New England had prevented d’Estaing from engaging the British in the naval battle that promised to be a glorious victory for France.  Since then, a botched amphibious assault at Savannah, Georgia, had marked the only other significant action on the part of the French navy, a portion of which now lay frustratingly dormant at Newport at the southern end of Rhode Island’s Narragansett Bay.  By the fall of 1780, amid the aftershocks of devastating defeats at Charleston and Camden in South Carolina and Benedict Arnold’s treasonous attempt to surrender the fortress at West Point to the enemy, Washington had come to wonder whether the ships of his salvation would ever appear.

For the last two years he’d been locked in an unproductive standoff with Sir Henry Clinton in and around British-occupied New York.  What fighting had occurred had been, for the most part, in the South, where British general Cornwallis sought to build upon his recent victories by pushing into North Carolina.  Between the northern and southern theaters of the war lay the inland sea of the Chesapeake, which had enjoyed a period of relative quiet since the early days of the conflict.

All that changed in December of 1780, when Clinton sent his newest brigadier general, the traitor Benedict Arnold, to Virginia.  Having already dispatched the Rhode Islander Nathanael Greene to do battle with Cornwallis in the Carolinas, Washington sent the young French nobleman whom he regarded as a surrogate son, the Marquis de Lafayette, in pursuit of Arnold.

Thus began the movement of troops that resulted nine months later in Cornwallis’s entrapment at the shore-side hamlet of Yorktown when a large fleet of French warships arrived from the Caribbean.  As Washington had long since learned, coordinating his army’s movements with those of a fleet of sail-powered men-of-war based two thousand miles away was virtually impossible.  But in the late summer of 1781, the impossible happened.

And then, just a few days later, a fleet of British warships appeared.

The Battle of the Chesapeake has been called the most important naval engagement in the history of the world.  Fought outside the entrance of the bay between French admiral Comte de Grasse’s twenty-four ships of the line and a comparable fleet commanded by British Admiral Thomas Graves, the battle inflicted severe enough damage on the Empire’s ships that Graves returned to New York for repairs.  By preventing the rescue of 7,000 British and German soldiers under the command of General Cornwallis, de Grasse’s victory on September 5, 1781, made Washington’s subsequent triumph at Yorktown a virtual fait accompli.  Peace would not be officially declared for another two years, but that does not change the fact that a naval battle fought between the French and the British was largely responsible for the independence of the United States.

Despite its undeniable significance, the Battle of the Chesapeake plays only a minor part in most popular accounts of the war, largely because no Americans participated in it.  If the sea figures at all in the story of the Revolutionary War, the focus tends to be on the heroics of John Paul Jones off England’s Flamborough Head, even though that two-ship engagement had little impact on the overall direction of the conflict.  Instead of the sea, the traditional narrative of Yorktown focuses on the allied army’s long overland journey south, with a special emphasis on the collaborative relationship between Washington and his French counterpart the Comte de Rochambeau once they arrived in Virginia.  In this view, the encounter between the French and British fleets was a mere prelude to the main event.  In the account that follows, I hope to put the sea where it properly belongs:  at the center of the story.

As Washington understood with a perspicacity that none of his military peers could match, only the intervention of the French navy could achieve the victory the times required.  Six months before the Battle of the Chesapeake, during the winter of 1781, he had urged the French to send a large fleet of warships to the Chesapeake in an attempt to trap Benedict Arnold in Portsmouth, Virginia.  What was, in effect, a dress rehearsal for the Yorktown campaign is essential to understanding the evolving, complex, and sometimes acrimonious relationship between Washington and Rochambeau.  As we will see, the two leaders were not the selfless military partners of American legend; each had his own jealously guarded agenda, and it was only after Washington reluctantly—and angrily—acquiesced to French demands that they began to work in concert.

Ultimately, the course of the Revolutionary War came down to America’s proximity to the sea—a place of storms and headwinds that no one could control.  Instead of an inevitable march to victory, Yorktown was the result of a hurried rush of seemingly random events—from a hurricane in the Caribbean, to a bloody battle amid the woods near North Carolina’s Guilford Courthouse, to the loan of 500,000 pesos from the Spanish citizens of Havana, Cuba—all of which had to occur before Cornwallis arrived at Yorktown and de Grasse sailed into the Chesapeake.  That the pieces finally fell into place in September and October 1781 never ceased to amaze Washington.  “I am sure,” he wrote the following spring, “that there never was a people who had more reason to acknowledge a divine interposition in their affairs than those of the United States.”

The victory at Yorktown was improbable at best, but it was also the result of a strategy Washington had been pursuing since the beginning of the French alliance. This is the story of how Washington’s unrelenting quest for naval superiority made possible the triumph at Yorktown.  It is also the story of how, in a supreme act of poetic justice, the final engagement of the war brought him back to the home he had not seen in six years.  For it was here, on a river in Virginia, that he first began to learn about the wonder, power, and ultimate indifference of the sea.