A follow-up to The Chilbury Ladies' Choir finds scandalous divorcee Mrs. Braithwaite traveling to World War II London in search of her missing daughter, an effort that is complicated by a difficult secret.

NPR stories about The Spies of Shilling Lane 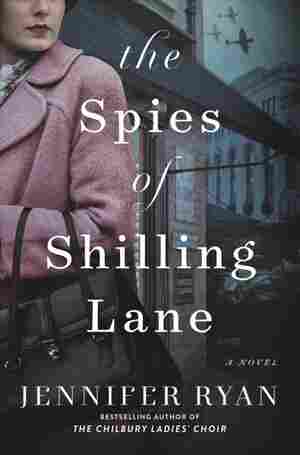 June 9, 2019 • How far would you go to get away from your overbearing mother? In Jennifer Ryan's novel, a young woman braves the London Blitz to avoid her mom — who hops a train and comes looking for her.

Excerpt: The Spies Of Shilling Lane 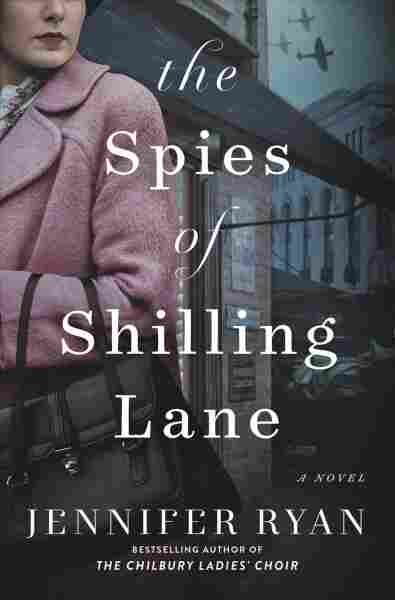 How do you measure the success of your life? Mrs. Baithwaite wrote determinedly in her notebook as the trrain sputtered out of the little station. She hadn’t left her village for a year; hadn’t been to London since the war began back in 1939. The journey to see her daughter was long overdue.

Every so often the train would hurtle through a station, now nameless because all the station signs had been taken down at the beginning of the war to confuse any invading Nazis. None had come over yet, thank heavens. For now the Nazis were content sending planes across every night to bomb British cities to pieces—the Blitz, they called it, “lightning.” Their intention at first was to take out factories and docks, but now they were bombing at random, trying to exhaust the Royal Air Force and break the spirit of the people.

Mrs. Braithwaite muttered to herself. “Well, my spirit has well and truly been broken, but not by the Nazis.”

The previous morning, Mrs. Metcalf and the village matrons had demoted her from her rightful position as head of the local Women’s Voluntary Service.

“It was a joint decision,” Mrs. Metcalf had said two ladies on either side of her. She had placed herself at the center of a folding table in the village hall while Mrs. Braithwaite was required to stand before them. “You have been in the top WVS position since the war began, and now we feel that it’s time to pass the baton to a more,” she paused, thinking of the right word, “a more thoughtful and considerate leader.” Naturally, she meant herself.

Mrs. Braithwaite had a sturdy frame, which she felt gave her lack of height more gusto. Her short hair was still a rich brown despite her fifty years, her face large and uncompromisingly oblong, her mouth drawn effortlessly into a frown. She narrowed her eyes at her old neighbor and so-called friend. “I’ve put my all into this group and this is how I’m repaid?”

“The truth is, we’re fed up with you bossing everyone around,” Patience Metcalf stated with far less subtlety than her mother. A twenty-two-year-old who had married well and stayed in the village, Patience was the opposite of her own Betty, who had vanished off to London at the first whiff of war. Mrs. Metcalf’s children—both Patience and her son, Anthony—were practically perfect, according to their mother. Anthony was an exceptionally bright student at university, while Patience had already produced three children, much to Mrs. Metcalf’s pride and Mrs. Braithwaite’s infuriation; why did Betty have to be so bookish?

Patience glanced sideways toward the other ladies and added, “And with the end of your marriage, we wondered if there was a more reputable leader—”

“So that’s what this is about!” Mrs. Braithwaite roared. “Am I an embarrassment to you all because I’m divorced?”

A sharp intake of breath echoed around the hall. Divorce was rare in these parts. It was a word that quickly conjured up ideas of carelessness, loss of control, depravity.

Mrs. Metcalf raised a condescending eyebrow. “Now, let’s not get beyond ourselves. It’s not only to do with that. It’s also because of the events on Saturday evening.”

Mrs. Braithwaite felt blood rush to her face. The events alluded to had occurred around dinnertime, when Mrs. Metcalf, in the midst of entertaining Lady Worthing, the ceremonial head of the WVS, had spotted Mrs. Braithwaite’s podgy, pale face in her dining room terrace window. Excusing herself politely, Mrs. Metcalf opened the French doors and looked out into the cool night air. There hadn’t been any sign of Mrs. Braithwaite, only a stubby shadow behind a potted ornamental bush.

“I know you’re there,” Mrs. Metcalf called, and eventually Mrs. Braithwaite had no choice but to come out. It was a mistake to pretend she’d been looking for a lost brooch; they both knew that she was spying. She’d suspected Mrs. Metcalf’s butler of stealing the pig that was missing from a local farm, and she was now waiting in full expectation of seeing a large pork joint—a victorious apple in its mouth—as the centerpiece of Mrs. Metcalf’s table. The food rations had hit Mrs. Braithwaite especially hard, with her love for roast beef, pork, and puddings. When she’d heard about the missing pig, her love of mysteries had got the better of her: she’d become intent on uncovering its whereabouts.

“I was helping the police with an important investigation,” she explained to the committee, adopting the self-righteous air of one doing a service for the community.

“You were trespassing on private property.” Mrs. Metcalf sniffed victoriously.

“But the pig is not a WVS matter. You can hardly expect me to stand down under such circumstances.”

“You will have to let the committee decide that,” Mrs. Metcalf said. “Until then this meeting is adjourned.”

The ladies stood, discussing the matter between themselves, while Mrs. Metcalf came forward to have a quiet word with Mrs. Braithwaite.

“I would also like to remind you that I know about that little matter you’ve kept hidden all these years.” Mrs. Metcalf gave the smug smile of one who knows a secret and acknowledges its power. “I think your daughter, Betty, would be very keen to hear what you’ve been keeping from her.”

Mrs. Braithwaite expelled a great snort of breath. She loathed the fact that Mrs. Metcalf knew the one thing she dreaded leaking out. Goodness knows what effect it would have on her reputation, not to mention how it would affect Betty. Mrs. Braithwaite had tried over the years to forget about it, to sweep it under the rug. But Mrs. Metcalf always reminded her, like a ghoul from the past wagging a condemning finger, always ready to seal her doom.

She noticed Mrs. Metcalf’s son Anthony moving some chairs at the back of the hall, hiding a smirk. He was a slim, ferret-like young man who was a little older than Betty; they’d been great friends, getting the bus to the grammar school in town every day. Occasionally he would visit from university, and yesterday, annoyingly, had been one of those days.

Had Mrs. Metcalf already told him her secret? Would he tell Betty?

Furious, Mrs. Braithwaite snapped, “You can’t get away with this! You’ve been after the top position for months, and now you’re forcing me out—”

“Not forcing you out, exactly” Mrs. Metcalf interrupted. “You are still welcome to help out with the other village ladies.”

Mrs. Braithwaite contained a howling bellow, the sound sticking in her throat like an unerupted missile. The WVS was all she’d had since Dickie left. Without her ladies to lead, she would have no one. But it would be impossible for her to attend the group as a normal volunteer, not the group leader. She had noble blood in her veins, after all, even if she lived in a small house these days. She could never lower herself.

Regaining her composure, she brought herself up to attention. “If you don’t want me here, I’ll find other people who will appreciate my energies.”

With that she threw Mrs. Metcalf a final look of disdain and stormed out, her proud exit sabotaged by a pile of folding chairs nlying against the door, which clattered to the floor, pulling Mrs. Braithwaite down with them. After sprawling around like an upended beetle, she scrambled to her feet, straightened herself, and marched through the door with as much dignity as she could muster. Mrs. Braithwaite remained in her sitting room for the rest of the day. As the setting sun cast a golden glow onto her chintz sofa, she realized that drastic measures were needed. With her husband gone, her village peers tossing her aside, and Mrs. Metcalf threatening to expose her secret, there was nothing else for it. She had to go and see the person who still mattered in all of this.

She needed to see Betty.

She needed to tell her everything.

Otherwise, every time Mrs. Metcalf needed more power, she would remind Mrs. Braithwaite about what she knew; that she could drop it over the small community like her very own incendiary bomb. She couldn’t let Betty hear about it from Mrs. Metcalf or Anthony.

Betty, who was now almost twenty-one, had sent her five letters since she’d been in London, and as she sat in the train to London, Mrs. Braithwaite pulled them out of her sturdy brown handbag and flicked through them. The first was short, letting her mother know she was living in a boarding house in Bloomsbury. The next had a new address: Three Shilling Lane, Wandsworth, sharing a house with two girls. The other letters were also concise, telling her about lunchtime concerts with girlfriends, a play she’d seen at the theater—“a murder mystery, you’d have loved it, Mum!”—and a marvelous new film, Gone with the Wind. She seemed to be incredibly busy, enjoying her job, and keeping herself safe from the bombs.