A Manhattan couple hosting an open house to sell their apartment experience even more stress, chaos, and confusion when they also have to rush their beloved dachshund to the vet in the middle of what may be a terrorist attack. 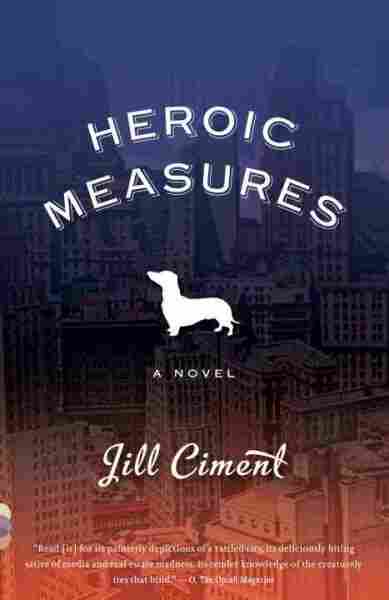 it is the hour when the light over the sink, a fluorescent meant for washing dishes, suddenly usurps the fire of the dying sun and the kitchen window becomes a mirror, the moment every evening when Ruth realizes that her resolves are made of straw and Alex senses his age as a transitory chill.

Their sun-flooded, eat-in kitchen is prominently featured in the open house listing their realtor, Lily, is running in The New York Times tomorrow. When Lily first appraised their co-op, a five-flight walk-up in the East Village and suggested the asking price of nine hundred and ninety-nine thousand, Ruth felt the number bite her, like a needle, and enter her, like an intoxicating drug. As a child of the Depression, the word millionaire still held a magical spell, Fred Astaire dancing in top hat and tails. But the instant they signed Lily’s contract, the headiness vanished. What were they doing selling their home of forty-five years? She didn’t want to leave the city. They never cared about money before. Where would they go? She and Alex, never mind Dorothy, would be lost anywhere but New York.

Ruth looks across the kitchen table at Alex, seventy-eight years old, his white hair thick as a pelt, his white brows and beard stiff as wire, and envisions him mounting the five flights of stairs, the ample cavities of his eyes alive with determination, taking two steps at a time, his weekly test to prove to himself that he can still do it. But how long can he (or she for that matter) keep it up? With nine hundred and ninety-nine thousand, surely they can afford an elevator apartment somewhere in Manhattan.

When Alex first heard the asking price, he, too, felt weakened by the pull of the number’s magnetism. His father, an immigrant shoe salesman, idolized millionaires as he had once revered rabbis in the old country, as men close to God. Ruth had initially called Lily just to see what their options were when the stairs became too much for them. But how could they turn down one million dollars? How could he? He had nothing to leave Ruth but his paintings, a legacy that often struck him as more of a burden than an asset. What will she do with all his artwork, fifty years of productivity, the fallout from his compulsion to keep painting no matter what? If she can’t sell the paintings? If she can’t sell the apartment when the time comes? She’ll end up entombed in his work.

As preoccupied as they are with tomorrow’s open house—Ruth has barely touched her chicken dinner, Alex has eaten most of his, but without pleasure or awareness—they still remember to set aside a few choice pieces for Dorothy.

From the doorway, Dorothy watches Ruth pick up Alex’s plate, scrape his contribution into a bowl, add some morsels of her own, and then set the bowl on the tiled floor between their chairs. At twelve, eating is Dorothy’s last great pleasure. Her dachshund face, mostly snout, is now completely white, whiter even than Alex’s. She is missing two canines and three back molars. At her withers she stands eight inches tall, weighs ten pounds, two ounces. She tries to get up, but nothing happens. Her hind legs have turned to ice, burning ice. Without even knowing that she’s doing it, she relieves herself on the tiles. She only knows that she has done so because of the odor; it smells sour and sick. She lets loose a shrill yelp.

Ruth looks in her direction, blinks for a moment or two, as if Dorothy had roused her from a trance. “Dorothy, have you wet yourself?” she asks, crossing the kitchen and bending over her.

Dorothy searches Ruth’s eyes—mapped in wrinkles, putty-gray and magnified to omnipotence by thick glasses—for instructions. Should she stay put, or try to stand up again? What does Ruth think? If something truly bad had happened to her back half, wouldn’t she see it in Ruth’s stare, smell it on Ruth’s skin? Ruth reeks of fear.

Alex joins them on the floor, slips his hand under her belly, another under her chest. “I’m not going to hurt you,” he says, gently lifting her out of her mess. When he sets her down on all fours, she sinks backward again, as if her ice legs had already melted in the fire. She shrieks.

“I’m trying to find out what’s wrong. She may have something stuck in her paw.” Leaning closer, Alex examines her back feet. All she can feel, though, is smoldering numbness. “Walk away, Ruth. Pretend you’re leaving. Open the door and call her.”

“You think it’s something in her paw? Dot can be such a little Sarah Bernhardt when she wants to be.” Ruth unlocks the front door, holds up Dorothy’s leash and collar, and waves them enthusiastically. “You want to go for a walk? Come on, Dottie, we’ll go to the falafel stand.”

Dorothy hears her tags rattling for her, but all she can manage is to scoot herself forward, an inch at a time.

“I’m calling the vet,” Ruth says. Still holding the leash and collar, she hurries back into the kitchen. Dorothy fears she’s coming back to yoke her to that lead, but Ruth steps over her and reaches for the phone.

“It’s past six, no one will be there,” Alex says. “Let’s just go straight to the animal hospital.”

Ruth puts down the phone.

“It may be nothing. Remember last year? Dot acted as if she was dying. Seven hundred dollars later we found out she had gas.”

“Should we wait to see if she’s better in the morning?” Ruth asks.

“I don’t think we should wait.”

“Is it safe to move her? Should I get her pillow?”

Alex looks around the kitchen and picks up the cutting board, while Ruth disappears into the bedroom and returns with Dorothy’s tartan blanket and a couple of overcoats. Ruth swaddles Dorothy in the warm wool, while Alex helps her onto the board. Suddenly, whiffs of cheese, cow blood, chicken blood, bacon grease, parsley, peanut butter, and garlic permeate Dorothy’s nostrils, but for once the smells bring her no pleasure.

Slipping their fingers under the board, Alex and Ruth lift her into the air and ferry her out the front door down the hallway. At the precipice of the staircase, Dorothy begins to shake. Even under the best of circumstances, riding safely in Ruth’s big purse or securely buttoned in Alex’s overcoat, she fears the yawning, spiraling stairwell.

“How are we ever going to do this? I hate these stairs,” Ruth says.

“You hold her, I’ll hold the board under her,” Alex says.

Ruth squeezes her with choking compassion, and the three of them start down the steps, Alex first, backward. Dorothy feels her blood swaying within her as Alex struggles to keep the board level. On the first landing, Ruth tightens her grip ever so slightly around Dorothy’s middle, and the pain rages to life again. Dorothy first becomes aware of it as a color: orange. And a shape: sphere. Then the orange sphere explodes and the fire is no longer under her: Dorothy is inside the fire. She now resides in a conflagration so whole and absolute that it is a world unto itself. Nothing from her former existence matters. Her fear of stairs? Flashes away. Her insatiable appetite? Asphyxiates. Even her being caged in a burning body no longer concerns her. All that concerns Dorothy is the little sac of consciousness at the core of the blaze and what she keeps inside that sac: a carbon-hard nugget of trust that Alex and Ruth will know how to help her.