Daisy Fay And The Miracle Man

Daisy Fay And The Miracle Man

A coming-of-age story set on the Gulf Coast follows the adventures and misadventures of Daisy Fay, a straight-shooting girl with an eye for the bizarre, from a lonely eleven-year-old girl to the unlikely winner of the Miss Mississippi contest six years later. By the author of Fried Green Tomatoes at the Whistle Stop Cafe.

NPR stories about Daisy Fay And The Miracle Man 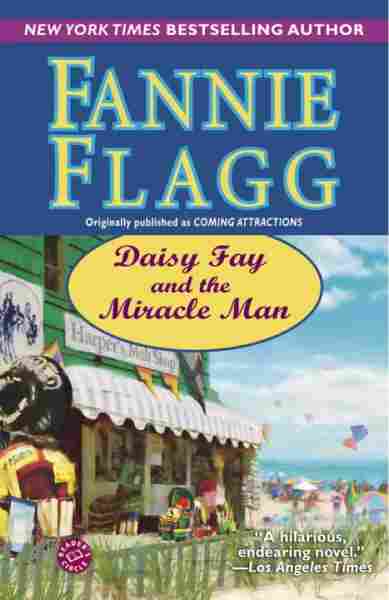 Hello there … my name is Daisy Fay Harper and I was eleven years old yesterday. My Grandmother Pettibone won the jackpot at the VFW bingo game and bought me a typewriter for my birthday. She wants me to practice typing so when I grow up, I can be a secretary, but my cat, Felix, who is pregnant, threw up on it and ruined it, which is OK with me. I don’t know what is the matter with Grandma. I have told her a hundred times I want to be a tree surgeon or a blacksmith.

I got a Red Ryder BB gun from Daddy and some Jantzen mix-and-match outfits Momma bought me at the Smart and Sassy Shop. Ugh! Grandma Harper sent me a pair of brown and white saddle shoes—Momma won’t let me wear loafers, she says they will ruin my feet—and a blue cellophane windmill on a stick I am way too old for.

Momma took me downtown to see a movie called His Kind of Woman with Robert Mitchum and Jane Russell, billed as the hottest pair on the screen. I wanted to see Pals of the Golden West with Roy Rogers and Dale Evans, where Roy patrols the border for cattle-smuggling bandits. But Momma is mad at Daddy for giving me a BB gun so I didn’t push it. I’m not doing much except sitting around waiting for the sixth grade. My friend Peggy Box who is thirteen won’t play with me anymore. All she wants to do is listen to Johnnie Ray sing “The Little White Cloud That Cried.”

I am an only child. Momma didn’t even know she was going to have a baby. Daddy was in bed with the flu, and when the doctor came to see Daddy, Momma said all of a sudden a big lump came up on her right side. She said, “Doctor look at this!” He told Daddy to get out of bed and for Momma to get in it. He said that lump was a baby, maybe even twins. Boy, was Momma surprised. But it wasn’t twins, it was only me. Momma was in labor for a long time and Daddy got mad about it and choked the doctor. When I was being born, I kicked Momma so hard that now she can’t have any more children. I don’t remember kicking her at all. It wasn’t my fault I was so fat and if Daddy hadn’t choked the doctor and made him nervous, I would have been born better. Whenever she tells anybody the story about having me, her labor gets longer and longer. Daddy says I would have to have been a three-year-old child with hair and teeth and everything, to hear Momma tell it.

I was born in Jackson, Mississippi, and as far as me being a girl it was just fine because my daddy wanted a little girl. He said he knew I’d be a girl and he wrote a poem about me that was published in the newspaper in the Letters to the Editor section before I ever got here.

I’m glad Daddy wanted a girl. Most men want boys. Daddy never wanted any old stinky boy who might grow up to have a big neck and play football. He feels those kind of people are dangerous. Baseball is our game. Jim Piersall is our favorite player. He screams and hollers and causes trouble and has a true understanding of the game.

Daddy says that everybody in history has a twin and that he and Mr. Harry Truman could be equals in history. Daddy and Mr. Truman both wear glasses, have a daughter, and are Democrats. I think that’s why when it looked as though Thomas Dewey would win the election, Daddy jumped in the Pearl River and tried to drown himself. It took four of his friends to pull him out, one a member of the Elks Club.

Momma said he just did it to show off, besides, he had had eighteen Pabst Blue Ribbon beers. Momma says he isn’t anything like Harry Truman at all. Mr. Truman’s little girl is named Margaret. I got stuck with Daisy Fay.… Most people call me little Fay because they call my Mother Big Fay, although I don’t know why, she isn’t all that big. Momma wanted to name me Mignon after her sister, but Daddy pitched a fit and said he didn’t want his only daughter named after a steak. He was making such a commotion, and the woman with the birth certificate was tired of waiting, so Grandma Pettibone settled the whole thing by naming me Daisy, just because there happened to be a vase of daisies in the room. I sure would love to know who sent those rotten daisies anyway. Daddy and I hate that name because it sounds country and we are not country at all. Jackson is a big city and we live in an apartment. I prefer the name Dale or Olive, not after Olive Oyl but after the actress sister of Joan Fontaine, Olive de Havilland.

Momma and Daddy are fighting all the time now. An Army Air Force buddy of Daddy’s named Jimmy Snow called and told him that if he could get $500 Daddy could buy a half interest in a malt shop in Shell Beach, Mississippi, and make a fortune. The malt shop is right on a beach that looks just like Florida.

Jimmy won a half interest in the malt shop in a poker game and needs $500 to get the other half. He’s a crop duster, so Daddy could run the whole thing and he would be a silent partner. Daddy has been crazy trying to get the money. He made Momma mad because he wanted to sell her diamond rings. She said they were not worth $500 and how dare he try and take the rings off her fingers! Besides, she wasn’t going anywhere with him, him drinking so much. So, he invented a practical joke he was sure he could sell for $500. A friend of his has a filling station with an outhouse where he tried out his invention. He put a speaker under the outhouse and connected it to a microphone in the filling station. He made the mistake of trying it out on Momma. He waited until she went in and had time to sit down, then he disguised his voice and said, “Could you move over, lady, we’re working down here!” Momma, who’s very modest and says Daddy has never seen her fully undressed, screamed and ran out the door and cried for five hours. She said it was the most disgusting thing that ever happened to her.

This joke on Momma caused her to leave him and go visit her sister in Virginia to think about a divorce, something she does all the time. I had to go with her. The child always goes with the mother. My aunt has so many children that it made Momma nervous at dinnertime, so we came home.

I hope Daddy gets the money soon. If we move to Shell Beach, I can have a pony and go swimming every day. Daddy is busy working on his new invention. He has an English red worm bed in the backyard and as soon as they grow, he is going to freeze them and sell them all over the country.

A lot of people think Daddy is peculiar, including the members of his immediate family, but not me. His name is William Harper, Jr. Momma says that he got this idea to get out of Jackson when he was in the Army and learned to like Yankees. He still hates hunters, though. Whenever he reads in the paper where one of them shoots another, he laughs and chalks one up for our side. He loves all animals, cats in particular. He swears all dictators hate cats because they can’t dominate them. Hitler would foam at the mouth at the sight of one, and I guess my daddy knows because he fought him in the war.

He was drafted in the Army Air Corps when I was only two years old. He cost them a lot of money because he is so skinny they had to make him special uniforms and special goggles with his own prescription so he could see.

But as Daddy says, “When you’re at war, they’ll take anything.” Daddy didn’t get out of the United States, but he did break his toe when he hit the ground before his parachute opened in Louisiana. The plane had already landed in the swamp when he jumped, so he could have just stayed in the plane, but Daddy lost his glasses and didn’t see it had landed. That’s where he met Jimmy Snow. Jimmy was a pilot and was always yelling bail out over the headset as a joke.