Everyone knows the parlor game question asked of every chef and food personality in countless interviews: What is the last meal you'd want to eat before you die? But what does it look like when you pose the question to bartenders? In Last Call, author Brad Thomas Parsons gathers the intriguing responses from a diverse range of bartenders around the country. 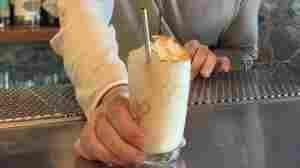 Chad Spangler, co-owner and bartender at Service Bar in Washington, D.C., serves up one of his favorite fall drinks on the menu called The Golden Apple. It's made with homemade Jonah Gold apple juice, apple brandy and a spiced butter syrup. Ari Shapiro/NPR hide caption

'Last Call' Goes Behind The Scenes At Bars, Giving A Glimpse Of Post-Shift Rituals

November 27, 2019 • Last Call, a new book by author Brad Thomas Parsons, examines the rituals behind closing time at dozens of bars around the country. Parsons asks bartenders what their final drink would be.

'Last Call' Goes Behind The Scenes At Bars, Giving A Glimpse Of Post-Shift Rituals 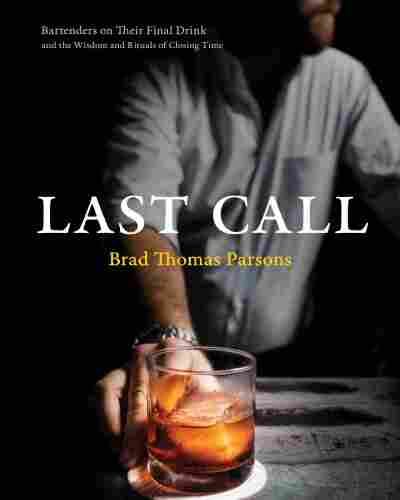 “Goin’ home, goin’ home
By the waterside I will rest my bones
Listen to the river sing sweet songs
To rock my soul.”
—Grateful Dead, “Brokedown Palace”

Among southern bartenders, Gary Crunkleton’s reputation is larger-than-life. In fact, it veers toward American folklore proportions. The North Carolina native opened The Crunkleton in Chapel Hill in 2008, offering an elevated drinking experience that focused on classic cocktails and a deep spirits list that ran counter to the area bars, which mostly catered to the drinking habits of local college students. The first time I had the good fortune of meeting Gary was on a late-summer night at The Crunkleton (which, as a bar name, is impossible to say out loud without smiling). Crunkleton is built like the late Chris Farley, with a head of mussed-up hair and a hint of mischief always brewing just beneath the surface. As we were saying our good-byes, he sized me up and down, grabbed me by the shoulders, and said, “Brad, you and me, we’re a couple of Clydesdales. And Clydesdales have got to stick together.” He’s truly one of the most generous, thoughtful, and downright hilarious souls I know, and I’m honored to call him a great friend.

The thirty-foot-foot bar at The Crunkleton runs the length of the front room and has over six hundred unique bottles on display on ten-foot-high bookshelves that reach toward the ceiling. Crunkleton credits the Grateful Dead for inspiration, modeling the backbar after his favorite band’s legendary Wall of Sound speaker setup that spanned the entire backdrop of the stage during their 1974 tour. Assembling that many bottles in a control state was not an easy feat, and when Crunkleton wanted to expand his collection to offer rare and vintage spirits to his guests, he lobbied the state legislature. In 2015, North Carolina General Assembly House Bill 909 was passed—Crunkleton calls it the “Crunkleton bill”—allowing the “sale of antique spirituous liquor” in North Carolina bars, restaurants, and distilleries. “Owning a bar meant I would need to be there every day to serve guests. I thought it best to create a place full of things that I love in order to sustain my enthusiasm and appreciation for the place,” says Crunkleton. “I’m a big guy. I’m into sports. I look like a good old boy who lives in a trailer park and eats fish sticks, but that’s not who I am. I created a place that’s regal and rich and complex. I created a place about who I am, or who I esteem to be.”

Crunkleton is the first to tell you that he gets easily distracted, and even though I’ve known him for years, it was difficult to pin him down to interview. But his good-natured charm is always on display. “I know you’re a writer, Brad, and I buy a lot of books,” he says. “But I’m going to tell you right now, I’ve only read two books cover to cover in my entire lifetime: The Bible and John Grisham’s A Time to Kill.” We talk on the phone and text each other quite often, but every time I tried to sit down to talk with him during my time in Chapel Hill, we’d last around twenty minutes before he’d get antsy, stand up, and say, “ready for lunch?” or “feel like dinner?” or “let’s go for a drive.” But just spending time riding shotgun in his Suburban as he drove me around the University of North Carolina campus, stopped in for a slice of pizza at his favorite pizzeria, or caught up with our good friend Bill Smith at Crook’s Corner for plates of pimento cheese and hot pepper jelly with crackers, cold fried chicken, and Atlantic beach pie revealed more to me about Crunkleton as a bar owner and father, but, more important, a friend.

Crunkleton started out making good money bartending, but as he was getting older, he wanted to settle down and establish permanent roots in Chapel Hill and meet someone to settle down with. His regular spot to try to meet women was an Italian restaurant on what he calls the “older side” of West Franklin (the undergrads run wild on the other side). “The problem with me is that when I was trying to feel sexy and cool and attractive and all that, there would be people in there eating pasta. So I’d have a glass of wine so I would look cool, but all the while I was thinking, man, that pasta looks good,” says Crunkleton. “So I’d eat a bowl of pasta and feel bloated and full and not sexy and not appealing at all. I’d say to myself, Well, I had a great bowl of pasta but didn’t meet anybody. I’ll try tomorrow night.”

Crunkleton eventually did meet his future wife, Megan, there, and they now have three sons, Montgomery, Hudson, and Beaufort. The running gag in town is that there are four boys at home when you include Gary. But his agonizing pasta travails gave him the idea for what would become The Crunkleton, a bar where adults could enjoy themselves and have great drinks and good conversation, but there would be no food to distract people. “I said, let’s open a bar. It’s the only thing I really know how to do that I’m good at. And I made it happen.” It took about two years for people in Chapel Hill to understand that The Crunkleton was unlike any other bar in town. “We literally had to create a market—to create a culture,” says Crunkleton. “And we did it through cocktails. There are people around here with discerning palates, and we transferred that to what they’re drinking.”

One of his favorite last call stories at The Crunkleton is when he had a bar full of guests who were having so much fun they wouldn’t leave, even chanting, “Hell no, we won’t go,” to make their intentions known. Worried that the local police would drive by and see people at the bar drinking after 2:30 a.m., Crunkleton came up with an idea, jumped out from behind the bar, and started chanting in unison with the rowdy group. “The music I was playing was good for doing a conga line, so I started one and everyone got in line as we danced throughout the bar,” says Crunkleton. After a couple loops around the room, Crunkleton shouted, “Let’s take this outside,” and led the group out onto the street. “After the last person from the conga line was out the door and I had a good angle, I ran back inside the bar and locked the door,” he says. “They were all unhappy being tricked like that, but they understood and laughed about it.”

Despite running a place with over six hundred bottles of spirits, including what Crunkleton calls “some of the best whiskey ever made in America” with bottles dating back to 1906, you’re most likely to find Crunkleton drinking a Miller High Life at the bar. “To me, this simple, inexpensive beer captures what the bar is all about,” he says. “The Crunkleton is a place for everyone who strives to bring out the best in people. A guest can come in here for the first time and be intimidated by all the bottles, the fancy cocktails, the bartenders in bow ties, and the higher costs. The Crunkleton is not a common bar. But a simple bottle of beer can be the drink that shows guests what we are by showing them what we are not: pretentious, assuming, chichi, or jerks.”

He tells me that the obvious problem with considering one’s final drink is that one doesn’t know when that last drink will come. But given that he knows himself pretty well, he tells me his last drink would indeed be a cold bottle of Miller High Life and a glass of rye whiskey, most likely Rittenhouse bonded rye. “I purposely do not pluralize the word drink despite there being two different drinks in front of me. For me, the beer and the whiskey represent one drink in two different vessels,” says Crunkleton.” In a time when cocktails, mixing drinks, and knowing all about spirits are very en vogue, it is comforting for me to find enjoyment, satisfaction, and fulfillment in two simple things.”

Standing by the pool table at the back of the room, Crunkleton seems at ease and takes a moment to look over the bar and soak in the space he created here in Chapel Hill. He brings up “Brokedown Palace,” his favorite Grateful Dead song. “My guess is most people think that song is about dying, but not for me. Why wait to share all of life’s wisdom on one’s deathbed? Share it daily. Live life with meaning. Although the song appears on the surface to be about endings, it’s really about new beginning.” He racks up the balls on the table, picks up a cue, and leans in for the break—but then pauses for one last thought. “I spent many days when I was younger turning drinking into a bad thing. Fortunately, I have found the grace that comes with an occasional drink,” he says. “I hope that my final drink choice says that I am who I am, whatever that means. I try not to be anything more than who I am, and I hope that I am a caring, honest, loving, funny, authentic, and gracious man that relishes in the best life has to offer. For me, the simpleness of a cold bottled beer and a pour of whiskey is an appropriate gift for an honest day’s work of doing good.”