Jake can barely play an instrument, not even a kazoo. And his art? It's better suited for Pictionary than Picasso. Which is a real problem because Jake just faked his way into the Music and Art Academy for the gifted and talented (and Jake is pretty sure he is neither). More jokester than composer, Jake will have to think of something quick before the last laugh is on him.

NPR stories about Jake the Fake Keeps It Real 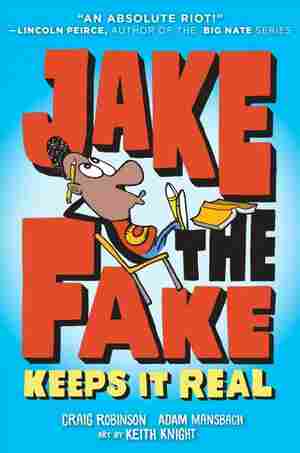 February 21, 2020 • Our kids' books columnist Juanita Giles says she was at her wits' end trying to find a funny (but not mean-funny) book for her son, a budding humorist. Jake the Fake Keeps It Real was just the thing. 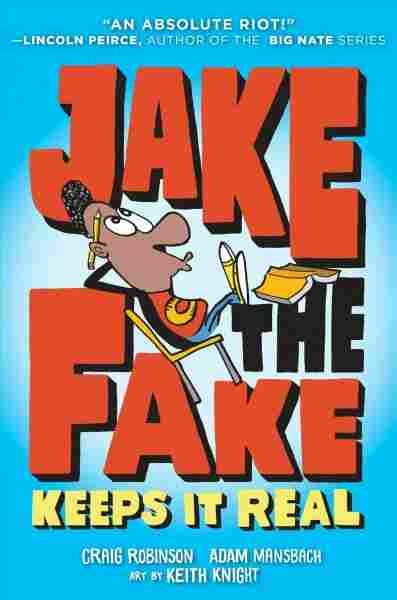 Well, my plan of hoping that summer would never end and school would never start has failed. I probably should have seen that coming.
Tomorrow is my first day of sixth grade, at Music and Art Academy. That’s a big deal. It’s a school for gifted kids: you have to take a test to get in AND do an audition. On your instrument if you’re a music kid, and in your ballet shoes or your clown suit or with your paintings if you’re a dance kid or a clown kid or an art kid or whatever. Though probably there are no clown kids.
Except me. I’m basically the clown kid, because I faked my way in.
My audition was playing “Song for My Father” on the piano.
I’ve played that song seventeen gazillion times, give or take, so I play it really well. More important, my older sister, Lisa, who is a senior at M&AA, told me ahead of time about all the sneaky, tricky stuff the judges were going to do, like make me switch keys in the middle, make me sing along with the song, that kind of thing.
So I aced it, and all the judges clapped at the end, though I’m sure they clap for every kid, even if he just burps the alphabet and walks offstage, or hits himself in the head with a brick.
But here’s the thing. “Song for My Father” is the only song I can really play, not counting baby songs that even a one-handed guy who’s missing two fingers on his one hand could play. That guy’s nickname would be Peace Sign, by the way.
At some point, unless the entire middle school curriculum consists of playing “Song for My Father” over and over, they’re going to realize that I’m not such a great pianist. I don’t read music that well. I can’t really improvise.
Oh, and I kind of hate playing the piano.
Also, on the academic admission test, I sort of checked my answers on the math part against the answers of Syreeta Simmons-Kapurnisky, who sat in front of me in fifth grade and is a math brainiac. And on questions where my answer was different from hers, which was most of them, I kind of changed mine to match up with hers.
Cheating is wrong.
I know that. And normally I’d never do it. But this was the most important test of my life, so I made an exception. I felt bad about it all summer, but I’m pretty sure I’d have felt worse about flunking.
The writing part, I did all on my own. I was the best writer in my class last year. At least I thought I was. Writey “Write On” McWriterson, they called me. Though not really because I just made that up. So maybe I one-third deserved to get into Music and Art Academy. And maybe I have a one-third chance of not getting kicked out.
That kind of math, I can do.
“Song for My Father” really is a song for my father, because if he (and my mom) weren’t so rah-rah about me going to M&AA, none of this would even be happening. Although, really, the person who is most to blame is Lisa.
Lisa is basically a unicorn.
Not in the sense of having a horn in the middle of her forehead, but in the sense of being a rare and unique creature who just flies around the world on silvery wings being adored by mankind, and also she poops glitter.
Obviously that is not true. But in actual real life, Lisa is:
a) a senior
b) who gets straight As
c) and sang the national anthem at Wrigley Field last year
d) and is the editor in chief of the Music and Art Academy student newspaper
e) and, even though this might be weird to say because she is my sister, is really, really, really pretty
f) and changes her whole style of dressing and her hair at least once a week
g) and no matter what she’s wearing, even a jacket of my dad’s that my mom likes to say he stole from a hobo, it always looks as if a team of fashion experts put it together for her
h) and somehow, despite all of this pukeinducing perfection, she is not stuck up at all, but sweet and kind to everybody
i) except me
I wouldn’t say Lisa is mean to me, exactly. Some kids, like my best friend, Evan, have older brothers and sisters who do stuff like hold them down and try to spit into their mouths.
Or hide in their closets and then spring out and scare them into peeing on themselves and film it on their phones and put it up on YouTube.
Lisa mostly just pretends I don’t exist. Or that I do exist, but she can’t for the life of her figure out why, or what I am.
Most of the time she looks at me with a kind of supreme boredom, the way a unicorn might look at an egg salad sandwich.
But since Lisa knows everything about Music and Art Academy, which is probably going to change its name to the Lisa Liston Academy when she graduates, I have been asking her for advice a lot this summer. I figure she’s like a cheat code in a video game. And I need all the help I can get.
The problem is, I can never tell if she’s serious or messing with me. For a unicorn, she has a very good poker face.
Her main advice has been that I have to do everything in my power to get Mr. Allen for homeroom.
Your homeroom teacher is super important in sixth grade, according to Lisa, because you have most of your classes with him. And she swears that Mr. Allen is a total genius and the coolest teacher in the school. Maybe in the universe.