Accessibility links
Virginia's Legislature Will Tackle Gerrymandering In The New Year Earlier this year, Virginia lawmakers took steps toward overhauling the state's redistricting process. But with Democrats now in the majority, will anything change?

4:38
Virginia's Legislature Will Tackle Gerrymandering In The New Year 4:38 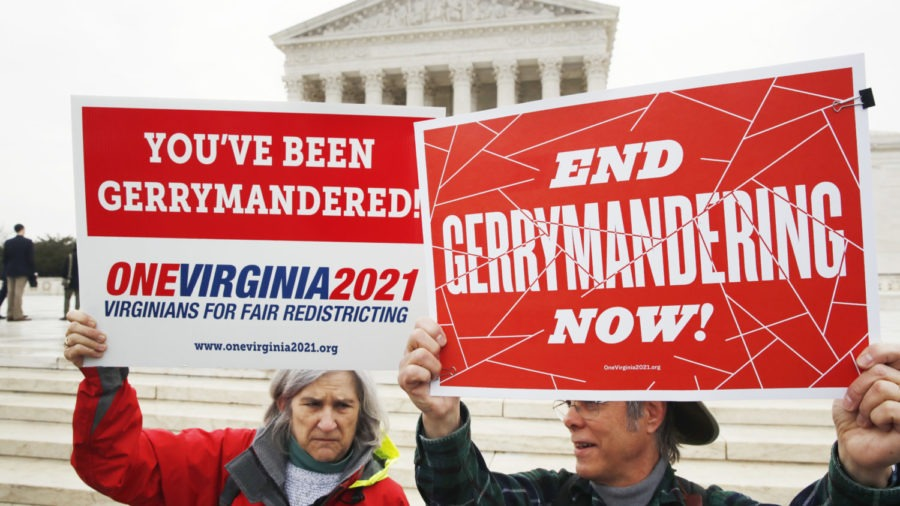 Sara Fitzgerald (left) and Michael Martin (right), both with the group One Virginia, protest gerrymandering in front of the Supreme Court in March. Jacquelyn Martin/AP Photo hide caption

Months after a federal court upheld a new district map because 11 of Virginia's legislative districts had been racially gerrymandered, it's almost time to redraw the Commonwealth's maps again.

Gerrymandering has a long history in Virginia, but the state's political landscape looks a lot different today than it did in 2011. And now, political observers in Virginia wonder whether Democrats will use their newfound power to gerrymander the districts to their benefit.

It's been two weeks since Democrats in Virginia wrested control of the General Assembly for the first time in a quarter-century — a shift in power that gives them the ability to shape the state's legislative agenda for at least two years. That timeframe means the current slate of lawmakers will be in office when it comes time to redraw legislative maps after the 2020 census.

"Now that the election is over, the big question is will the Democrats continue to support redistricting reform," said Stephen Farnsworth, a political scientist at the University of Mary Washington.

Farnsworth added that the "painful reality" for redistricting advocates is that "reform is a lot more appealing to an elected official when they're in the minority than in the majority."

Racial gerrymandering is illegal, but the U.S. Supreme Court in June ruled that federal courts have no authority to review claims of partisan gerrymandering.

Earlier this year, Virginia lawmakers took a major first step toward passing a constitutional amendment that would create a nonpartisan redistricting commission. The 16-member body would have eight citizens and eight legislators, divided evenly by party.

Passing a constitutional amendment in Virginia, however, is a multistep process. First, lawmakers need to pass the identical resolution two years in a row. Word for word. Comma for comma. Then, the amendment goes to voters for approval.

In February, the amendment passed both chambers with bipartisan support. But round two is coming up.

Ken Plum, a longtime delegate from Fairfax County has been proposing bills to overhaul redistricting since the 1980s — and he doesn't want to see Democrats back down now.

"I don't like the idea that we have talked about this bill for so long ... that we would now somehow get cold feet or ... we would somehow walk away from the idea," Plum said Sunday at a forum on redistricting hosted by the League of Women Voters.

Opposition To The Amendment

Some Democrats, however, take issue with the constitutional amendment because they believe it does not go far enough to prevent gerrymandering and protect the black voters who have been disenfranchised historically.

Fifteen delegates voted against the amendment, and almost all were members of the Virginia Legislative Black Caucus.

Marcia Price, secretary for the Black Caucus, was one of them.

She said she does not believe the amendment is "protective of the communities who have been strategically suppressed for 400 years now."

"I didn't think the language was what we need to be adding to our constitution," she added.

Opponents have a few key issues with the amendment: They don't believe there is strong enough language to protect the voting rights of minority communities, and they are concerned that, if the commission becomes deadlocked, the Virginia Supreme Court may step in.

Mark Levine, whose district spans Arlington, Alexandria and Fairfax, said he opposes the amendment because he thinks the state Supreme Court is partisan and fears it will favor Republicans should a decision over the maps reach the high court.

Levine said he believes the decision will inevitably fall to the high court and expressed concerns that such an outcome could create a cycle in which conservative-leaning justices will rule in favor of districts favorable to Republican candidates who will, in turn, elect more conservative justices. (Virginia is one of two states where legislators select high court judges.)

'A Promise That We Made To Virginians'

Others argue that, even if the amendment is not perfect, it's better than the status quo.

And they point to a looming deadline: If lawmakers don't pass the resolution again in 2020, the commission won't be ready in time for the next round of redistricting. So, if lawmakers wanted to change the amendment's text in any way, they would be back at square one.

Supporters said it's possible to address the amendment's shortcoming with something called a criteria bill. This refers to supplemental legislation that would set rules the commission needs to follow when it draws the maps. This could include provisions to keep communities of interest together or to make sure the commission itself has a diverse membership. Legislation could also require the Supreme Court retain a "special master" to draw the maps, if the process reaches the court.

Criteria bills that Democrats support did not pass last year; a Republican-backed bill passed and was vetoed by the governor. Del. Marcus Simon said getting this done should come first in 2020.

"I think it's going to be important to a number of us that we know what the criteria bill looks like ... before we hand over this process to this new commission," he said. "How we draw the districts is as important, if not more important, than who draws the districts."

Simon is not alone in stressing the need to tackle these additional bills with a sense of urgency. Every Democrat who spoke with WAMU had some concerns about the amendment standing on its own.

Still, they believe there are guardrails to ensure the commission ultimately winds up with fair maps that it believes will respect the will of the voters.

Del. Jennifer Carroll Foy said the amendment was a bipartisan compromise, and, "the best we could do at the time." But she wants to move forward and improve on the framework.

"It's a promise that we made to Virginians, and I think we need to uphold that," she said.

With the new year fast approaching, anti-gerrymandering advocates are watching closely. Advocates like Brian Cannon, the executive director of OneVirginia2021.

OneVirginia2021 has spent six years advocating for the nonpartisan commission. Cannon believes the shifting political landscape in Virginia is at least partially responsible for the amendment's success early this year.

At that time, neither party was sure who would be in the majority after November's elections.

Rebecca Green, a professor of election law at the College of William & Mary, also believes the calculus around redistricting reform has changed in the last 10 years.

"I think there's a lot more public attention on redistricting," Green said, "and that's something that legislators will have to contend with this time."

If the constitutional amendment passes again next year, Virginians will see it on their ballot in November 2020.

This story was updated to reflect that criteria bills that Democrats support did not pass last year; a Republican-backed bill passed and was vetoed by the governor. 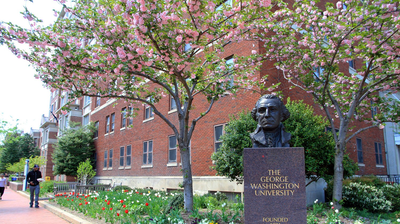 After A GWU Law Student Reported Harassment, It Appeared On Her Disciplinary Record

September 25, 2020 • A law student at George Washington University says a no-contact order she agreed to after being harassed ended up on her disciplinary record, potentially imperiling her legal career. 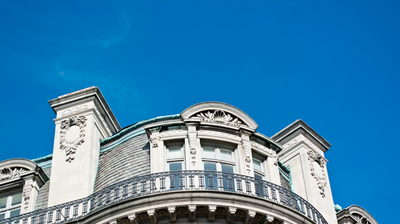 Roughly half of apartment rentals in the city are rent-stabilized. Activists want to expand protections to thousands of more units, in opposition to landlords who say the law is already too tough. Tim Evanson/Flickr hide caption

September 25, 2020 • As the D.C. Council weighs changes to rent control, lawmakers have struggled to strike a balance between the needs of landlords and renters. 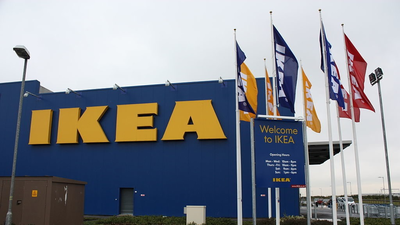 IKEA first offered to pay Maryland back for the unemployment costs of its furloughed workers. Ardfern/Wikimedia Commons hide caption

September 25, 2020 • When IKEA furloughed workers at the start of the pandemic, it cost Maryland over $2 million in unemployment benefits. Then the company offered to "pay it forward." 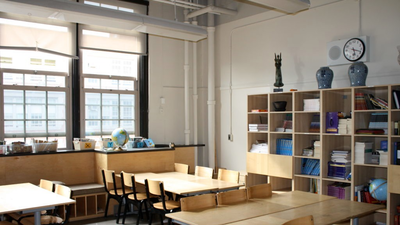 D.C. Public Schools students have been out of class since March 16 because of the coronavirus pandemic. LLLEV/Flickr hide caption

September 25, 2020 • The school system, which enrolled more than 51,000 students last school year, has not officially said if it will start offering in-person learning. 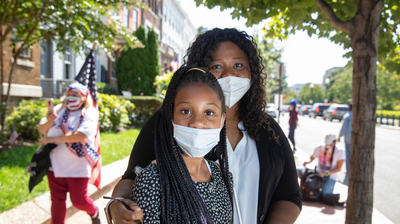 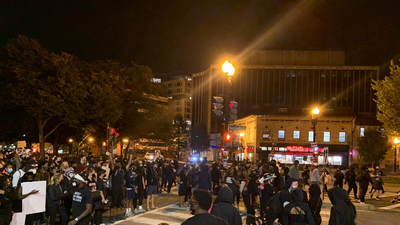 September 24, 2020 • Hundreds of people marched across the District Wednesday after a grand jury did not charge the officers who shot Taylor with murder.