At least 164 Montgomery County residents donated to what they thought was the local fire department. Their money actually went to a political action committee. John Raoux/AP Photo hide caption

Guy Poirier got a call on Aug. 15 asking him for a donation to support the Volunteer Fire Department in Rockville. It seemed like a good cause. There was just one problem: Poirier has been a volunteer with the fire department for 42 years and they "don't do solicitation on the phone at all," he said.

Poirier decided to play along. "I wanted to gather enough intel to report it so that it would stop," he said.

He agreed to donate $40 to the mysterious caller, who then said the organization would send him a letter with more information. Poirier gave the caller the address of the post office box the fire department uses for its actual fundraising.

When the letter arrived, it included a message at the bottom: "Paid for by Heroes United, an independent expenditure-only committee, www.HeroesUnitedPAC.org and not authorized by any candidate or candidate committee."

It was the first he'd heard of the PAC, to which he, along with more than 160 other Montgomery County residents, had now donated.

Poirier and others alerted Eric Friedman, the director of Montgomery County Government's Office of Consumer Protection (OCP), who began a months-long investigation. It ultimately uncovered part of a nationwide scheme that used deceptive telemarketing to solicit donations under the guise of benefiting local volunteer firefighters.

According to the OCP's findings, Heroes United was registered as a political action committee (PAC) with the Federal Elections Commission (FEC) in June of 2017 by Zachary Bass, who served as the PAC's treasurer. 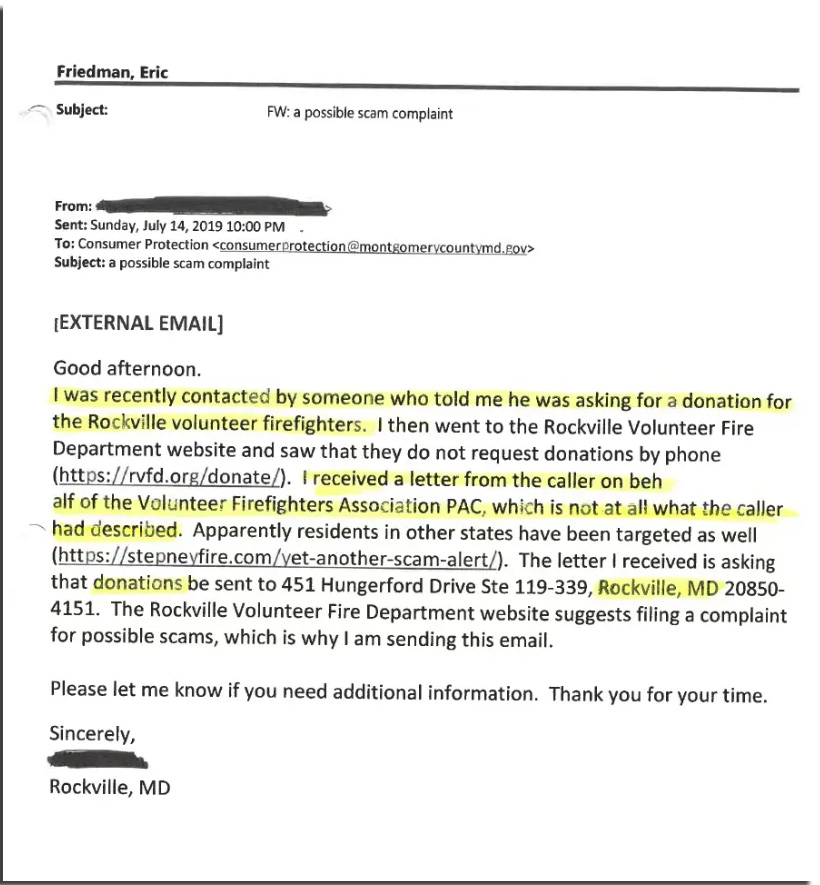 This was the first notification from the community the OCP received, detailing a phone call asking for a donation to the "Rockville volunteer firefighters." Click to read the full complaint.

The PAC was operating across the country using different names, Friedman found. In Montgomery County, it called itself Volunteer Firefighters Association. The PAC reported to the FEC it received $4.6 million during the 2018 election cycle and has collected $1.7 million since.

The investigative process "required gathering one piece of information after another and then tracking that down," Friedman said. He and his team went through FEC filings to try to find vendors paid by Heroes United.

The investigation shows 90% of PAC revenue was paid back to telemarketing vendors to keep the solicitations running. According to Friedman, a New Hampshire-based telemarketer appears to have been arranging calls to residents in Montgomery County. The calls used the local area codes, so residents would think it was a local person calling them. And then the donations could be sent to a mail drop with a local address.

Less than 10% of the revenue was paid to a media firm in Florida for what was reported as "political action," including emails and a 30-second radio spot.

Friedman sent a letter to PAC treasurer Zachary Bass on September 9, putting the PAC on notice that his office had concerns the PAC was violating the consumer protection laws by engaging in "solicitations which may have the capacity, tendency or effect of deceiving and misleading consumers in violation of Chapter 11 of the Montgomery County Code."

Although political committees can spend whatever money is brought in on fundraising, it's illegal to lie to prospective donors about where their money is going.

Bass sent the letter to his attorney in Wisconsin, who worked with Friedman to negotiate a settlement agreement. The settlement, reached in early November, happened in lieu of going to court.

As part of the settlement, Heroes United PAC agreed to stop soliciting county residents and contact those who made "donations" since 2017 to offer full refunds. The PAC also agreed to pay $1,000 to the OCP. Bass and PAC Director Matthew Greenlee signed the agreement.

"It's really despicable because human nature is such that all of us would want to make donations to volunteers that put their life on the line to keep us safe," Friedman said, "and to exploit that natural human tendency is really terrible."

Heroes United PAC did not respond to a request for comment.

Not Just In Washington's Backyard

And in November of 2018, an Arizona man unaffiliated with Heroes United pleaded guilty to using PACs to defraud tens of thousands of donors. He was sentenced to 24 months in jail.

Friedman said using PACs to defraud the public is a new deceptive business model happening nationwide. The Center for Public Integrity reports that the U.S. has seen a significant uptick in the last four years in the number of PACs that raise most of their money from small donations before putting it back into paying for the salaries and administrative costs and raising more cash.

"It used to be that deceptive telemarketers would register to be a charity and then engage in deceptive telemarketing," he explains. "And it appears the people who like to do this kind of scam decided it was a better business model to do it not as an alleged charity, but as a political action committee because it requires less reporting and probably less vetting."

Friedman thinks this is what happened in the case of Heroes United PAC.

"The [PAC] form is very, very simple as far as we could tell," he said. "We've referred to it as smile and file because that's all they do. They check a few boxes, they put in the address as a mail drop, they give you a person's name and lo and behold, now they're a political action committee."

Friedman said the number one rule for consumers is to never trust your caller ID.

"Unfortunately, it's incredibly easy to spoof caller I.D. so that it said any phone number the caller wants it to say or, you know, have any name on there. It could say Montgomery County Sheriff, or it could say consumer protection, it could say anything," he said. "You really can't trust who's on the other end of the telephone."

The same goes for email. "Unless you do some research, you really don't know where the money is going," Friedman said.

Could such skepticism end up hurting donations to charitable causes? Eric N. Bernard, executive director of Montgomery County Volunteer Fire Rescue Association, said he's not worried county residents will be turned off from donating through legitimate means in the wake of the scheme, but he is concerned by the possibility that telemarketers could have implied that donations were required to receive emergency services.

"There has never been a quid pro quo in any fire department career volunteer combination ever, ever, ever," he said. "And we don't want people to have any concerns, especially people with limited incomes," Bernard explains. "There is no requirement for any funds for us to come help you. And any barrier put in the way of that is concerning to us."

Similar attempts to separate people from their money will continue. Friedman cautions it's hard to predict the next scam on the horizon, although he suspects it will involve outreach to consumers by telephone and email. "Scammers are very clever," he said. "Consumer protection agencies and consumers typically have to play catch-up to the latest scam invented."

D.C.'s many restrictions on where people can carry concealed handguns may face legal challenges in the wake of a pro-gun Supreme Court ruling. VCU Capital News Service/Flickr hide caption

June 30, 2022 • D.C. allows people to apply for concealed-carry permits, but restricts where in the city concealed handguns can be carried. Those restrictions could face new legal challenges.

Medical marijuana dispensers in D.C. say they have been losing patients to unregulated gifting shops, prompting moves in the D.C. Council to shore up the medical industry. WILLPOWER STUDIOS/Flickr hide caption

D.C. residents will no longer need a doctor to access medical marijuana

June 29, 2022 • The move to make it easier to get medical marijuana comes in response to complaints that dispensaries have been losing customers to unregulated gifting shops.

June 28, 2022 • The man who climbed the Douglass Memorial Bridge was inspired to protest for abortion rights out of concern for his daughter's future.

Roughly 50,000 people left ballots in drop boxes ahead of the June 21 primary, but almost 30,000 additional mail ballots were dropped off or mailed on Election Day itself. Eric Falquero/WAMU hide caption

June 27, 2022 • Election workers spent part of the weekend counting 30,000 outstanding mail ballots, which did not impact the results of any major races but saw some tightening in the top contests.

June 22, 2022 • Incumbents managed to fend off challengers on primary day, while progressives were able to rise to the top of sometimes crowded fields in open races.