Accessibility links
D.C. Makes It A Crime To Wear Masks. So Why Was A Group Of White Nationalists Able To? Many states have anti-mask laws on the books that were passed in response to the KKK. But some legal experts say enforcing those laws against a new crop of white nationalist groups is tricky. 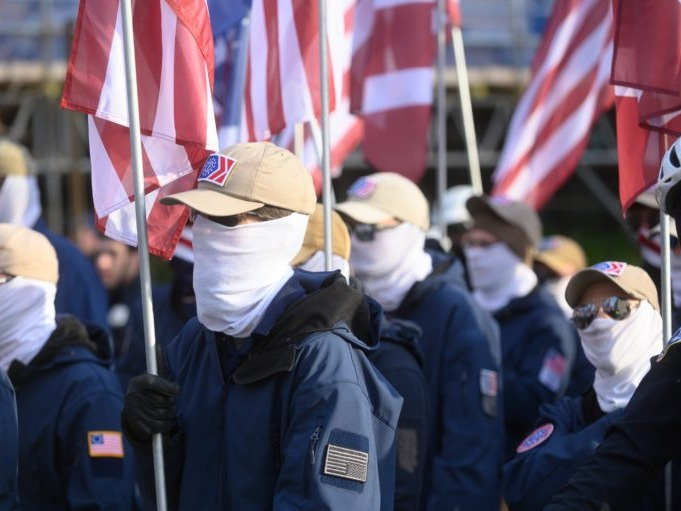 Holding U.S. flags and marching in orderly formation as they shouted "Reclaim America!" the 100 or so white nationalists who demonstrated in D.C. last Saturday wore matching hats, pants, jackets — and white face masks.

And it was that last sartorial choice that attracted attention on social media, where some people asked why the group — Patriot Front, an organization promoting "American Fascism" and deemed a hate group by the Southern Poverty Law Center — was able to get away with what seemed like a violation of D.C. law.

It's currently illegal in the city to wear a mask under a number of circumstances, notably to avoid identification while engaging in illegal activities. But the law, which dates back to 1982, also says mask-wearing is prohibited if the wearer intends to intimidate or threaten another person, or if they try to deprive someone of other rights guaranteed by law. Virginia has a similar law on the books, which was tested last month, when a single person was arrested during a large pro-gun demonstration in Richmond.

Still, there were no arrests at Saturday's white nationalist demonstration, which was escorted by a contingent of D.C. police officers. And that could largely be because many anti-mask laws rest on shaky legal foundations, often testing the careful balancing act between public safety and the First Amendment. Is a mask a means to threaten someone, or simply a tool to protect someone's identity when they have an unpopular opinion?

It isn't an easy question to answer, says Doron Ezickson, vice president for the Mid-Atlantic and Midwest with the Anti-Defamation League.

"The D.C. law hinges on intent, whether the person wearing the hood or mask is intended to cause another person to fear for his or her personal safety. That element of intent is very important from a constitutional standpoint," he says.

When the D.C. Council passed the law almost four decades ago, it did so specifically because of a reported uptick in Ku Klux Klan activity in the Maryland and Virginia suburbs around D.C., and a rise in incidents in the city itself. (The law also criminalized defacing public and private property with racist messages or images.)

"In April of 1982 both the Ohev Shalom Synagogue and the 19th Street Baptist Church were defaced with anti-Semitic graffiti, and during the same month a swastika was painted on Kesher Israel Synagogue," explained a Council report on the bill. "More recently many of the public refuse receptacles in the District of Columbia have been seen with the word 'nigger' painted on them."

But D.C. Council member Mary Cheh (D-Ward 3), who also is a constitutional law professor, says that what the KKK was known for doing differs from the activities of groups like Patriot Front today. While they may spring from the same general ideology, the means of expressing it have so far been different.

"[The KKK] would go to African American homes and businesses and intimidate them. It was a threat of force put out there," she says.

While the legal landscape on anti-mask laws is mixed — some courts have ruled they can be used to stop racists protests, others have said the opposite — there is one Supreme Court ruling that Cheh says roughly lays out the guidelines for when laws can determine someone is being intimidated or threatened.

In the 2003 Virginia v. Black ruling, the court tossed out convictions against three defendants for violating the Virginia law criminalizing cross-burning. Writing for the majority, Justice Sandra Day O'Connor said that while some cross-burnings can be used to personally intimidate or threaten individuals, they can also more generically be used as "a statement of ideology" or "group solidarity." In those cases, cross-burning remains constitutionally protected.

That could broadly apply to mask-wearing, says Art Spitzer, the legal director for the ACLU of D.C. The Patriot Front march may have been offensive, but it wasn't intimidating or threatening in a specific way. "You can't threaten someone by expressing a view in a peaceful way," he says.

Had the group marched to a particular person's house or business the way the KKK used to, that could have run afoul of D.C.'s anti-mask law. But even in those circumstances, it matters less what is being said, and more how it's being said.

"If they just stood there or hold a sign saying 'White people are equal,' that would not be intimidating. If they were chanting some threatening phrase or holding signs with a threatening or intimidating phrase, then that could well cross the line," says Spitzer.

That distinction — protesting in a public place versus protesting at a specific person's home — did serve as the foundation for a law authored by Cheh and passed by the Council in 2010. It largely prohibits masked protests outside personal residences between the hours of 10 p.m. and 7 a.m., with only narrow exceptions if police are given advance notice. The law was inspired by complaints about animal rights activists, some masked, others not, loudly protesting in residential areas.

"The Supreme Court has said that jurisdictions can ban targeted picketing like that," says Cheh. "This was just an additional lever with respect to those particular demonstrations."

Cheh says that, to her knowledge, that new law hasn't yet been tested or challenged. As for the original anti-mask law, D.C. court records show that there have been fewer than three-dozen charges brought for mask-wearing over the last decade. And in many cases, the charge accompanied another criminal offense.

In Virginia, the longstanding anti-mask was amended in 2014 to reference intent, specifically. The changes were prompted by a case which critics said proves how anti-mask laws can go too far: a cyclist was stopped by police on a winter day for riding with a mask, which was technically against the law. The inclusion of intent in the anti-mask law also likely explains why police did not arrest any of the gun-toting and mask-wearing protesters in Richmond last month. (The sole arrest was not apparently linked to the pro-gun groups; the 21-year-old woman arrested faces a court date on Wednesday.)

Cheh says that from what she saw, the masked Patriot Front march didn't rise to that level of personal threats or intimidation, even if the group's members say they do want to "reclaim our nation's capital from Jews, Marxists, and anti-white enemies in government who want to see white Americans erased," as one leader told WUSA 9 reporter Mike Valerio in a written statement. "We seek to build a fascist homeland in the ashes of a failing democracy."

"I had understood that those white nationalists were marching, and even though they were saying awful things, the police were accompanying them. If they were wearing the masks to intimidate people, then the mask laws could apply," she says. "I think the police behaved with appropriate restraint."

Ezickson of the ADL says that balancing free speech rights and hateful speech can be difficult, especially for groups that are the targets of the speech. But he does draw a distinction — for now — between what Patriot Front members were doing in D.C. and what could at some point be illegal.

"It's an ideology of hate and unfortunately some of its members commit violence of ever more substantial impact. The speech is connected to conduct, but we have to understand that constitutionally speech is protected while the conduct is not," he says.

And Spitzer notes that lightly enforcing D.C.'s anti-mask law benefits groups from both sides of the political spectrum. During President Trump's inauguration, he says, many anarchist protesters wore masks. While there were arrests, those were largely for allegations of other offenses, like destroying property. (The prosecutions ultimately fell apart.)

"It's a messy world out there, and sometimes we have to suffer the outrages of people expressing views we detest," says Cheh. 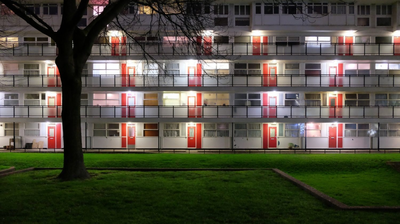 Churchill Gardens is a social housing community in London. Progressives in the D.C. area are calling for similar housing to be built here. Scott Wylie/Flickr hide caption

How European-Style Public Housing Could Help Solve The Affordability Crisis

February 25, 2020 • Government-financed "social housing" is utterly mundane in Europe, but remains a radical concept in the U.S. Could it work in the D.C. area? 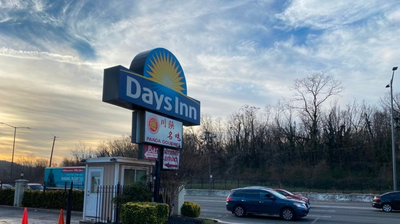 A shuttle service that transports students living in motel shelters on New York Avenue was scheduled to end March 13, prompting calls for the city to keep the shuttle and renewing demands for more reliable transportation for students who are homeless. Debbie Truong/WAMU hide caption

After Outcry, D.C. Extends Shuttle Service That Helps Get Homeless Students To School

February 25, 2020 • The District began offering the shuttle in January to families staying in two motels the city uses as homeless shelters on New York Avenue in Northeast. 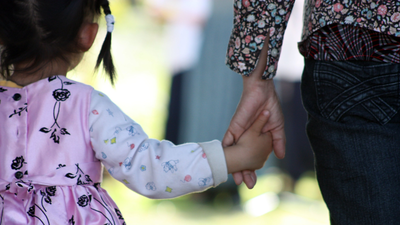 As non-custodial parents owe millions of dollars in missed child support payments, it puts some single parents and their children at risk of poverty. keepingtime_ca/Flickr hide caption

February 25, 2020 • Nationally, among the 6.5 million custodial single parents who were awarded child support in 2015, only 43.5% received all of the child support money that was due. 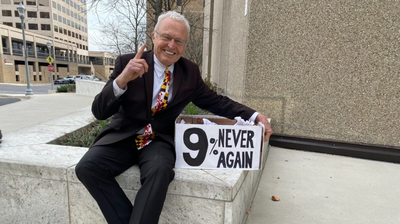 February 25, 2020 • Robin Ficker wants Montgomery County voters to impose an annual limit on property tax increases, so that they can only go up as much as the rate of inflation. 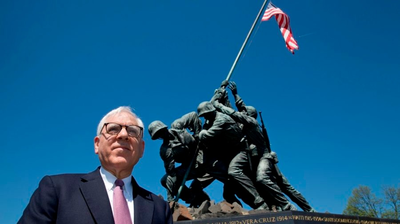 David Rubenstein in front of the U.S. Marine Corps War Memorial on the day he announced his donation to the memorial's restoration on April 29, 2015. AP/Jacquelyn Martin hide caption

February 24, 2020 • The restoration was funded by a $5.3 million gift from businessman and philanthropist David Rubenstein. 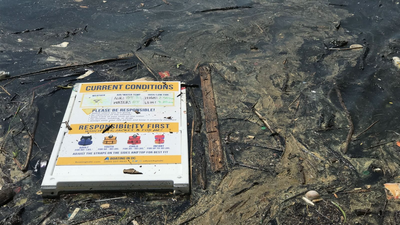 Current conditions: yucky with a chance of rain. The Anacostia River, next to Yards Park. Jacob Fenston/WAMU hide caption

February 24, 2020 • Artificial intelligence will help predict water quality based on current conditions and past data.