Accessibility links
Do Not Plant These! Officials Investigate Mystery Seeds Sent By Mail Hundreds of people in the region have received seeds from China that they didn't order. Now the feds are investigating.

Do Not Plant These! Officials Investigate Mystery Seeds Sent By Mail

Do Not Plant These! Officials Investigate Mystery Seeds Sent By Mail 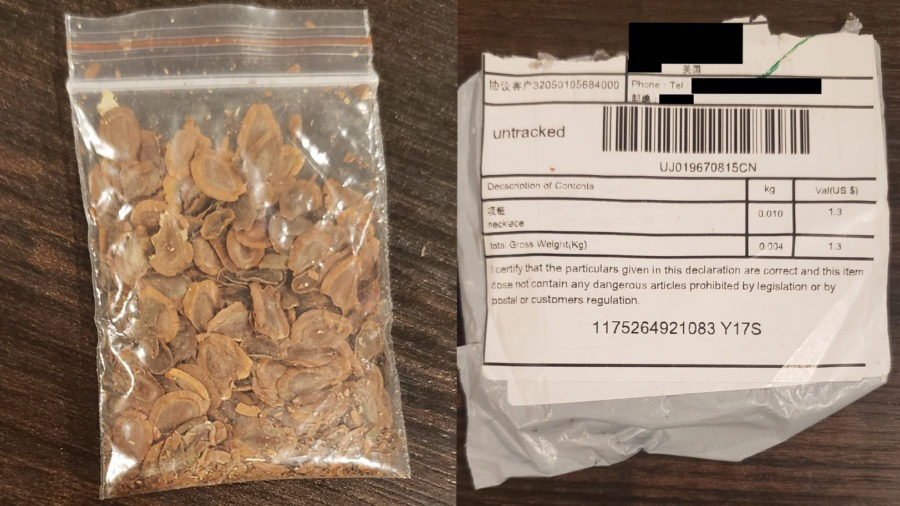 Mystery seeds — do not plant them, if they show up in your mailbox. Courtesy of/Virginia Department of Agriculture and Consumer Services hide caption

Like many people, Allison Parrell has been doing a lot of online shopping since the start of the pandemic. So it wasn't a surprise to see a small bulky envelope in the mail.

"I immediately thought to myself, what is this?" The writing on the package was all Asian characters — except for two words in English: "stud earrings."

"The last stud earrings I ordered were a couple years ago," says Parrell. But she thought maybe it was mislabeled. "Of course I opened it."

Inside was another envelope, filled with seeds: "They were small, unlike any seeds I've seen. I'm a gardener, so I feel like I've seen quite a few seeds." The seeds were blondish in color and teardrop shaped.

Parrell was stumped. She checked her Amazon order history. "I order typically childrens' products and stuff like that," says the mother of three, who lives in Falls Church. "So this was just so off from what I typically order."

Turns out, Parrell was far from the only one. In recent days, officials from more than two dozen states, including Virginia and Maryland, have warned residents about unsolicited seed packages that appear to be coming from China. Now, the U.S. Department of Agriculture and the Department of Homeland Security are investigating the mysterious case of unsolicited seeds.

In Virginia, agriculture officials have received more than 1,000 emails and voicemails from residents reporting receiving unwanted seeds. Michael Wallace, a spokesperson for the department, says residents should not plant the seeds, and should instead keep them and contact state authorities, who are working with the federal agencies during the investigation. "The seeds could be invasive species," says Wallace. "Invasive species wreak havoc on the environment, displace and destroy native plants and insects, and severely damage crops."

In Maryland, a spokesperson for the state agriculture department says officials have heard from close to 100 residents about unsolicited seeds. In D.C., a spokesperson for the Department of Energy and Environment wasn't able to comment on the mysterious seeds before publication, and didn't know if any District residents had reported receiving them.

So why is someone, or multiple someones, apparently in China, mailing seeds to unsuspecting people in the United States? Is it a sinister plot, using the fast-growing tendrils of invasive plants to strangle our democracy?

USDA spokesperson Cecilia Sequeira suggests a slightly less ominous explanation: It could be a "brushing scam," where an online seller sends something unsolicited, then writes glowing reviews purporting to be written by those would-be customers.

According to the Better Business Bureau, brushing scams are used by third-party sellers, often based abroad. First, the seller sends an unsolicited product. "They then post a fake, positive review to improve their products' ratings, which means more sales for them," according to a recent post on the bureau's website, warning of such scams on Amazon. "The payoff is highly profitable from their perspective." 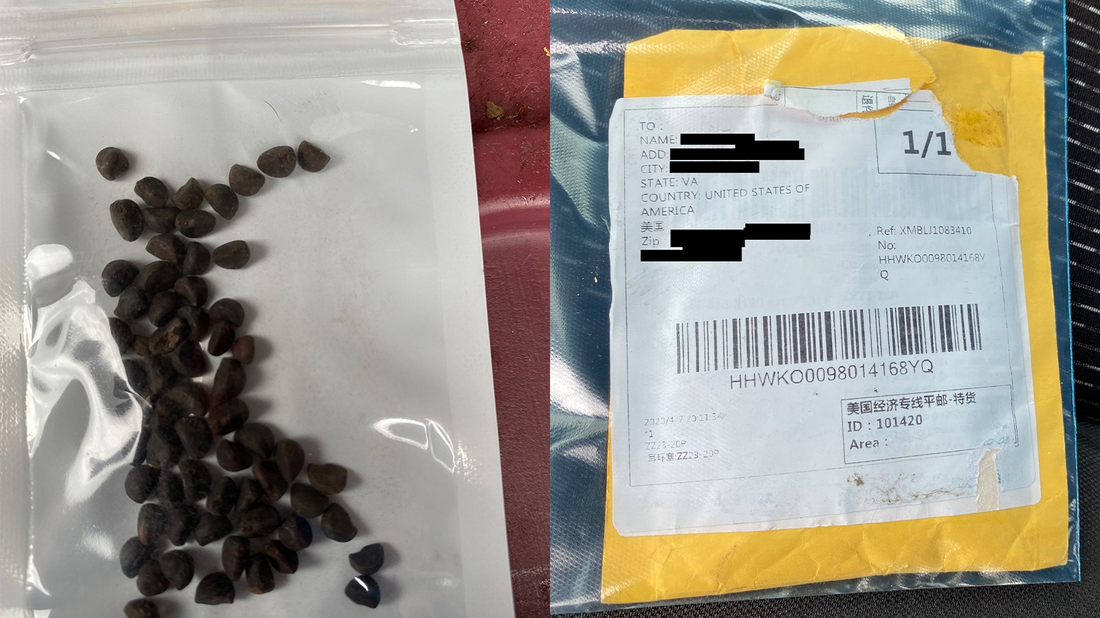 The USDA is collecting seed packages to determine whether they could harm the environment or agriculture.

The seeds people have received have not all been the same — some large and tan, some tiny and black, some sort of like coffee beans.

Allison Parrell says she didn't initially realize the seeds in her mailbox could be, well ... bad seeds. "I hate to say that I actually started to plant them, before I was really thinking deeply about what the seeds were and that they might be something, you know, dangerous."

She planted the seeds in containers — but before they could germinate and begin their potential overthrow of human civilization, Parrell realized what she had done.

"I quickly disposed of all of the dirt and the seeds that were in the containers," she says.

This happened a few weeks ago, before agencies started warning about the problem, and before reporters picked up the story. Parrell didn't think too much of it at the time.

Now, though, that she knows it's happened to many other people, she wonders — did she somehow inadvertently give the unknown plant a foothold here?

"I think I got rid of it, but then it also makes me afraid that, throwing them away, they'll find their way to some dirt somewhere and grow in a landfill or something. I don't know."

How To Report Mystery Seeds

Officials say you should hold on to seeds and keep the packaging, in case it is needed as part of the investigation.

In Virginia: Report unsolicited seeds to the Office of Plant Industry Services, by emailing ReportAPest@vdacs.virginia.gov.

In Maryland: Contact the Maryland Department of Agriculture's Plant Protection and Weed Management program at ppwm.mda@maryland.gov or 410-841-5920.

In D.C.: Get in touch with Matthew Travis, the USDA's state plant health director for the District of Columbia at Matthew.A.Travis@usda.gov or (410) 288-5540.