Accessibility links
D.C. Teen Authors Reflect On Police Brutality, Racial Justice In 2020 Children's Books In a year of protests and social isolation, teen authors are processing the news through their own stories and illustrations. 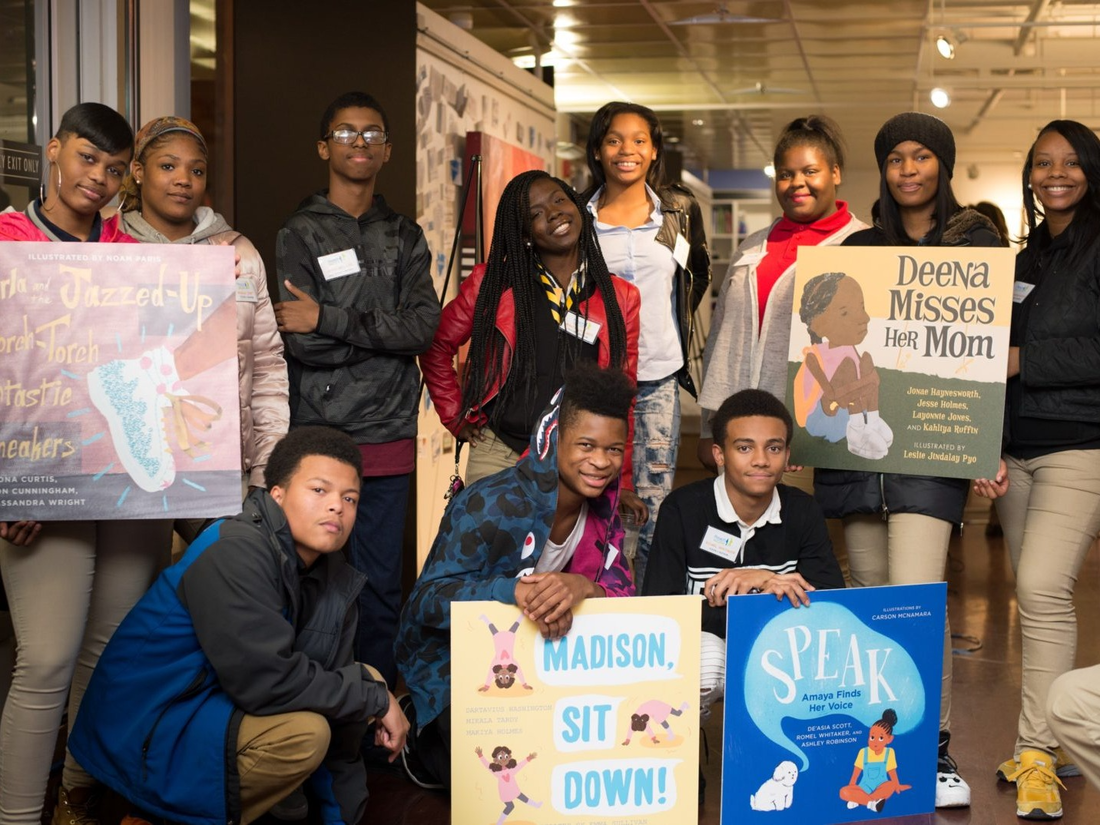 D.C. teenagers from marginalized backgrounds have written children's books that respond to high-profile incidents of police brutality this year, including the killings of George Floyd in Minneapolis and Breonna Taylor in Kentucky.

Since 2013, more than 80 teens have enrolled in a literacy program run by two D.C.-based nonprofits. The nonprofits — publisher Shout Mouse Press and literacy tutoring program Reach Incorporated — partnered that year to help youth with reading and writing. Shout Mouse has published more than 30 books by young authors enrolled in Reach, among them titles like "The Hoodie Hero," which was written in honor of slain Florida teen Trayvon Martin in 2014.

Now, in a year of racial justice protests and social isolation under COVID-19 restrictions, including school closures, the nonprofits aim to provide a "safe and creative space for [youth] to process everything that's happening," says Kathy Crutcher, the founder of Shout Mouse Press.

"Eight-year-olds all over the country were witnessing the horrific murder of George Floyd" in May, Crutcher says. "They were learning about Breonna Taylor ... so we gotta address that."

Reach Incorporated trains high school students of all reading levels to tutor second-graders who struggle with reading. Its program is designed to "promote reading growth for both the tutors and grade-schoolers," says Mark Hecker, who founded Reach in 2009. And because the curriculum is based on children's books, tutors can more easily lead instruction, helping second-graders master sight words, new vocabulary, and overall reading comprehension. Reach tutors have attended Anacostia, Ballou, Calvin Coolidge, Eastern, H.D. Woodson, and other public high schools.

Meeting twice a week for five weeks in the summer, about a dozen Reach teens split into four groups to work with story coaches, a historian, and emerging illustrators. They begin the writing process from scratch, starting with a teen pitching a story idea.

This past summer, some Reach teens created stories related to police brutality, including the killing of Taylor in "Breonna Marches Through Time" and that of Floyd in "And Justice for Who?" Crutcher says the writing and illustration process for these students was more challenging than in previous years, entailing hard conversations about whether to include sensitive language and images.

"'Well, do the eight-year-olds know that word yet?" she recalls as a common question. "Or sometimes the [teen authors] wanted to show more graphically what happened with George Floyd, and we did not want to perpetuate that. We just talked about ways that we could still be touching on truth but not ... retraumatizing [anyone]." 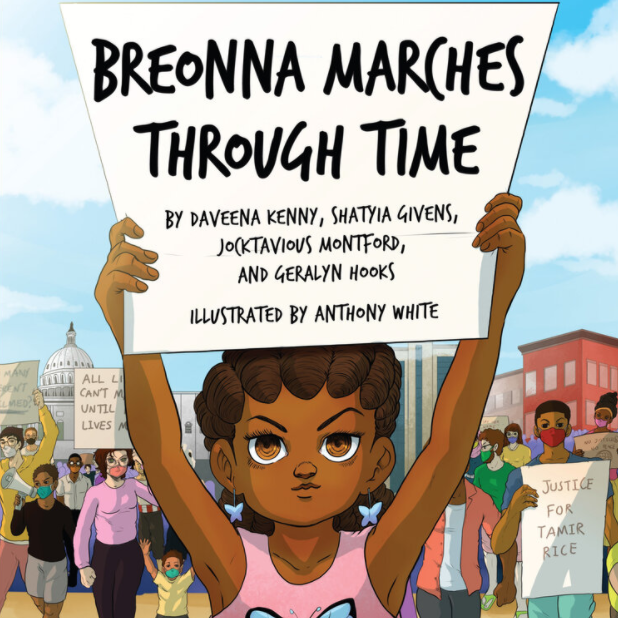 "Breonna Marches Through Time" concerns an 8-year-old time-traveler named Breonna who witnesses her once-vibrant Southeast D.C. community become angered by police violence. She travels back in time to learn about civil rights child activists such as Marilyn Luper Hildreth, who participated in a 1958 sit-in at a drugstore in Oklahoma City, in protest of segregated lunch counters, per the Washington Post. (Hildreth's mother Clara Luper led the sit-in.) 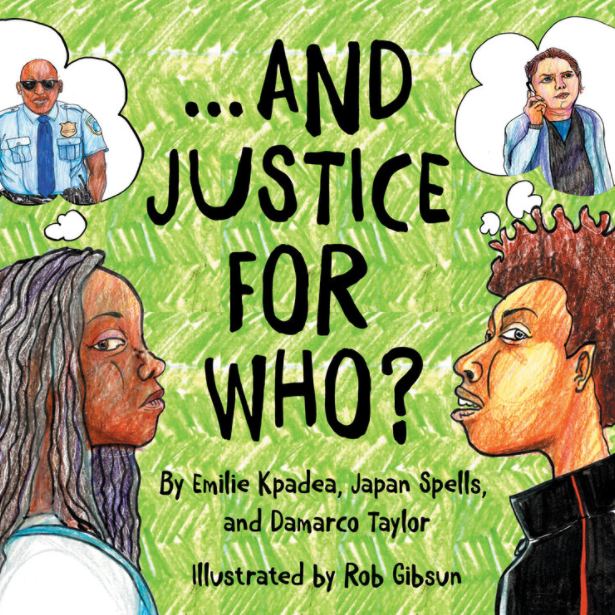 The cover of "And Justice for Who?" The book is about two close friends in conflict about police accountability. One character is defensive about negative characterizations of police as her favorite uncle is an officer, and the other friend is upset by police violence. Courtesy of/Shout Mouse Press hide caption

Fifteen-year-old Emilie Kpadea coauthored "And Justice for Who?", a children's book about two close friends who find themselves in conflict over policing. One of the friends has a favorite uncle who is a police officer, and she is defensive about negative characterizations of police; the other is awakening to and upset by police violence, including Floyd's death, which he sees on social media. Both of the friends begin to think about whether police brutality stems from individual officers or police as a force.

Kpadea says the book is intended to open young children's eyes to the realities of the world.

"It will ... help [the second-graders] to just be safe and understand, not to scare them about the world, but to understand how the world is," she says. "So whenever something like this happens, they won't be surprised."

"I think our teams are sometimes a little surprised by the fact that [a given book] sometimes makes elementary-schoolers pretty emotional, if it touches home," says Hecker. "Our teens have been very willing to sort of step into those conversations sometimes to talk about their own experiences."

Parents occasionally challenge the content of the books, questioning whether the subjects are age-appropriate, Crutcher says. But Shout Mouse and Reach believe their collaboration is partly meant to show kids they aren't alone in their struggles, whatever form they take.

The partnership emerged from a chance occurrence. Seven years ago, a Reach teen-tutor "picked up a book one day and said 'we could write better books than some of these,'" recounts Hecker. "And that was sort of where the idea [of youth authors] came from."

He immediately thought of Crutcher, his college friend who was an experienced publisher. After a successful pilot program with Reach, she decided to found Shout Mouse Press, which is based in Northwest. Ever since, Shout Mouse has partnered with Reach and other nonprofits to help youth write what Crutcher calls "a series of diverse and inclusive children's books, so that all kids can see themselves represented on the page."

The books are published annually at a book release in November. (They can be purchased through Shout Mouse Press, with some titles available at D.C. public libraries.) This year, because of the COVID-19 pandemic, Reach held a virtual release on Zoom.

The pre-recorded event featured Reach alumni who are now in college. They reflected on how the program helped them develop a love of reading and exposed them to leadership and teamwork opportunities while also supporting their college applications. Speakers from the Smithsonian American History Museum, the Atlantic, the Washington Post, and the National Book Foundation narrated book previews as illustrations appeared in the background.

Reach streamed a video of Hecker delivering the new books to their authors, causing reactions of shock and excitement at seeing their names on the covers. Then, Crutcher congratulated the students, saying they "expanded the possibility for everyone about who can be an author."