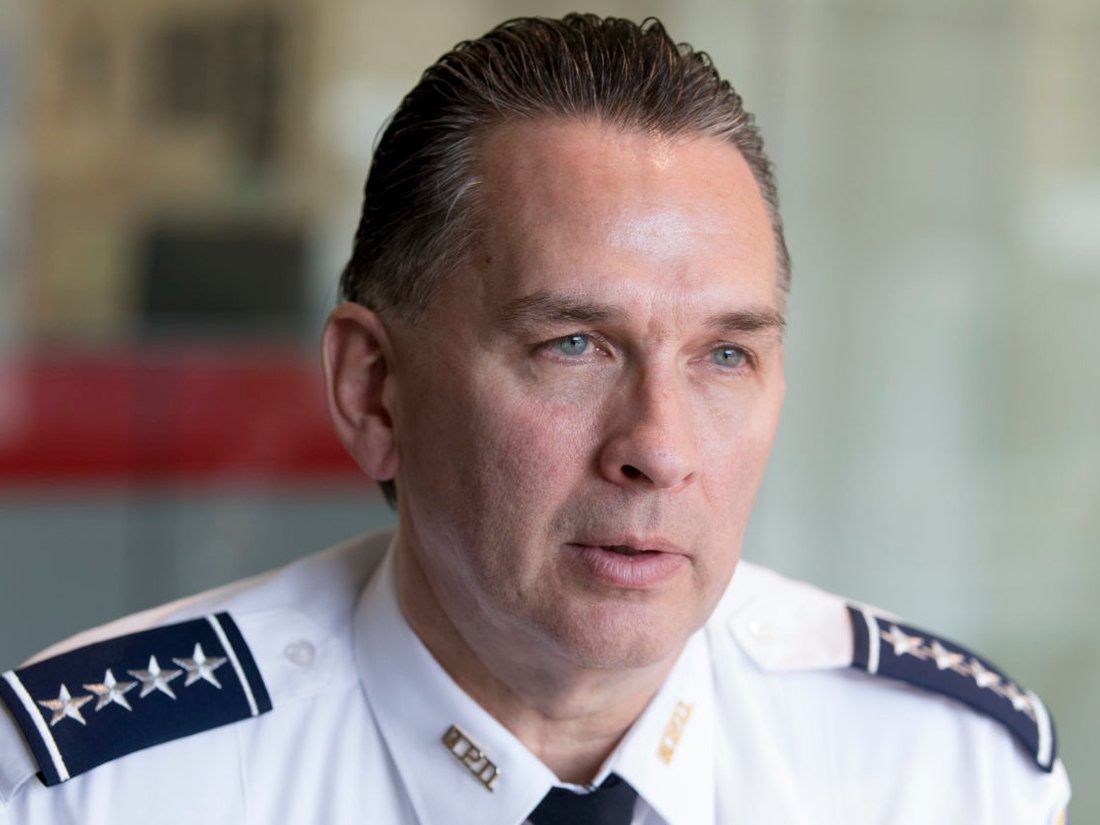 D.C. Police Chief Peter Newsham is stepping down to head the Prince William County Police Department in Northern Virginia after more than three decades on the force.

Newsham will start the new position on February 1, 2021, according to Sherrie Johnson, a spokesperson for the county. He will be replacing former Chief Barry Barnard, who retired this summer.

Ann Wheeler, chair of the Prince William County Board of Supervisors and a Democrat, said Newsham stood out among candidates for his long tenure at MPD.

"His level of experience and his breadth of leadership qualities I think are exemplary," she told DCist/WAMU.

Wheeler said Newsham will move to Prince William, which is located about 30 miles southwest of D.C. and has a population just shy of half a million.

While it is the second most populous county in the commonwealth and growing, many areas remain rural — a far cry from the urban police department where Newsham has spent his entire policing career.

Newsham was nominated for the top job at the Metropolitan Police Department in 2017 and was easily confirmed by the D.C. Council (At-large Councilmember David Grosso was the lone holdout). But he has faced escalating scrutiny in recent years.

Amid a surge of protests in the city following the police killing of George Floyd in Minneapolis, lawmakers voted this summer to require the current police chief to undergo a review every four years to stay on the job. That means Newsham would have been up for review next year.

Asked about Newsham's handling of recent incidents in which officers were involved in the deaths of several Black men, Wheeler said, "I trust that he handled those in D.C. as appropriate and will do the same in Prince William County."

The county said that Newsham emerged as the top candidate after a national recruitment process that fielded 50 applicants from 16 states and D.C.

The announcement, which came late on a Tuesday evening, caught many by surprise, including within the Metropolitan Police Department. A spokesman in MPD's press office told DCist/WAMU the department couldn't immediately confirm the news.

More than an hour after the announcement was made, Bowser issued a brief emailed statement thanking Newsham for his service.

"During his time as Chief, he led the department through a time of great change and challenge for our city and our nation," the mayor said, adding that an interim chief will be announced soon.

Council Chairman Phil Mendelson followed with his own statement. "I am as surprised as everyone else at the news of Police Chief Newsham's decision to leave MPD," he said. "I am sorry to see him leave after roughly three decades – a lot of service to the citizens of the District."

Grosso, who has been among Newsham's fiercest critics, told DCist/WAMU he hadn't been made aware of the news in advance.

"There was no indication for me that he was going to leave D.C.," he said. "You can imagine he doesn't feel too welcome here right now. He's constantly being berated here by people calling for his resignation."

Newsham joined D.C.'s police force in 1989 and became an assistant police chief in 2002. He had been serving as the head of the Investigative Services Bureau when he was tapped to serve as interim chief in the wake of Cathy Lanier's departure in 2016. Six months later, Bowser named him to the role permanently.

In the years since, D.C. has largely seen an uptick in homicides, while a number of other violent crimes have stayed flat or declined.

And while the nation's capital has always been accustomed to demonstrations, Newsham's tenure also saw sustained protests in the wake of Donald Trump's election. The mayor and many other supporters have praised the city's police force as the best trained in the country in terms of handling First Amendment activities. Most big demonstrations in the city end with few, or no, police clashes.

But MPD's response to large-scale protests has also been a recurring criticism throughout Newsham's time on the force.

As an assistant police chief in 2002, he oversaw the arrests of hundreds of anti-globalization demonstrators at Pershing Park. The ensuing lawsuits cost the city millions of dollars in settlements, and led the department to reconsider its policies. (His handling of that incident, along with allegations of domestic violence in the early 2000s, were among the catalysts of a failed "Never Newsham" campaign against his nomination for police chief.)

Fifteen years later, when Newsham was serving as the interim chief of the department, MPD officers kettled and arrested hundreds of protesters during Trump's inauguration. The U.S. Attorney's Office of D.C. charged 230 people with felony rioting after those arrests, but was unable to secure any guilty verdicts. An investigation by the Office of Police Complaints found that officers indiscriminately used nonlethal weapons like pepper spray against protesters who didn't pose an immediate threat, and protesters filed a lawsuit accusing police of violating their constitutional rights.

This summer, criticism of police protest tactics has ratcheted up amid a historic several months of demonstrations against police brutality. Officers have used nonlethal weapons against protesters, including chemical irritants and rubber bullets. In June, MPD kettled dozens of people on a residential street, appearing to launch pepper spray and flash bangs at the group and sending them running for shelter into nearby homes.

The ACLU has also sued MPD for alleged involvement in an incident where protesters were cleared from Lafayette Square, presumably to allow President Trump to appear in photos in front of St. John's Church; MPD has denied involvement.

After a night in August that saw particularly intense clashes, Newsham defended his officers and claimed that much of the violence was caused by people looking to sow chaos. "When you throw bricks and rocks and bottles and urine, and you set fires, there is going to be a police reaction," he said. "So folks who want to suggest or paint the picture that this was somehow peaceful, and the police indiscriminately used munitions against them, they're not being honest."

Two people were also killed this year in encounters with D.C. police officers, stoking further criticism of Newsham and his leadership of the force. In September, an officer shot and killed 18-year-old Deon Kay in Congress Heights, sparking protests for several nights. Federal prosecutors announced last week they would not press charges against Officer Alexander Alvarez in Kay's death.

In October, Karon Hylton-Brown died in a crash with a passenger vehicle while he was being pursued by MPD officers. Hylton-Brown had been riding a Revel moped, looking for his lost keys, friends said. MPD officers are not allowed to chase vehicles over traffic violations, and the department is currently looking into whether the pursuing officers violated policy.

While he has some vocal detractors, Newsham has retained steadfast support from Bowser, who remains broadly popular in D.C.

The D.C. Police Union wished Newsham well following the announcement, writing on Twitter that "his contributions to the MPD will not be soon forgotten."

Other policing experts have told DCist/WAMU that MPD instituted sweeping reforms to improve training and discipline during Newsham's time on the force. He also oversaw the full deployment of body-worn cameras for more than 3,200 officers, and launched an anti-bias training program for officers in conjunction with the National Museum of African American History and Culture.

Over in Prince William County, Newsham will oversee about 700 officers, according to Potomac Local, which notes that a new Racial and Social Justice Commission will spend the next year examining the police department's hiring and use-of-force policies.

Wheeler said she looked forward to Newsham bringing his experience working in a fast-paced environment.

"Prince William County is a diversely rich community and it's cutting edge in many ways and so we're excited to have a police chief bring that level of expertise."

There has also been upheaval at a number of other regional police departments, with the top cops in Prince George's, Fairfax, and Anne Arundel counties all stepping down in recent months.

With Newsham's departure, Bowser will be charged with finding a new police chief. But what has in the past been a predictable and relatively non-controversial process of elevating someone from the department's ranks — Newsham followed after Lanier, herself an MPD veteran — is likely to be challenged by a council that has become more assertive on policing.

While lawmakers did not take a significant step towards defunding MPD during this year's budget cycle, they did pass legislation that enhances accountability in the department, tightens discipline and training, and prohibits officers from using chokeholds during arrests or chemical irritants during peaceful protests. It also created a Police Reform Commission, which is expected to recommend changes to MPD by early next year.

The council will also welcome two new members in January — Christina Henderson in an At-Large seat and Janeese Lewis George in the Ward 4 seat. George, a self-described democratic socialist who has echoed the calls for police funding to be redirected to social services, recently told DCist/WAMU that public safety issues would be a "Day One" priority for her when she takes office.

Grosso, who often stood alone in his criticism of Newsham, said that the new dynamics on the council could well shape who Bowser picks — and how lawmakers respond.

In his statement, Mendelson seemed to agree with at least part of Grosso's sentiment.

"This presents an opportunity to try new approaches to law enforcement and new strategies to fight violent crime," he said. "We're losing a good cop, but sometimes a fresh face can be a good, too."