Accessibility links
Maryland And Purple Line Contractors Settle Lawsuit, Project Moving Forward Both parties sued over $800 million in cost overruns from delays due to other lawsuits and changes to the line's design. 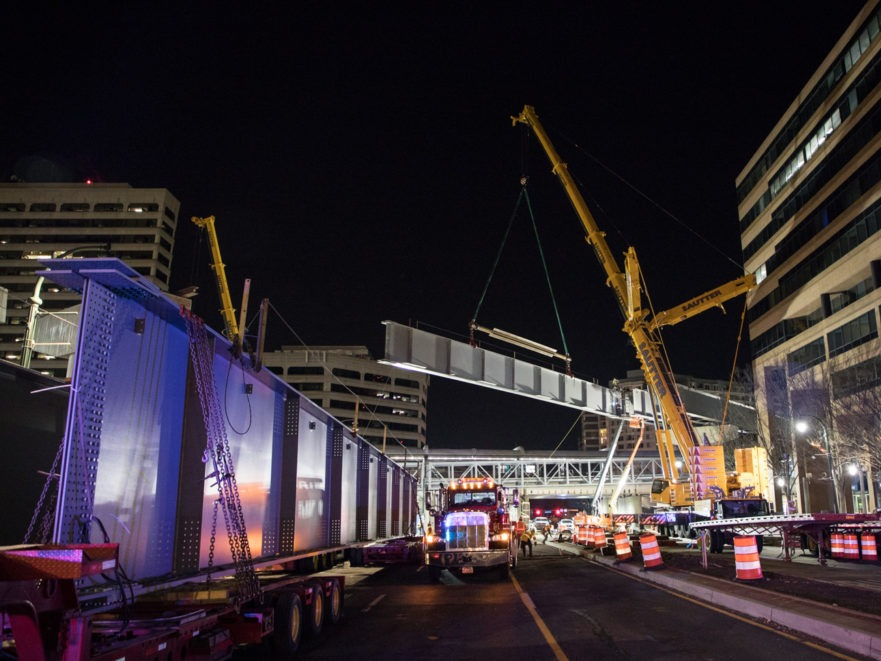 A lawsuit between the state of Maryland and the Purple Line's private contractor partners has been settled out of court, paving the way for a smoother future for the beleaguered light rail line.

In a release Tuesday afternoon, Gov. Larry Hogan announced the state will pay $250 million to settle with the private Purple Line Transit Partners, which is made up of companies Meridiam, Star America and Fluor. It settles "all outstanding financial claims and terminates the current litigation between the parties."

Both parties counter-sued over $800 million in cost overruns that accumulated because of delays due to other lawsuits and changes to the line's design.

Now, the public-private partnership will continue with just Paris-based Meridiam and Star America out of Long Island, New York, as its P3 developers and equity partners. The group will then find an overarching design-built contractor to finish the project, instead of Fluor and other partners.

DCist/WAMU has reached out to PLTP and Fluor for comment on the reason's behind Fluor's departure from the partnership.

The three-person Board of Public Works, made up of Hogan, Comptroller Peter Franchot and Treasurer Nancy Kopp, will vote on the change in December.

"This agreement is a major step toward completing the Purple Line, a transformative project for our state and the region," Hogan said. "I would like to thank [Transportation Secretary] Greg Slater and our partners at Meridiam and Star America for coming together to find a path forward that will lead to a new contractor."

Advocates at Purple Line Now said in a statement that "a negotiated outcome between Maryland and the Purple Line Transit Partners was always the fastest way back on track and we are most thankful."

Maryland previously considered doing the project on its own and managing hundreds of individual contracts. It also thought to seek another P3 partner for the 16-mile line, which would connect the suburbs of Montgomery County to Prince George's County from Bethesda to New Carrollton.

At $5.6 billion, the Purple Line is among the largest public-private partnerships for infrastructure in the country. It was supposed to be completed in 2022. In public-private partnerships, the private company takes on the burden of risks and costs while the state retains ownership. PLTP was responsible for partially financing, plus designing, constructing, operating and maintaining the project.

PLTP indicated it wanted to leave the project in May, leading to months of uncertainty and court hearings.

Work on the light rail project has continued under the watch of the state, including light rail car manufacturing, bridge work, stormwater drainage, paving, utility and pump station construction. That work will continue until a new design-builder is selected.

It's still unclear when the project will be complete. The latest estimates put it at some time in 2024, years behind schedule.

"The months of challenging but always good faith negotiations, led by Secretary Slater, have paved the way for an agreement that will allow the project to move ahead," said Jane Garvey, the chairman of Meridiam North America and the Purple Line Transit Partners Board.

Transportation Secretary Gregory Slater said collaboration is the key in big projects like the Purple Line.

"It takes a good partnership to work together productively on solutions," he said.