Accessibility links
Contact Tracing Was Already Hard. Community Spread Is Making It Worse Contact tracers have struggled for months. Now, they are bracing for a possible unprecedented explosion of cases — and work — during the holiday season. Contact tracers have struggled for months to manage the massive undertaking of effectively tracking and stopping the chain of coronavirus infections in the region. Now they face a new challenge: bracing for a possible explosion of cases during the holiday season with only their existing slate of resources.

As the pandemic has stretched into its ninth month and fatigue with coronavirus-related restrictions has set in, cases in the D.C. region have soared to levels not seen since the spring.

DCist/WAMU reporters spoke with local officials and public health experts throughout the region to review what they are learning about how COVID-19 is spreading through communities, and to understand how effective local contact tracing efforts have been up to this point in the pandemic.

Data overwhelmingly points to locals engaging in small gatherings, working outside of the home and dining out at restaurants before testing positive for COVID-19.

It's impossible to know where exactly locals are contracting the virus, particularly with such significant community spread. The best jurisdictions can do is ask about the activities folks have participated in prior to experiencing symptoms or their diagnosis.

A significant portion of those who speak with tracers are working outside of the home, attending small gatherings and eating at restaurants. That has public health officials worried about a worsening outbreak following holiday gatherings (which the Centers for Disease Control and Prevention and other health experts have advised against strongly).

More still, people are engaging in multiple activities, sometimes in multiple social circles, so it's unclear where they may have gotten sick.

"People usually aren't just going to a family gathering," says Angela Crankfield-Edmond, who has been a leader in Prince George's County's disease investigation work for decades. "They're also doing a variety of different things ... indoor and outdoor dining, personal services and businesses, fitness centers. And it's not very easy to determine exactly what location they may have actually picked the virus up from."

Regionally, the data has shifted a bit since the spring and summer with pandemic fatigue setting in. In D.C., roughly 28% of people said they attended a social event and roughly a quarter ate at a restaurant in the 14 days before either experiencing symptoms or testing positive, according to data from Nov.6 to Nov. 12

Washington City Paper reported in October that D.C. contact tracers are not asking people to identify whether they dined indoors or outdoors, despite scientific evidence pointing to a lower risk of transmission outside. Neither is Arlington County, where 38% reported going to a restaurant before testing positive.

In Arlington, 17% of those contacted said they traveled outside of the region and 12% attended a gathering, such as a funeral, wedding, or party. In Prince George's County, 36% said they went to a small family social gathering, 19% went to a house party, 14% went to an outdoor event, and 14% attended religious services.

More workplaces have reopened throughout the region making that another potential site for transmission. In Prince George's, a whopping 56% reported going into a workplace. About a quarter of D.C.residents went to work outside of the home before testing positive, according to a press briefing last month. In Arlington County, nearly half of the 539 people contacted from Nov. 3 to Nov. 16 reported going into their workplace.

Montgomery County is drilling down even further on the data they collect through contact tracing. Local officials said that for the week of Nov. 1 through Nov. 7, workplaces outside of the home indoor retailers, and restaurants were the top three physical locations that folks had visited. Religious services, family gatherings, and sporting events were the top three gathering types cited by those contacted by tracers.

What's more, the county is working on a methodology that tracks whether transmission happened in a mass setting by learning what people were doing during their incubation period.

Using this framework, county epidemiologists say that they haven't seen any outbreaks associated with restaurant diners (either indoor or outdoor). They have, however, seen outbreaks associated with restaurant employees — particularly in hot, cramped kitchens where it may be hard for workers to distance and be motivated to wear a mask properly, according to Carmen Clarke, an epidemiologist with Montgomery County.

Local health departments are generally able to reach three-quarters of people who test positive within days after their diagnosis.

Montgomery County, in particular, noted that contact tracers are able to get in touch a bit faster, on average 11 hours after someone gets their result, down from 16 in June.

But success in gleaning good information from contact tracing, according to Angela Crankfield-Edmond in Prince George's County, is a lot more than just punching in a phone number. She oversees the county's staff of about 100 contact tracers who are tasked with completing the investigations the state has trouble reaching or that could result in a large-scale outbreak.

"It really, truly takes a lot of patience [to be a contact tracer]," she says. "You really need to be able to relate to the individuals that you're talking to and understand that COVID is just a part of their daily lives."

In Maryland, contact tracers reach 70% of people who test positive for the coronavirus, but only 59% complete an interview.

In D.C., around 75% of people complete a contact tracing interview within three days.

But only 45% of people provide information about their close contacts, according to D.C. Health. That number has fluctuated over the past months, peaking as high as 60% in early October. And the average number of close contacts identified is only 1.2, raising concerns that some are withholding information and that people remain reluctant to provide close contacts outside of their household.

Local health officials hope everyone will answer the phone when contact tracers call — and be open with them. But Clarke, from Montgomery County, knows that isn't always happening.

"I think when people actually find themselves in this position, like everybody sort of thinks they would do the right thing," she says. "And then when the shoe is on their foot ... they sorta don't."

Other local health officials echoed concerns about a reluctance to be upfront with contact tracers.

D.C. Health Director Dr. Laquandra Nesbitt has offered two reasons why people may be reluctant to share their contacts: concerns about their immigration status and stigma around contracting the virus.

"They don't want people to know that they're the potential reason why there could be an outbreak in their small social circle. They're afraid to disclose the list of contacts because they don't have confidence that their name isn't going to be mentioned," Nesbitt said at a press conference in September, "We don't have to name you."

A key metric that D.C. uses is the percent of new cases who were already quarantining when they tested positive. That figure is now roughly 9%, up from a low of 2.6% when D.C. Health began tracking it in July, but is still significantly lower than the city's stated goal of 60%.

This indicates contact tracers cannot draw a line between many of the new cases, and that many people are still going to work, restaurants or small gatherings without knowing they have been exposed.

D.C. remains the only local jurisdiction that reports this metric. 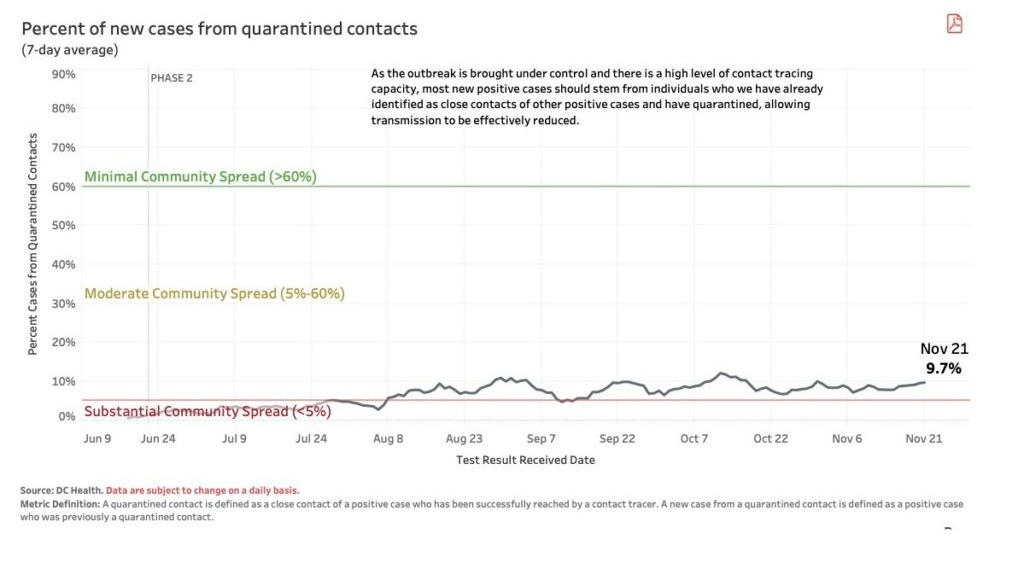 Elena Diskin, a co-lead for the containment unit at the Virginia Department of Health,says about 10% of close contacts end up testing positive themselves within 14 days. If all of those people comply with quarantine, that will help stop infection from rippling out further.

Contact tracing must go hand-in-hand with other mitigation efforts

Uncontrolled community transmission makes a contact tracer's job harder. And public health experts have cautioned that holiday gatherings could lead to an "unprecedented" spike in cases, further hampering that work.

Thanksgiving "is something that we are definitely bracing for," said Angela Crankfield-Edmonds in Prince George's County, "Additional staff would definitely help."

In Virginia, the state's health department is creating regional surge teams of about 12 people each to help local health departments with contact tracing, according to Diskin. Fairfax County, in anticipation of a Thanksgiving surge, has started using texting as an initial mode of contact — a method officials hope will lower the barrier for people to respond to and be more efficient for contact tracers.

But contact tracing alone won't help turn the tide in containing the virus.

"Contact tracing is really great at kind of tightening the faucet to break the chain of transmission," Diskin says. "But really when the floodgates are ... open, as we're seeing nationally," it becomes harder to stop transmission.

If tracing capacity is limited, teams may have to prioritize certain cases, like people who live in congregate settings or work in health care, to "maximize the yield" of their efforts.

Contact tracing has to be part of a larger strategy, Diskin explains. It's critical to "layer in other levels of mitigation," level mask wearing, hand washing and limiting social interactions.

Candice Chen, a professor at George Washington University, agrees. She's part of a team at GW that created a model to estimate the number of contact tracers that states and territories would need to handle their level of outbreak.

The model says that it would take more than 850,000 contact tracers nationally to manage the ballooning number of coronavirus infections. The country had around 53,000 in October, according to NPR. But Chen says health departments shouldn't try to attain those numbers — instead, they should focus on getting the virus to a level that would require fewer contact tracers.

"We don't actually think that the target is 850,000. We think the target is to use your community mitigation strategies to get the numbers back under control," Chen explains.

Still, Chen says it would be wrong to give up on contact tracing.

People identified as close contacts might be more likely to quarantine if a tracer reaches out and informs them of exposure. "Give people the power to make good decisions," Chen says. 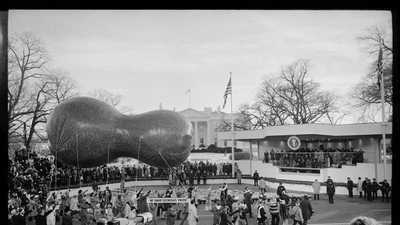 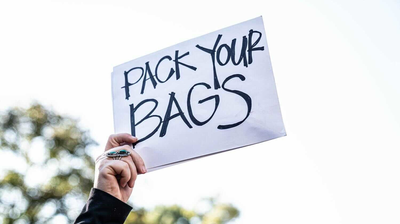 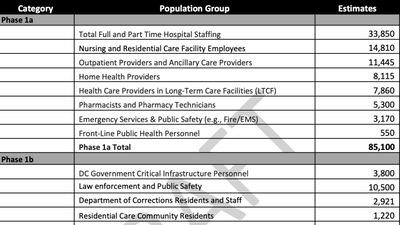 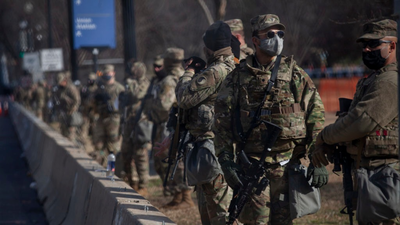 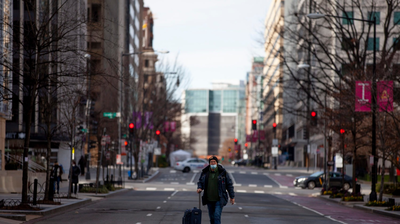 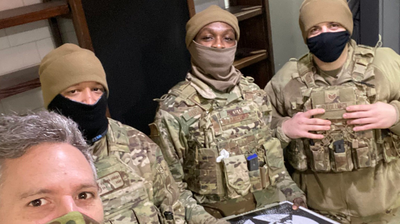