Accessibility links
After A Mob Took Congress, Many Ask: How Did The Police Allow It To Happen? "Social media made it clear as far as to what was going to occur," said D.C. Attorney General Karl Racine. So why couldn't police control the crowd?

After A Mob Took Congress, Many Ask: How Did The Police Allow It To Happen?

After A Mob Took Congress, Many Ask: How Did The Police Allow It To Happen? 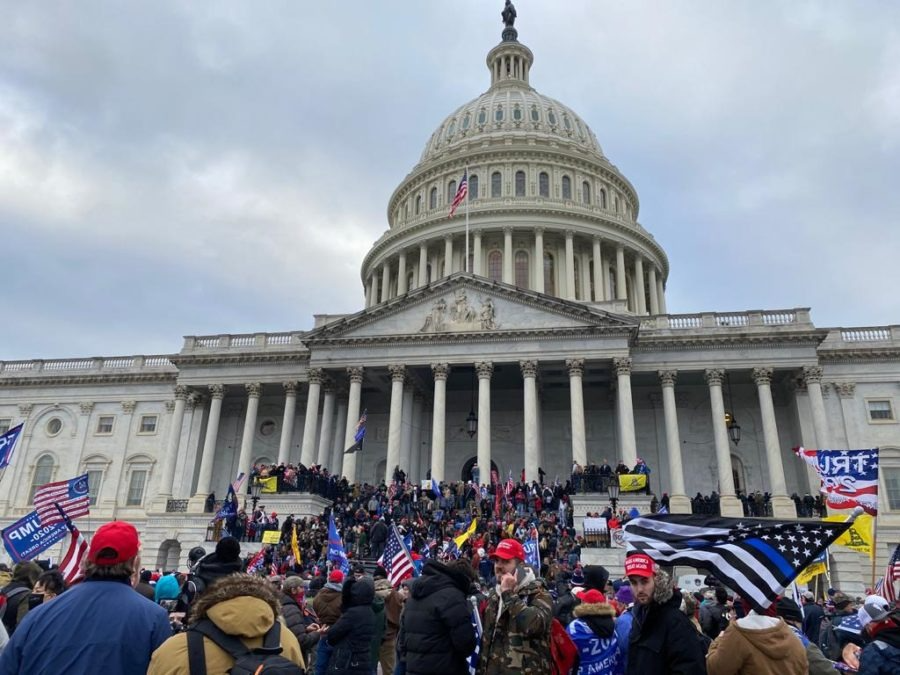 Once hordes of insurrectionists were inside the Capitol itself, there were delays in deploying troops from the D.C. National Guard, which was present in small numbers assisting largely with traffic control. Debbie Truong/WAMU hide caption

As a member of Congress, Rep. Jennifer Wexton (D-Va.) is afforded a workplace befitting American democratic traditions — and one that's secured accordingly, by its own police force with some 2,000 officers.

But much of that security gave way on Wednesday afternoon, when hundreds of pro-Trump insurrectionists pushed their way into the Capitol complex, halting the ongoing count of electoral votes, sending lawmakers into hiding and setting off a chain of events that led to multiple injuries and four deaths.

"It became very obvious in a very short amount of time that they had lost control of the Capitol. And that was one of the scary things for me — to see that they were so woefully unprepared and unable to handle this situation," says Wexton, now in her second term representing a district in Northern Virginia.

As the dust settles on a series of dramatic and virtually unprecedented events, the role of the police in securing the Capitol complex — and their reaction once it was breached — has come under scrutiny. In a city where handling protests and securing government sites are routine duties law enforcement — led by the U.S. Capitol Police — seemed to fail at both on a single day, even with advance notice of the "wild" protests President Trump had called for.

The response to the conservative, mostly white mob was a sharp contrast to the police reaction to protests after the killing of George Floyd in late May and early June—and to other protests organized for progressive causes in the Capitol itself in recent years—where peaceful protesters were arrested in large groups and met by officers armed with military-style vehicles, equipment and weaponry. On Thursday morning, Capitol Police reported that they had made 14 arrests in connection with the insurrection, far fewer than the arrest totals during the heaviest days of racial justice protests in the District this summer.

"I saw how they responded during health care protests, during the Kavanaugh protests. In the past they had the ability to shut it down," says Christina Henderson, an At-Large member of the D.C. Council who until last December worked as a Senate aide — and experienced the Capitol's many layers of security on a daily basis. "This was alarming, the ease that it all fell apart," she says.

The collapse began in the early afternoon as crowds of Trump supporters made their way from the Ellipse, where Trump was repeating false allegations of a stolen election and exhorting his followers to do something about it.

Despite having a jurisdiction that extends far from the building and onto the surrounding grounds, the Capitol Police — which is overseen by Congress — did not appear to set up a strong perimeter outside the Capitol; pro-Trump demonstrators were able to get close to the building before being confronted by police. Multiple videos show crowds pushing their way past lightly guarded barriers and proceeding to the building. Within a short period of time, Capitol Police officers were overwhelmed, eventually calling the Metropolitan Police Department for backup.

Acting MPD Chief Robert Contee said Wednesday that the call for assistance came around 1 p.m., as insurrectionists were trying to breach the Capitol fence. Eventually, police used what appeared to be chemical irritants and flashbangs to clear people from the Capitol steps.

"I think we'll all look back to examine the different plans that were in place, the coordination...U.S. Capitol Police plans, what they were," said Contee. "Certainly, there was an agreement that if there was any assistance needed, that MPD would answer that call. And we did that today."

Capitol Police said they did plan for protests outside the Capitol — but that what they experienced on Wednesday was unprecedented.

"The violent attack on the U.S. Capitol was unlike any I have ever experienced in my 30 years in law enforcement in Washington D.C.," wrote Capitol Police chief Steven Sund in a statement issued Thursday morning. "The USCP had a robust plan established to address anticipated First Amendment activities. But make no mistake — these mass riots were not First Amendment activities; they were criminal riotous behavior." (Others have pointed out that the far-right telegraphed violent plans extensively on social media in advance of Wednesday's events.)

Once the hordes were inside the Capitol itself, there were delays in deploying troops from the D.C. National Guard, which was present in small numbers assisting largely with traffic control. One D.C. official speaking on background said Mayor Muriel Bowser asked the Defense Department for additional troops to help reinforce police at the Capitol, but the request wasn't immediately granted. (Unlike in states, Bowser does not control the D.C. National Guard; the federal government does.)

Speaking alongside Bowser on Wednesday afternoon, Secretary of the Army Ryan McCarthy said part of the delay came because Capitol Police had also requested National Guard assistance, and officials were trying to determine what was needed. "For us to truly understand the request a lot of questions were asked... there was a little bit of confusion," he said.

Before Wednesday, Bowser had specifically requested that federal law enforcement not show up in D.C. in the manner in which it did in June, when police from multiple federal agencies — some of them not wearing badges — descended on D.C. to police racial justice protests over the summer and used violent force on peaceful protesters. At the time, Bowser criticized their presence in the city and requested for them to leave.

By the end of the day, D.C. officials reported that four people had died on Capitol grounds. One woman, who Capitol Police later identified as Ashli Babbitt, was shot and killed by Capitol Police inside the building. Three others died of apparent medical emergencies. On Thursday morning, D.C. officials reported 69 arrests, the majority related to curfew violations or unlawful entry.In early June, during the height of protests against police violence, 289 people were arrested. A significant portion of those arrests were made by MPD after protesters who were out past the city-imposed curfew say they were trapped by police on a residential street in Dupont Circle (Some sheltered overnight in the home of a neighbor who opened his doors to them).

Local officials said they were not only shocked by the failure of Capitol Police to secure Congress, but also but the distinctly different approach law enforcement in general took in responding to supporters of the president, most of whom were white.

"We saw different types of vehicles used," Bowser said in a press conference Wednesday. "We saw a different posture used in some cases. We did not see, for example, deployment of those military personnel on the Capitol grounds."

Ward 4 Councilmember Janeese Lewis George called the response "a complete disgrace" on Twitter, adding, "Over the summer we saw federal law enforcement use tear gas, flash bangs, and rubber bullets on Black Lives Matter protesters without provocation. Where are the riot squads now? Are they standing down as white supremacists attempt a coup?"

Speaking Wednesday night, Contee said it was "not appropriate" to say that D.C. police were showing comparative restraint in arrests with Wednesday's insurrectionists. He said arrests at the Capitol couldn't start until police had gained some semblance of control.

But speaking to the House early on Thursday morning, Rep. Conor Lamb (D-Pa.) had a different take on why arrests were slow to happen. "For the most part they walked in free," he said of Trump's supporters. "A lot of them walked out free. And there wasn't a person watching at home who didn't know what that was: because of the way they look."

Questions continued to circulate Thursday, as a video showing officers apparently moving barriers spread, though it's not clear what prompted the actions seen in the clip.

D.C. Attorney General Karl Racine also called out what he saw as an inexcusable lack of preparedness.

"Social media made it clear as far as to what was going to occur," Racine said in an interview with PBS NewsHour. Trump supporters flooded far-right forums with violent threats in the days leading up to Wednesday.

Racine said the police reaction was a stark contrast to the federal police and military response to protests against police killings of Black people over the summer.

"You saw Capitol policemen running away from individuals who were breaking into the Capitol and defacing the offices of our most respected elected officials," Racine said.

Area residents expressed disbelief at what transpired on Wednesday. Some said they had been reprimanded by police for wearing jeans in the Capitol, others subjected to bomb-sniffing dogs while only running on the Capitol campus. Many pointed out the fatal shooting of Miriam Carey, a 34-year-old Black woman, who was shot and killed by Capitol Police after a car chase in 2013. Gizelle Bryant, who appeared on the "Real Housewives of Potomac," said she was shocked.

"People that don't live in DC don't have a full appreciation of how F-ing difficult it is to actually get anywhere near that building and the fact that these hooligans got inside is UNBELIEVABLE," she tweeted.

Before Capitol Police issued its statement responding to the events late Thursday morning, they did not respond to repeated requests for comment and information from DCist/WAMU and other news outlets.And this lack of public communication also drew notice from some quarters.

"Police chiefs across the U.S. have worked to share info with their communities, to try and build trust," said Julie Parker, a former spokesperson for the Prince George's County Police Department, on Twitter. "After one of our nation's worst days, this silence is shameful."

Moving forward, lawmakers say that investigations into what happened at the Capitol on Wednesday will happen. Rep. Tim Ryan (D-Ohio), who chairs the committee that controls the Capitol Police's funding, told Politico he would start digging into police failures. "You can bet your ass that we're going to get to the bottom of it," he said. On Thursday, he announced a first investigation.

Bowser similarly called for a bipartisan commission to investigate what took place, "both to hold people accountable and to ensure it never happens again." She also said the commission should look at "why the federal law enforcement response was much stronger at the protests over the summer" than at the Capitol.

"I'm sure that there will be lots of post mortems and lots of assessments performed," Wexton said. "But what's clear is that the Capitol Police was unprepared for the gravity of what they faced."