Accessibility links
Illinois Senate To Trump: Show Your Tax Returns Or Be Barred From The 2020 Ballot Democrats try to force Trump's hand by requiring presidential candidates release five years' worth of income taxes to make the state ballot.

Illinois Senate To Trump: Show Your Tax Returns Or Be Barred From The 2020 Ballot

Illinois Senate To Trump: Show Your Tax Returns Or Be Barred From The 2020 Ballot 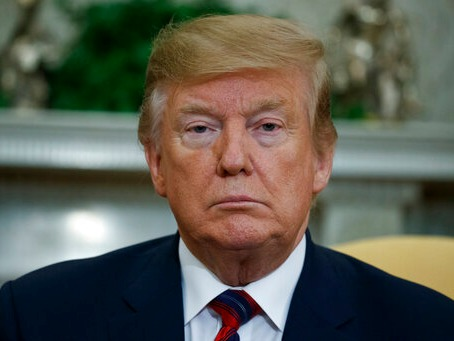 President Donald Trump listens during a meeting in the Oval Office of the White House, Thursday, April 11, 2019, in Washington. Evan Vucci/AP hide caption

The Democratic-led Illinois Senate voted Thursday to compel President Trump to release five years' worth of his personal income tax returns or be barred from appearing on the state's presidential ballot next year.

The state is joining a movement of other Democratic states that aims to force the president to open up his personal finances by releasing his tax returns, something he stubbornly has refused to do and reiterated again this week.

During contentious floor debate in the Illinois statehouse, Trump's name wasn't mentioned once by the legislation's sponsor, state Sen. Tony Munoz, a Chicago Democrat who insisted he merely is trying to shed more transparency on the presidential campaign.

"If you want to run for vice president or president of the United States, hey, what's wrong with providing your tax returns for the past five years?" Munoz asked his colleagues ahead of the Senate's 36-19 vote in favor of his bill.

"If you've got nothing to hide, you shouldn't worry about anything," he continued. "That's how I see it."

Since before Trump was elected in 2016, Democrats have been trying to pressure him to release his tax returns in hopes of illuminating possible business relationships or sources of income from foreign powers, including Russia.

Last week, House Democrats in Washington made a formal demand to the Internal Revenue Service and Treasury Department for access to Trump's taxes, but a congressional deadline to produce the documents passed without action by Trump's administration.

Simultaneously, in New York state, Democrats in Albany have sought to work around the White House's intransigence on the issue by trying to gain access to Trump's state income tax returns.

The move in Illinois Thursday drew complaints from Republicans, who insisted the tax demand in order to qualify for the state ballot was unconstitutional and selectively avoided other officeholders, including the state's newly installed billionaire governor, Democrat JB Pritzker.

"This is quite frankly, with all due respect to the sponsor, an embarrassing waste of the Senate's time," said state Sen. Dale Righter, R-Mattoon, whose home county handed Trump 60 percent of the vote in 2016.

"This is being pushed by a far-leftist organization from the city of Chicago that wants to be able to get up and chirp about the president of the United States," Righter said. "We ought to be better than this."

Righter's reference was to several local affiliates of Indivisible, an anti-Trump organization. The Indivisible groups filed slips of support for Munoz's legislation ahead of Thursday's floor vote.

The measure now moves to the Illinois House, which like the Senate is heavily controlled by Democrats. Pritzker has not taken a public position on the bill.

Similar legislation is in play in 17 other statehouses, according to the National Conference of State Legislatures. 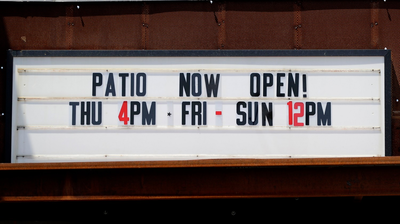 July 13, 2020 • The recent uptick in cases has again thrown the state into the thorny debate over how to contain the virus without sacrificing the economy. 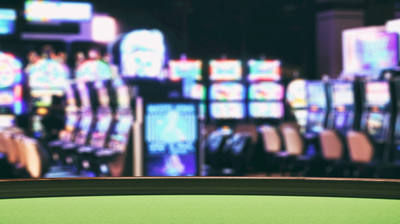 July 13, 2020 • The tax cuts were not supposed to go into effect until there's a new Chicago casino, but lawmakers sped up the process in May. 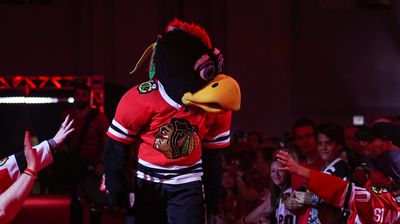 A Chicago Blackhawks mascot throws jerseys toward fans during opening ceremonies at the NHL hockey team's convention in Chicago in 2019. The organization is pushing back on calls for it to change its name and logo. Amr Alfiky/Associated Press hide caption

July 13, 2020 • Reset spoke with Dave Zirin, a leading voice when it comes to sports and equality, about why Native American mascotry is so harmful. 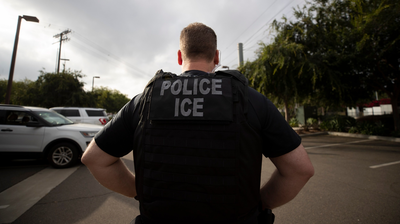 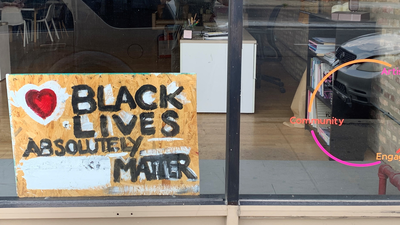 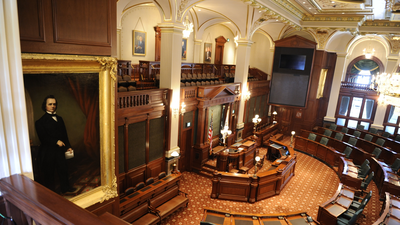