Accessibility links
Chicago Activists Look For New Ways To Oppose Megadevelopments Opposition and resistance are alive and well among activists who oppose two megadevelopments that have been greenlighted by the city. 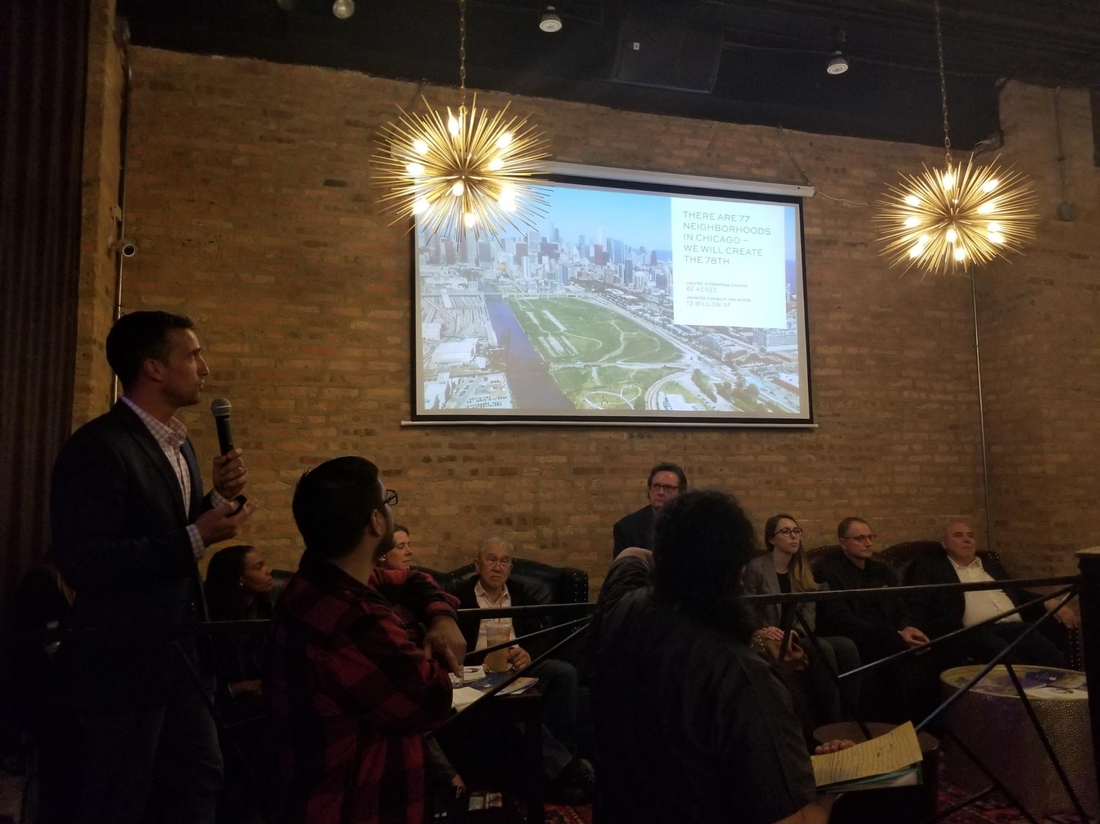 "There are 77 neighborhoods in Chicago — we will create the 78th," boasts one slide in a presentation given by global real estate developer Related Midwest, which is building the new neighborhood. Related is the developer of New York City's massive Hudson Yards project. Linda Lutton/WBEZ hide caption

This week, Sigcho was inside a swanky downtown bar hosting a low-key community meeting about The 78 that included a 30-minute presentation from developer Related Midwest. The proposed new riverfront neighborhood of gleaming apartments, condos, office space and retail sits entirely within Sigcho's ward.

"There has not been a lot of conversation about what The 78 is," Sigcho told the 100 or so people who attended the meeting, many from Pilsen and Chinatown, the heart of the ward. "Residents deserve discussion and deserve information," he said.

There were no protest signs or chants — the bar's TV screens all featured promotions for The 78 — but the new alderman-elect and other opponents of megaprojects Lincoln Yards and The 78 say they're not giving up their fights, they're just shifting fronts.

In many ways, Sigcho has been acting as a de facto alderman, though his inauguration is more than a month away. The ward's actual alderman, Danny Solis, has been missing in action since it was revealed in January he wore a wire at City Hall. 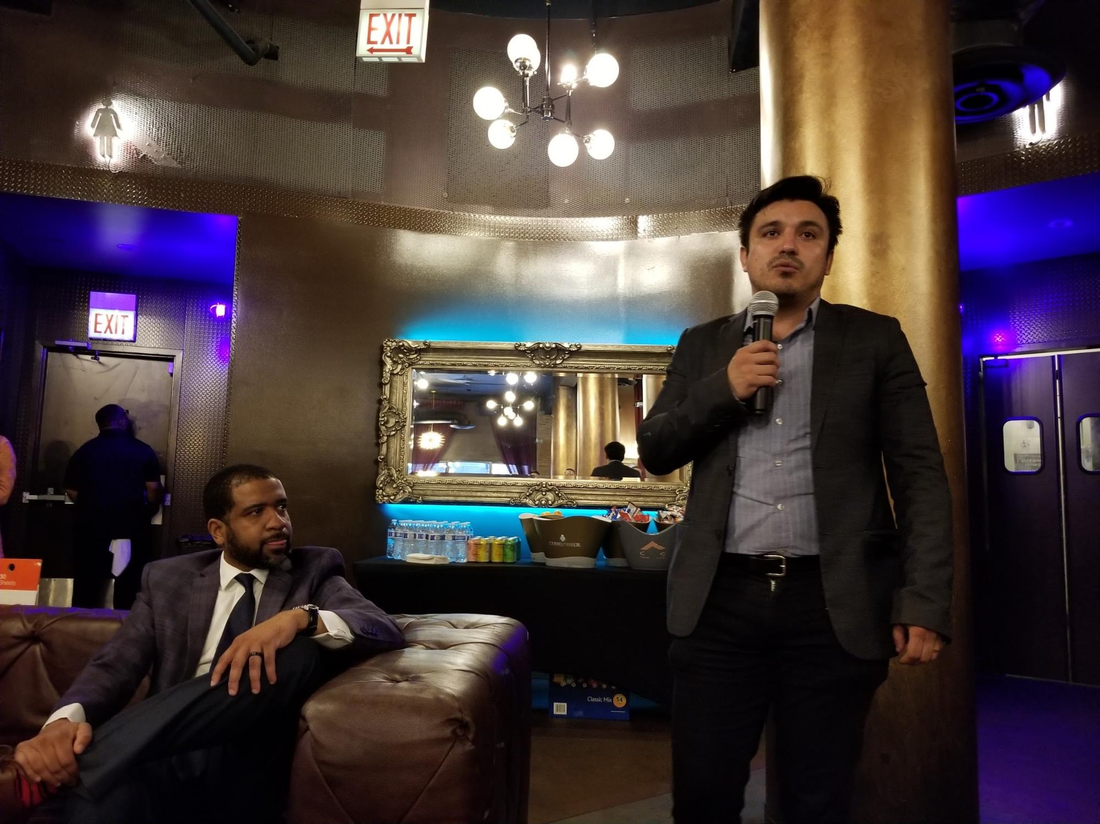 Sigcho is one of five new Democratic Socialists joining the City Council, and he's vowed to move discussions with developers from the backrooms into the open and give community residents more of a say in development decisions. The megaproject he's inheriting will be his first test.

"I'm learning quickly how development happens, and it happens fast," he said a few hours ahead of the meeting.

At the bar, a half dozen architects presented broad outlines and imagined renderings for the new neighborhood — where all streets lead to a riverfront "promenade" with a "cafe zone" of businesses, a "movement zone" for bikers and walkers, and access to the Chicago River. There will also be a 7-acre park.

The project will erect skyscrapers, move Metra tracks, add a CTA stop along the Red Line at 15th Street, build 10,000 housing units and make it possible to walk along the river from downtown to Chinatown. For many, this was their first meeting about a development that will fundamentally reshape the city, a development that sailed through City Hall with almost no debate.

If you happened into Related Midwest's presentation off the street, you could be forgiven for thinking The 78 was an affordable housing and minority jobs project, rather than a planned community for Chicago's burgeoning professional class.

In fact, Related has committed to building just 500 affordable housing units in a megaproject of 10,000 units total. The developer will pay a $91.3 million fee to the city's Affordable Housing Opportunity Fund to avoid building another 500 units within the project.

"Why do they say they are fighting to benefit our communities when by building these projects, they make our surrounding environments far more expensive, and they create environments which working-class people cannot afford to live in?" asked Miguel Del Toral in one of several small group discussions that were part of the meeting. 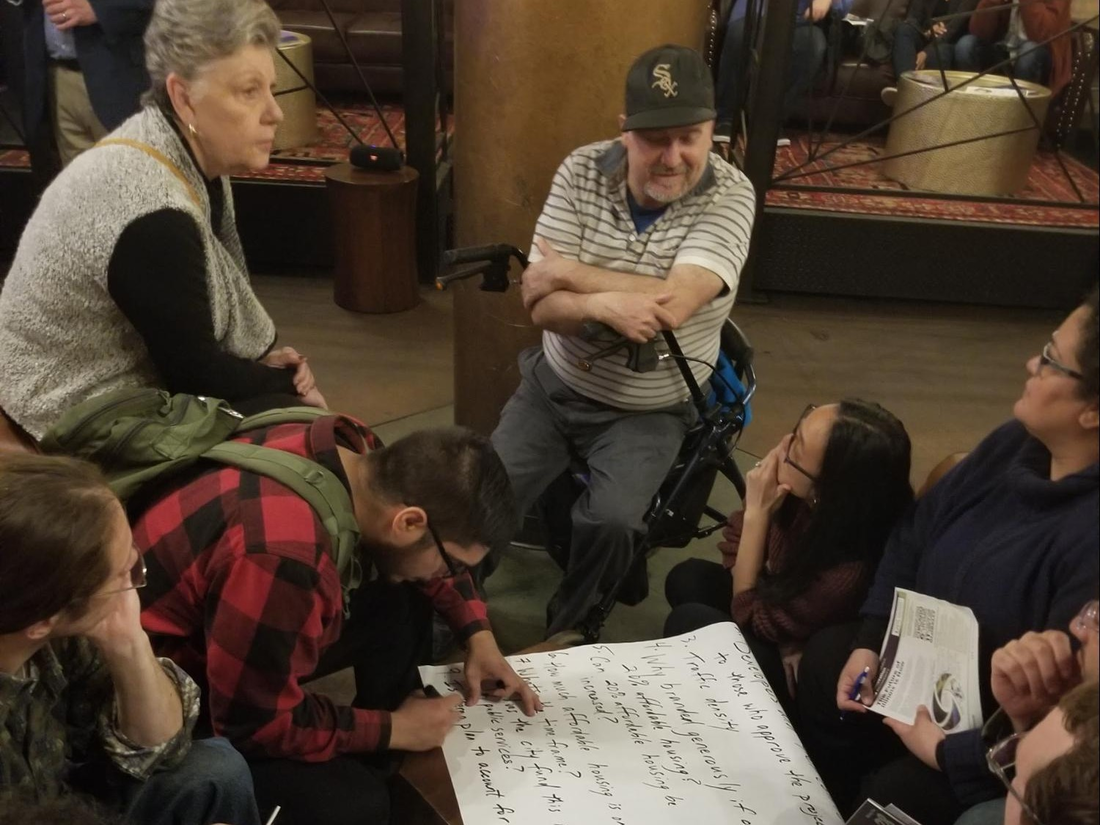 Meeting attendees gather in small groups and raise questions for developers about The 78. Incoming alderman Byron Sigcho-Lopez has said he wants residents involved in development decisions in the ward. Linda Lutton/WBEZ hide caption

Del Toral's question got written on a poster-sized sheet of paper along with others. "Is it a necessity?" one man asked. "They could have just made a huge park there."

People had logistics questions about traffic and parking and the need for future schools.

Debbie Liu, who works with the Coalition for a Better Chinese American Community, asked whether the developer would sign a community benefits agreement. "They keep saying there's all these great benefits, but there's no written thing that is mutually agreed on — so it's what they think would be great for this site," Liu said. "There's no actual contract or anything that says like, 'I will actually abide to this.'"

When publicly pressed on whether they would consider a community benefits agreement, Cooper told the crowd Related Midwest had already assembled its own "community inclusion council" and will keep working with the alderman and community.

Sigcho said all the questions community members came up with will be passed on to the developer, and he will pursue answers.

"I know that several people have said, 'We thought that this was a done deal,'" Sigcho told the crowd at the end of the meeting. "There's a lot of things that are still pending."

He said after the meeting he will push for a community benefits agreement and more affordable housing. On Thursday, the Chicago Plan Commission delayed a vote on The 78 at Sigcho's request.

Perhaps the biggest unanswered question is how much influence Sigcho or residents can have as the plan rolls out, given the project has the zoning approvals it needs and a billion dollars in promised reimbursements from the city for infrastructure.

Sigcho has promised to upend City Council's pay-to-play culture by refusing to take political donations from developers. It remains to be seen if a new mayor and more left-leaning City Council members will mean Chicagoans get a more democratic planning process, with citizens having a bigger say over what gets built and for whom.

Activists who have opposed the North Side's version of The 78 — Lincoln Yards — are also shifting their fight to a new front.

The Grassroots Collaborative and the Chicago Public Schools parent group Raise Your Hand have filed a lawsuit against the city over the Cortland/Chicago River TIF, which will cost taxpayers up to $1.3 billion for infrastructure improvements in and around the Lincoln Yards megadevelopment. 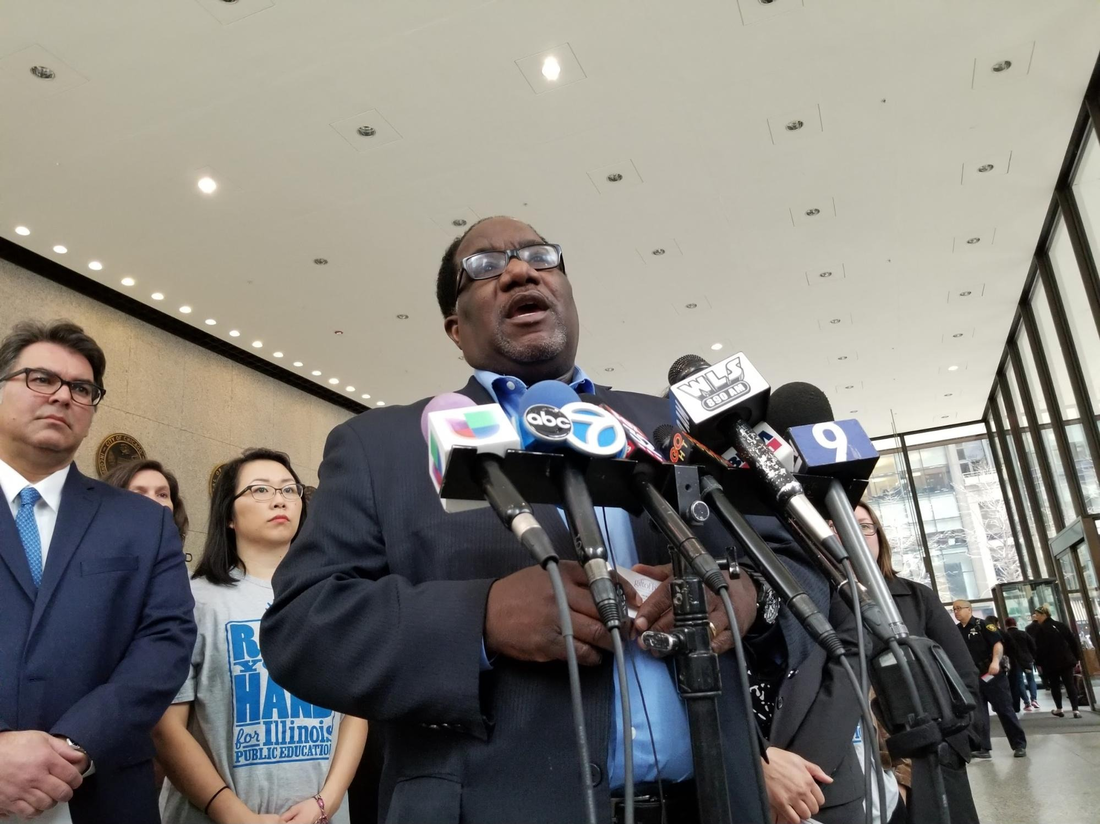 Rev. Marshall Hatch, pastor of New Mount Pilgrim Missionary Baptist Church of West Garfield Park, was among activists who spoke outside Cook County Circuit Court after a lawsuit was filed against the city over the Lincoln Yards TIF. Hatch said subsidies to projects like Lincoln Yards have created a "tale of two cities" in Chicago. Linda Lutton/WBEZ hide caption

Rev. Marshall Hatch, pastor of the New Mount Pilgrim Missionary Baptist Church in West Garfield Park, said instead of funding infrastructure for high-end neighborhoods, TIF subsidies should be going to spur development in the dozens of neighborhoods like his that the city has neglected.

The activists say they want their lawsuit to stop any money from being disbursed for the Lincoln Yards project — and they're looking at a potential lawsuit for The 78 as well. 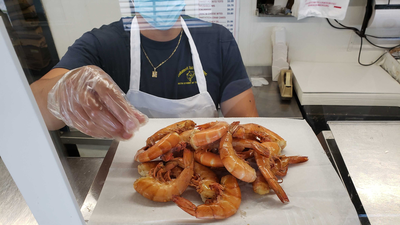 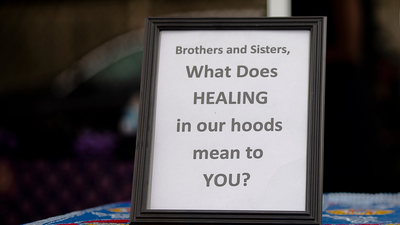 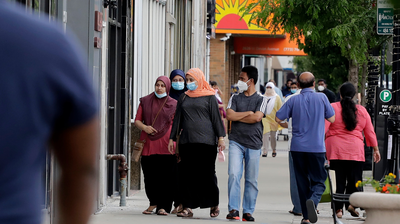 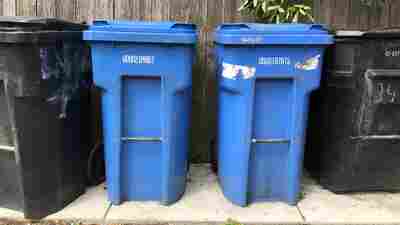 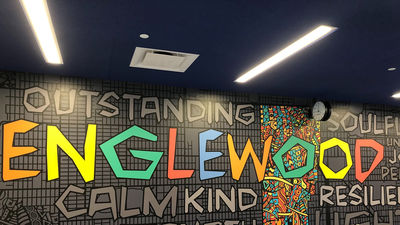