Accessibility links
The Fight For Asian American Political Power The fastest-growing racial group in Chicago and Illinois is slowly beginning to chip away at barriers that have limited its political voice. 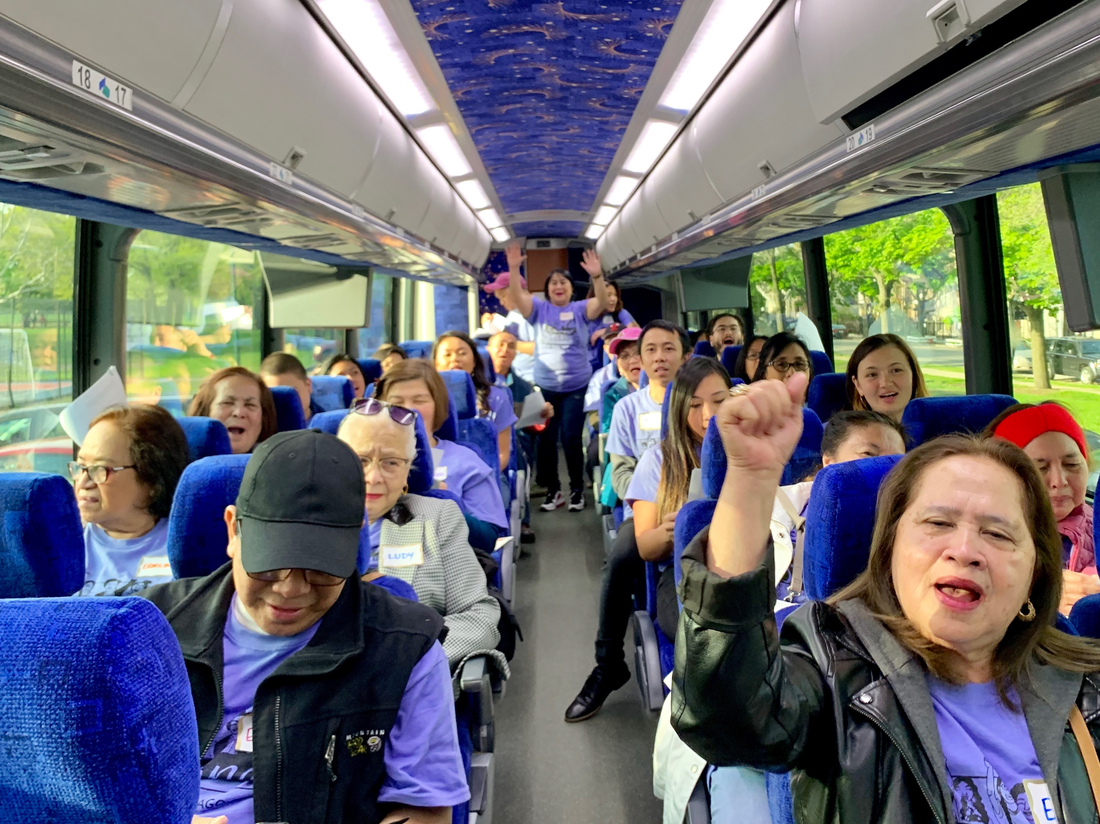 Members of the Alliance of Filipinos for Immigrant Rights and Empowerment (AFIRE) practice a chant on the bus before departing for the Asian American Action Day rally in Springfield on May 15, 2019. Esther Yoon-Ji Kang/WBEZ hide caption

On a bright, brisk Wednesday morning in May, about 45 members of the Chicago area's Filipino community waited inside a charter bus parked by Horner Park on the city's Northwest Side. Bound for Springfield, they wore matching periwinkle T-shirts with the word "Sulong" emblazoned across them — that's "onward" in Tagalog.

"We got aunties, we got youth, it's a great mix of folks, so we're really excited," said Hannah Doruelo, a community organizer with the Alliance of Filipinos for Immigrant Rights and Empowerment (AFIRE). Her group was one of a dozen Asian American organizations that gathered on May 15, Asian American Action Day, for a rally in the rotunda of the state capitol. The community's theme this year was "Count Us In," asking legislators to pay attention to the country's fastest growing demographic — especially on issues related to immigrant rights and census outreach.

Asians make up about 7% of Chicago's population and 5% of Illinois' population, but they are now the fastest-growing demographic in the city, state and the U.S. While more Asian Americans are running for office locally and in the state, the community is still underrepresented on all levels of government. For instance, there are none serving in the Chicago City Council, now that Ameya Pawar, the city's only Asian American alderman, stepped down after eight years leading the 47th Ward. 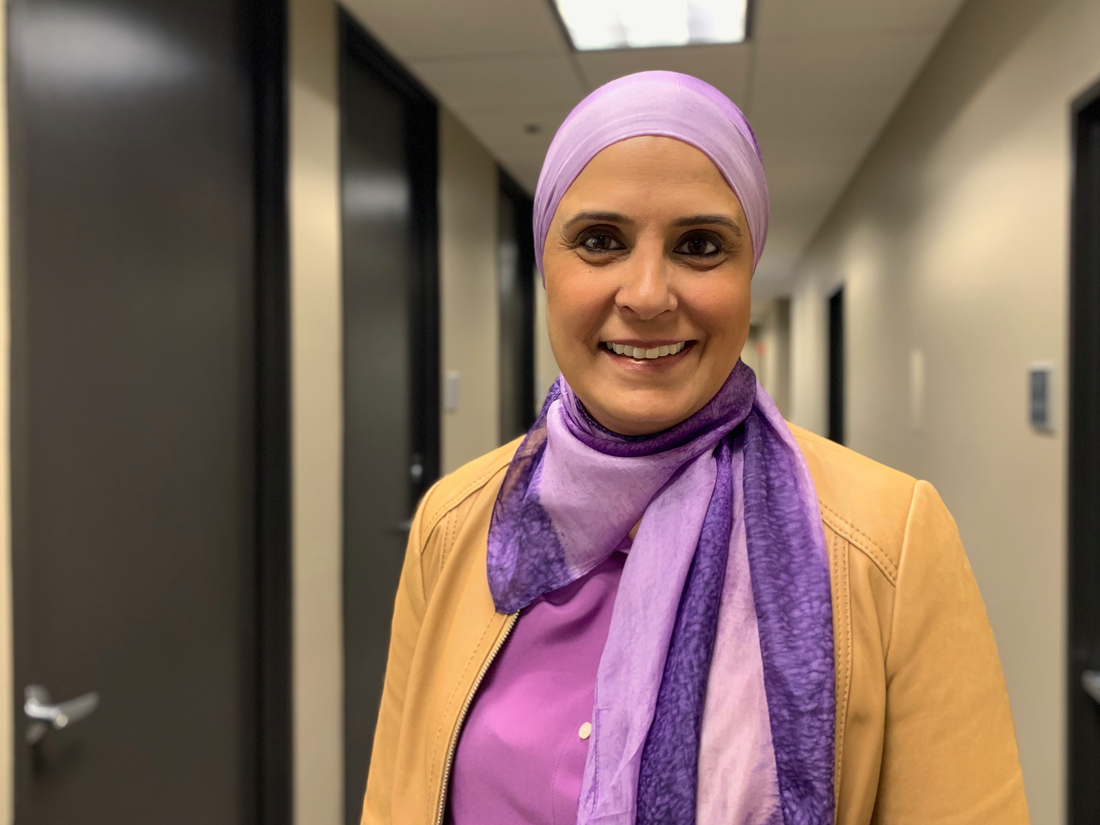 "I think we're invisible in the political world," says Dilara Sayeed, an entrepreneur and former teacher who ran for state representative in the 5th district in 2018, but lost the Democratic primary to the party-backed candidate. Esther Yoon-Ji Kang/WBEZ hide caption

"I think we're invisible in the political world," said Dilara Sayeed, an entrepreneur and former teacher who ran for state representative in the 5th District in 2018, but lost the Democratic primary to the party-backed candidate. Sayeed and other Asian Americans involved in politics said that they feel disregarded by both ends of the political spectrum, by both the white majority and other minority communities.

Asian Americans have been excluded from the political process for more than a century, said state Rep. Theresa Mah, D-Chicago, the first Asian American elected to the Illinois General Assembly.

"If you go back to the beginnings of these political organizations in our cities, they were built on the recruitment of immigrants, but only certain types of immigrants," Mah said. "They were ignored and therefore excluded from all these opportunities to move up in the political realm."

"The 'model minority' is the idea that somebody comes to this country and does everything right and makes it," said Sayeed. "The 'invisible minority' is... you've got your head down and you're working hard and you're not making any waves. [Asian Americans] are supposed to do both."

Tommy Choi, a former state Republican staffer, said that young Asian Americans often are influenced by their immigrant parents, many of whom came from countries with turbulent political histories.

"We're just told to work hard, study hard, go to good schools, get good grades," he said. "We're not really raised to be part of the civic process, to organize, to mobilize the community."

The end result is that political parties don't view Asian Americans as potential leaders, Choi said. "I think folks will kind of label us as just quiet and studious, and [that] this is not really the profession for us."

"I represent some of the poorest and least educated Asian Americans in the Chicagoland area," Mah said. "A lot of them are new immigrants, seniors, plenty of people who are either struggling to make ends meet, living below the poverty line."

She added that political organizations need a specialized approach to reach Asian Americans. "There's a special way that you have to do that," she said. "You have to have phone bankers and people going out door to door who can speak the language who seem familiar and unthreatening."

"They're actively excluding us"

Historically, Asian Americans have had low voter participation rates. After reaching a record low of 27% in 2014, Asian American voter turnout rates hover at around 30% today, compared to 50% nationally, according to data from the Pew Research Center and the U.S. Census Bureau.

Former Ald. Pawar said that one major reason for the low rates is the lack of contact with elected officials and those running for office.

"It's easy for powerful people and structures to say, 'Well, you guys don't vote so we're not gonna take you seriously.'" Pawar said. "That means they're also actively excluding us."

The same goes for those seeking office.

"We were on our own," said Lori Yokoyama, a 4th Ward Republican committeewoman who ran for Cook County State's Attorney in 2012. "And we pretty much found that the party was not supportive or not assisting us in our efforts."

Yokoyama added, "I'm trying every which way I can to participate in the party ... to get more and more involved so that they can see that Asian Americans are a valuable asset to the Republican Party."

Yokoyama said that the GOP is missing an opportunity to reach a voter base that she says shares its values, especially on marriage and family.

"The Democratic Party has been very good about reaching out, soliciting [Asian Americans] into the party, making them believe that their values are not in lock-step with Republican values," she said.

Pawar, however, said the left hasn't incorporated the Asian American experience into its agenda, either. Ameya Pawar, photographed here in the 47th Ward office during his last days as alderman, was the first Asian American to be elected to the Chicago City Council. Esther Yoon-Ji Kang/WBEZ hide caption

Pawar brought up the topic of minority contracting as an example.

"There are individuals in [the Chicago] City Council today who will be the first ones to stand up and say that Asian Americans are overrepresented and that perhaps they should be eliminated from the program," he said.

Pawar continued, "We are still a minority. If you think that we are overrepresented in some places, then what we should be doing is increasing the representation of other groups. Carving Asian Americans out, segregating us ... is a really horrible and scary response."

He said that despite the diversity within the community, bringing together the Pan Asian groups is the best path to political power.

"When it comes to making sure that our issues ... are addressed, when it comes to our ability to understand that we're being perceived very much in the same way, there [are] a lot of reasons why us organizing ourselves as Asian Americans makes a lot of sense." 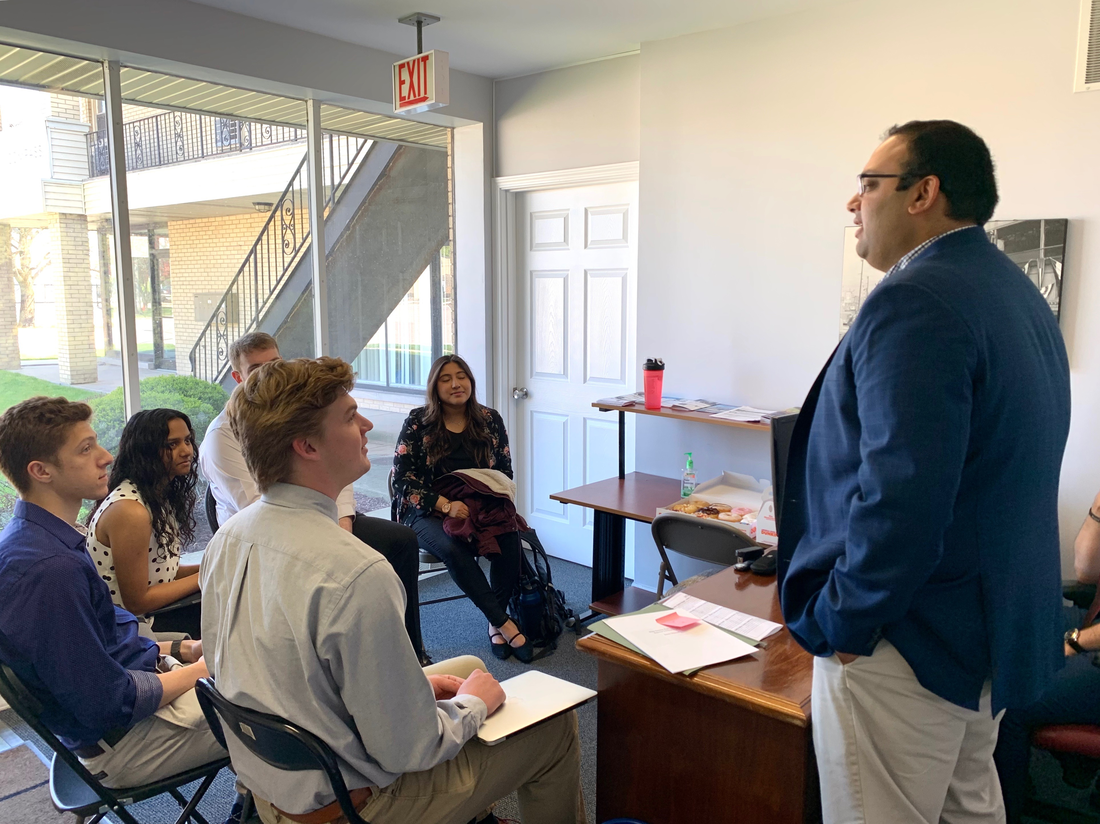 Villivalam said he is encouraged by the record number of Asian Americans running for — and winning — political office. He and Mah, along with state Rep. Jennifer-Gong Gershowitz, D-Glenview, are part of the state's Joint Asian-American Leaders Caucus, chaired by Metropolitan Water Reclamation District Commissioner Josina Morita, another champion of Asian Americans getting involved in politics. Illinois also has two Asian American representatives in Congress: Sen. Tammy Duckworth and Rep. Raja Krishnamoorthi.

Villivalam cited cabinet appointments of Asian Americans in the administrations of both Gov. JB Pritzker and Mayor Lori Lightfoot as additional evidence of progress.

"They're going to be overseeing large agencies that will really impact the lives of everyone in Illinois, including Asian Americans," he said.

The growing number of Asian Americans in office may encourage others to follow in their footsteps, Kang said.

Still, he stressed that representation alone will not fully address the needs of Asian American communities.

"We want to really get away from the idea that a few elected officials are going to save the day," Kang said. "What really is needed is more of our community members voting and being civically engaged, showing up and engaging their [leaders]." 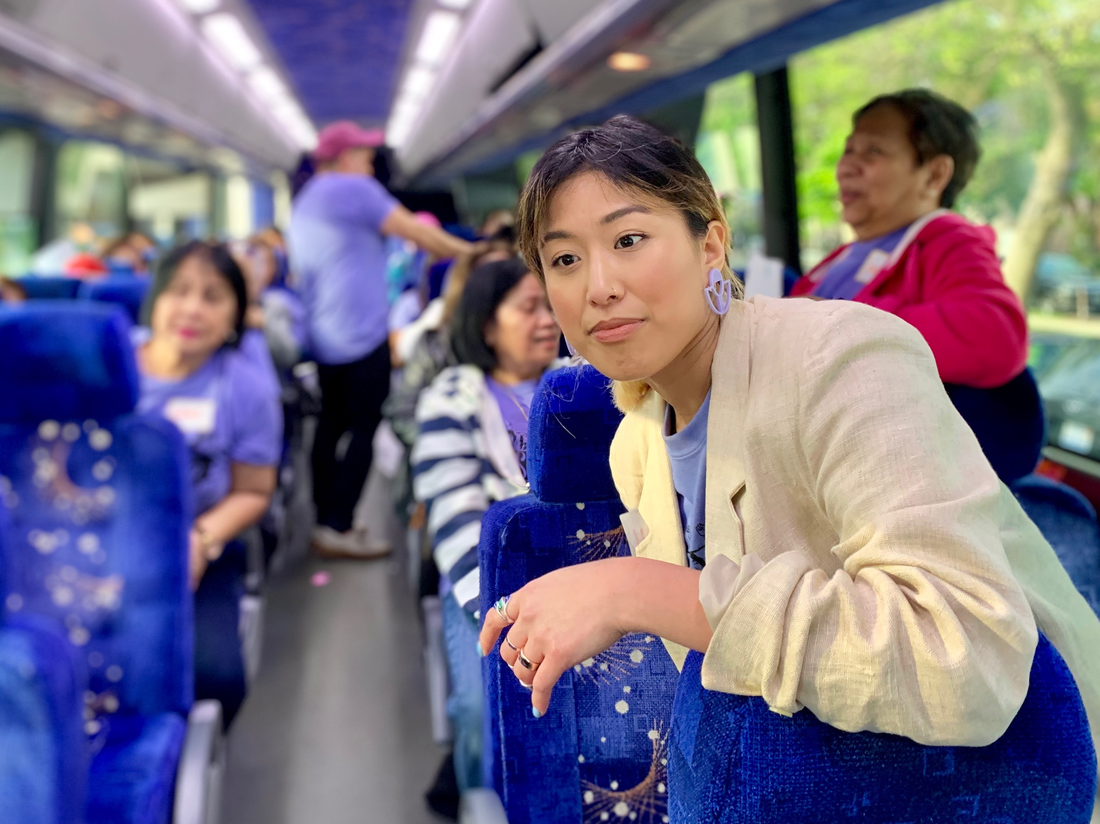 Hannah Doruelo, a community organizer for the Alliance of Filipinos for Immigrant Rights and Empowerment (AFIRE) waits for the bus to depart for Springfield on Asian American Action Day. Esther Yoon-Ji Kang/WBEZ hide caption

About six hours after they boarded the charter bus Springfield, members of AFIRE, the Filipino group, and a dozen other Asian American organizations showed some of that civic engagement in a lively call and response in the rotunda of the state capital. Together, they make up Pan-Asian Voter Empowerment or PAVE, a coalition dedicated to building political power in the Asian American community.

At 1:30 in the afternoon, Hannah Doruelo, AFIRE's 24-year-old community organizer, stepped up to the podium to co-emcee the event. Villivalam, Mah and leaders from various Asian American groups also addressed the crowd.

At the end, Doruelo taught the 300-plus gathered in the rotunda a chant in Tagalog.

Makibaka! she shouted — a phrase that means "struggle onward."

That phrase, Doruelo explained, means "Do not be afraid."

Esther Yoon-Ji Kang is a reporter for WBEZ's Race, Class and Communities desk. Follow her on Twitter at @estheryjkang.