Accessibility links
Here's Harold! (The Robot Edition) The DuSable Museum says — creepy or not — its Harold Washington robot will teach you a thing or two about the city's first African-American mayor. 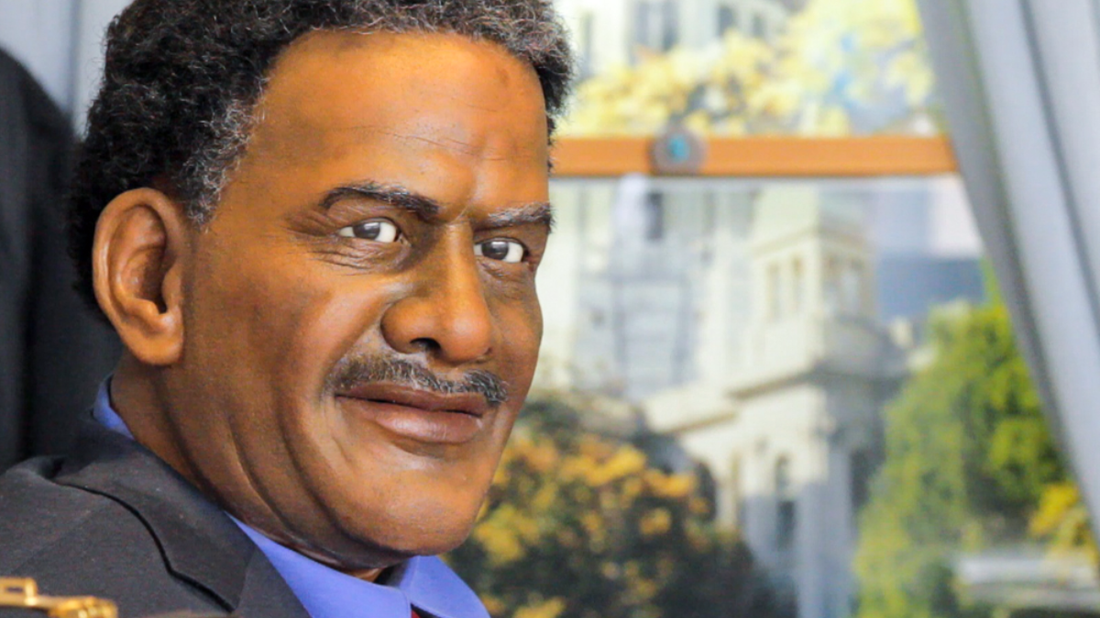 Editor's note: Since we first reported this story in 2015, Charles Bethea has left the DuSable Museum for a job as Chief Curator of the Reginald. F. Lewis Museum in Baltimore, Maryland.

A lot of folks who submit questions to Curious City take the call quite literally: What do you want to know about Chicago, the region or the people who live there? Questioner Jon Quinn put his own twist by submitting our first (and only) question about a robot — not just any robot, but the talking, animatronic likeness of former mayor Harold Washington that sits in a corner of the DuSable Museum of African American History.

Jon had caught the robot's act and — like thousands of patrons before him — had learned that Harold Washington was a big deal: He'd been a state representative and senator in Illinois, then a U.S. congressman, and Chicago's first black mayor. First elected as mayor in 1983, Washington won a second term with the help of multi-racial political coalitions that survived well beyond his death in 1987.

Jon was intrigued by the man, but his mind was fixed on the animatronic likeness:

His question's informed by his observation that the robot is "creepy," and it reminds him of an animatronic likenesses you can find at Chuck E. Cheese pizza restaurants or trips to Disney World's Hall of Presidents.

"I loved the Hall of Presidents but, um, it was terrifying," Jon says. (He knows a thing or two about Disney World, having grown up in Central Florida.)

To answer Jon's question, we put together the robot's origin story. Along the way, though, we couldn't help but ask: Is this a good way to portray the former mayor?

Born from the mind of an ideas man

When Charles Bethea was appointed curator of the DuSable in 2002, the museum was looking to create a permanent exhibit about Harold Washington within a wing that had been dedicated to him back in 1993. Bethea was charged with bringing more oomph to the museum and keeping school-aged visitors interested. Any depiction of Washington himself would have to be new and life-like. Also, it should keep up with new technology.

"With Harold Washington being this over-the-top, larger-than-life figure, we wanted to honor him in a specific way," says Bethea, adding that a museum should be considered a non-traditional classroom. "You have to strike a balance between education and entertainment, especially with history museums."

Bethea and his team spent four years cycling through options, dispensing with staid life-sized statues made of bronze or others covered in resin. Eventually, someone mentioned that animatronic technology was dropping in price, with costs ranging between $10,000 and $30,000, depending on how large a figure's range of movement needs to be.

The DuSable team hired Life Formations, an Ohio-based factory of the life-like that's created everything from Abe Lincoln to a drum-playing gorilla. Bethea says the most expensive (and difficult) part of the partnership was the "human sculpting," or coming up with a just-right Harold. Bethea gathered photos, interviews, and even an iconic Playboy magazine profile article to help Life Formations recreate Washington's likeness. 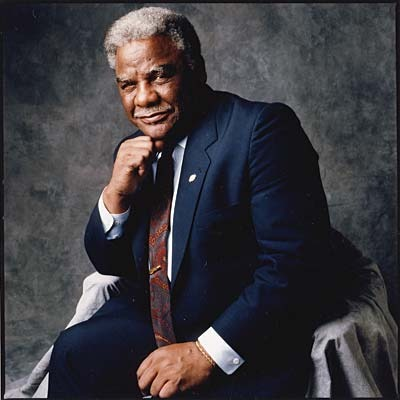 Translating that material fell to a team that included designer and project manager Travis Gillum.

"They gave us quite a bit of video footage that we tried to work from," Gillum says, adding that Washington smiled quite a bit. "If [an animatronic has] to speak sternly as part of their character in final form, that becomes a little bit weird if they have a smile on their face." Gillum says historic figures such as Washington and Abraham Lincoln typically require special care.

"That's a tough line to walk, especially with the humans," he says. "Obviously if you're not very realistic with the human, it can be somewhat disappointing and sometimes creepy. But at the same token, if it's ultra-realistic, that can be really creepy to people."

Gillum's nodding to the concept of the uncanny valley, coined in the 1970s by robotics professor Masahiro Mori. Even with that idea firmly in mind, Life Formations aimed to make Washington look realistic.

Bethea invited Washington's family to review the robot's development. Bethea says there was some back-and-forth, mostly around big-ticket items. For instance, some family members felt the early bust of Harold's head (still pigmentless and hairless at that point) actually looked like "their Harold," but the museum gave the robot several hairdos because the curl pattern wasn't quite right and the grays weren't scattered accurately.

Another consideration: Washington died at age 65, but which time in Harold's life should the robot depict? Washington's hair greyed as he served as mayor, but he had also gained dozens of pounds during his terms. The family felt that the final body of the 'bot was too slim. Washington had weighed 284 lbs at his death, but Bethea says he took "artistic license" by representing a healthier Washington that looked closer to age 58.

At the touch of a button, the Harold Washington robot gives three presentations, one each about Washington's mayoral campaign, his struggle to push a legislative agenda during Chicago's Council Wars, and his funeral and legacy. (A kicker: He invites patrons to check out Chicago's population of green parrots — a fixture of the South Side's Washington Park.)

Did they get it right?

Bethea's a fan of the DuSable Museum's Harold Washington likeness (he calls it "his baby"), but not everyone is sold on how the robot turned out. Jacky Grimshaw, Vice President of Policy at the Center for Neighborhood Technology, and one of Washington's former advisors, says the Harold 'bot is okay for people who didn't know him, but it doesn't dig below the surface.

"For me, it doesn't really get at who Harold was," she says.

A young Grimshaw first knew Washington from Corpus Christi Church, where she saw the future mayor hobnob with Chicago aldermen and other politicians. While she was graduating college, Grimshaw's mother was involved in Washington's campaign for Illinois senator. It wasn't long before her mother set her up with a gig as a staffer. Later, she served in Washington's own mayoral administration, where she formed housing policy.

Grimshaw believes DuSable visitors don't sense Harold Washington as a person; it's not that a patron should know Washington preferred eggs or oatmeal for breakfast, but to understand him, she says, they need a heftier dose of his personality. He moved people, she says. Seeing him in action was like a 1983 edition of Obama's "Yes We Can" campaign.

"He was such a magnetic person that you would know he was there," she says, adding that that was the case in small venues or in rooms of more than a hundred. "That exhibit doesn't even begin to relay that kind of personality, that kind of magnetism, that interaction with people which I believe ... was nourishing to him."

For museum curator Bethea, the proof of the robot's effectiveness is its impact.

"You gravitate towards it and it pulls you in, then you really start to think about that person's life; legacy and where they fit history and how hopefully you relate," he says.

Interestingly, that's exactly what happened for Jon Quinn, our questioner. After his encounter with the robot, he spent two months diving deep into Harold, his history and his legacy: He sought out This American Life's two part special on Washington's legacy, read the biography Fire on the Prairie, and he closely watched Chuy Garcia's 2015 mayoral campaign. Garcia campaigned for Washington and considered him a mentor. Garcia lost the 2015 race for mayor to incumbent Rahm Emanuel.

Quinn even thinks it should be a requirement that Chicagoans venture to the DuSable Museum.

"As strange and odd as that [animatronic] was, it was a really important afternoon for me in this weird way because it got me thinking a lot about this person and his legacy and what things from his mayoralty are still with us," he says. "It went from this moment of eerie, uncanny valley creepiness to this fascinating exploration of the city's recent history and politics." 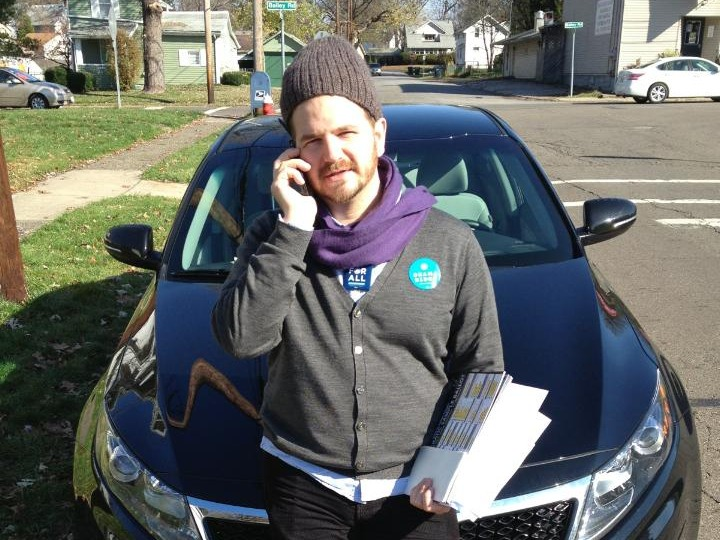 Jon Quinn, a philanthropic advisor who lives in Chicago's Logan Square neighborhood, grew up in Central Florida and went to Disney World — a lot. He geeks out about presidential history and political firsts, so when his first stopover at the DuSable Museum of African American History was underscored with an air-compressed politician, he was creeped out.

"But then the amazing thing was, I got over that, and was deeply engaged," he says. Quinn and his friends were also thrust into let's-ask-Curious City-land with a ton of questions in mind.

Among them: whether contemporary politicians could find some inspiration.

Jon was also troubled that in all his nine (non-consecutive) years living in Chicago he had never been to the DuSable Museum.

"I even went to college at the U of C, right around the corner," he says. Transformed by his afternoon there, he now believes it should be a requirement that all Chicagoans visit the DuSable and all of the other history institutions the city has to offer.

Gabriele Collins is a journalist based in Atlanta, Georgia. You can follow her @GabiAWright.