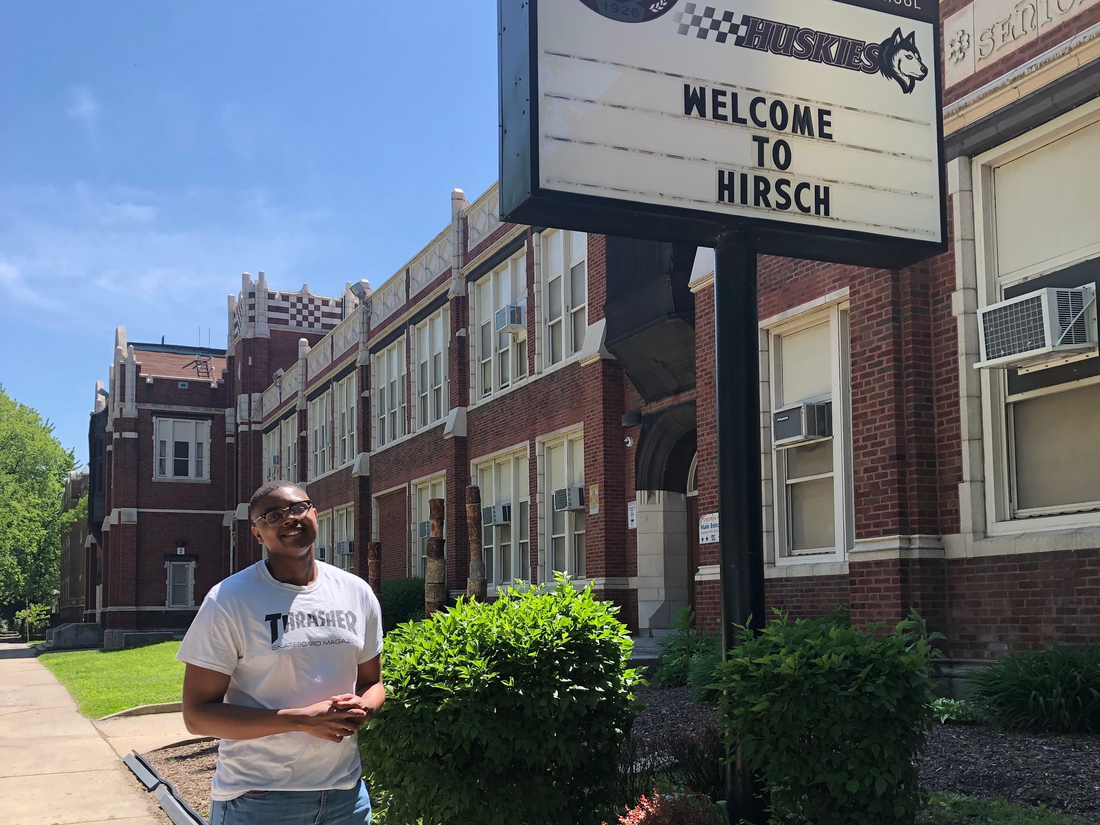 Marcus Goley is a 2019 graduate of Hirsch High School in the Greater Grand Crossing neighborhood on Chicago's South Side. He wasn't considering a gap year before he was selected for a program that will send him to Ecuador for a year before college. Sarah Karp/WBEZ hide caption

Four Chicago teens from low-income families are getting a chance to do something usually reserved for the wealthy.

They will get to take a trip of a lifetime during a gap year after high school — for free.

As part of a partnership with Chicago Public Schools, an organization called Global Citizen Year will send the four students to a foreign country next year to live with host families and work in schools, farms or health clinics.

The Oakland, California-based organization says the experience costs $32,000, but these students are getting full scholarships.

The partnership came about after city and school district leaders announced a new requirement that graduates must develop a plan for life after high school. The policy, which doesn't go into effect until 2020, allows for students to take a gap year.

Abby Falik, founder and CEO of Global Citizen Year, said she approached CPS officials because she worried students would dismiss the option.

"The term gap year has been so exclusive and elitist in the past," Falik said. "If it did not have some description or set of offerings that were actually robust and accessible to a broad set of people, it might be tone-deaf and not feel inclusive."

Usually, Global Citizen Year chooses young people based on their leadership qualities and asks families to pay what they can afford. CPS officials say that Global Citizen Year is the only organization with a formal partnership with the school district, but other groups recruit students and work with schools to provide opportunities. 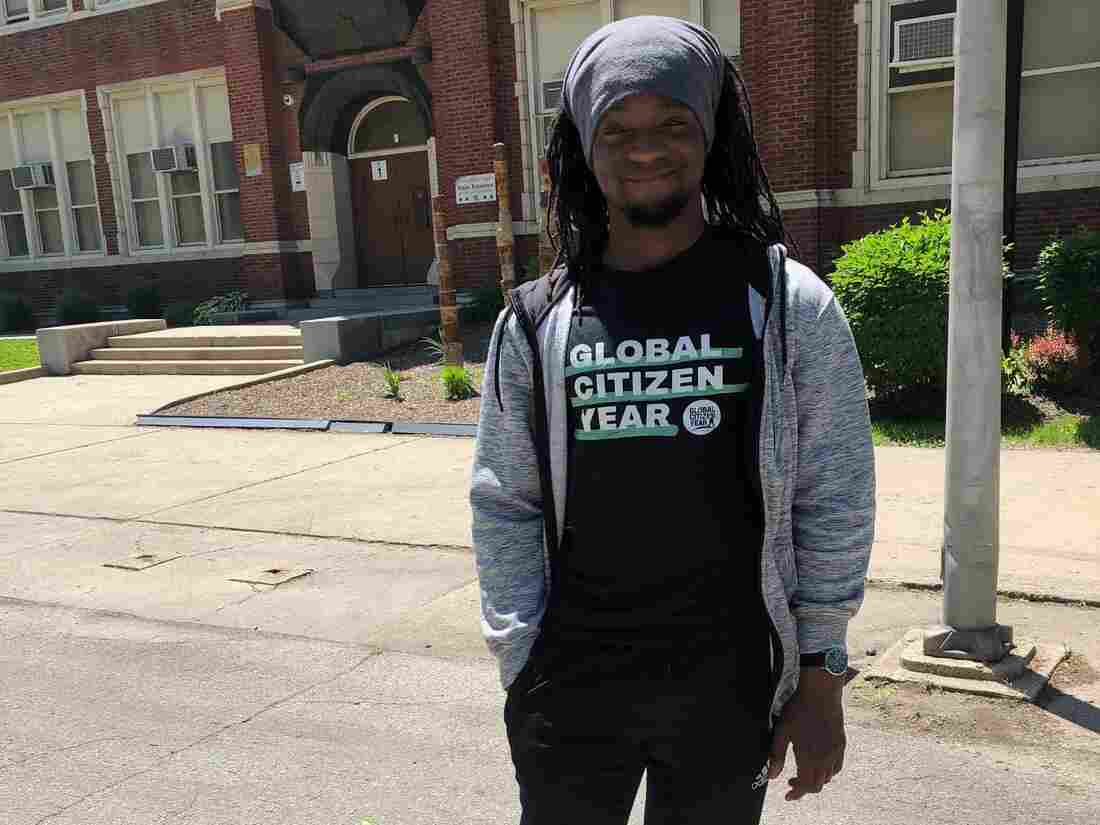 Aaron Johnson will spend his gap year in Brazil through the group Global Citizen Year after graduating from Bridgescape Academy after attending Crane Medical Prep on Chicago's West Side. Sarah Karp/WBEZ hide caption

"Ready for what it has to offer me"

As Marcus Goley entered his senior year at Hirsch High School in the Greater Grand Crossing neighborhood on the South Side, he was not even considering a gap year.

"I did not think it was for me," he said. If Marcus took time off between high school and college, he thought the only thing he could do is work. He is being raised by a single mom, and she wouldn't have enough money to send him backpacking around Europe or to do something fancy like that.

So, Marcus focused on filling out dozens of applications for college. "I didn't really think of any possibilities except that," he said.

But when his counselor told him she recommended him for the Global Citizen Year program, Marcus was intrigued. Yet, as a student from one of the lowest-performing schools in the city, he doubted he would be chosen.

When Marcus received word he got in, he couldn't believe it. He was on his way home work, standing on a train platform, and he wanted to shout to the world.

"When they actually gave me the call, I didn't believe it," Marcus said. "I realized I needed to take the opportunity because a lot of people would kill for the position that I am in. I am just ready for what it has to offer me."

Two other students chosen this year said they knew they didn't want to go to college, at least not right away.

Zion Barnett-Bishop said her school, Kenwood Academy on the South Side, has a strong college-going culture, and she applied a few places. But, in her heart, she didn't feel ready.

"I just think that I have a lot more maturing and I am not 100% sure what I want to do, and so I really think that this time is a good spot in my life to figure that out instead of just rushing into business administration or computer science," Zion said.

Ruby Levin from Senn High School on the North Side said she didn't know what she wanted after high school. Her counselor nominated her and sent her a link to the program. Ruby said she started watching videos.

Both Zion and Ruby are headed to Senegal next year. They say they chose Senegal because DNA tests showed they had roots there.

Ruby , who is black and was adopted by a Jewish family, said this makes the journey especially meaningful for her. She said she thinks it will help her create her "own personal label for herself."

The fourth student, Aaron Johnson, said the gap year option came at the right time because he's still figuring out how to pay for college.

He's been out of the country before and said knows how eye-opening it can be.

When he was at Crane Medical Prep on the West Side, another organization offered the chance to go to China for a school year.

Few students applied, which meant he was able to go twice. This time Aaron, who lives in South Shore, is headed to Brazil.

Falik said Global Citizen Year alumni are more likely than those going straight from high school to college to graduate, and more likely to do it in four years.

Marcus said he is hoping the year in Ecuador will give him more options when he eventually goes to college.

Marcus said he plans to work with Global Citizen Year staff to look at other schools and scholarships.

He's betting the experience abroad will prove invaluable. He is especially excited about learning Spanish and getting to eat Latin food. He also wants to develop his leadership skills so he can return to his neighborhood to help improve it.

"I still can't believe this is what I am really doing," he said.