Accessibility links
How Healthy And Safe Are Our Great Lakes? Two conferences in Milwaukee this week dig into the health of Lakes Huron, Ontario, Michigan, Erie and Superior. 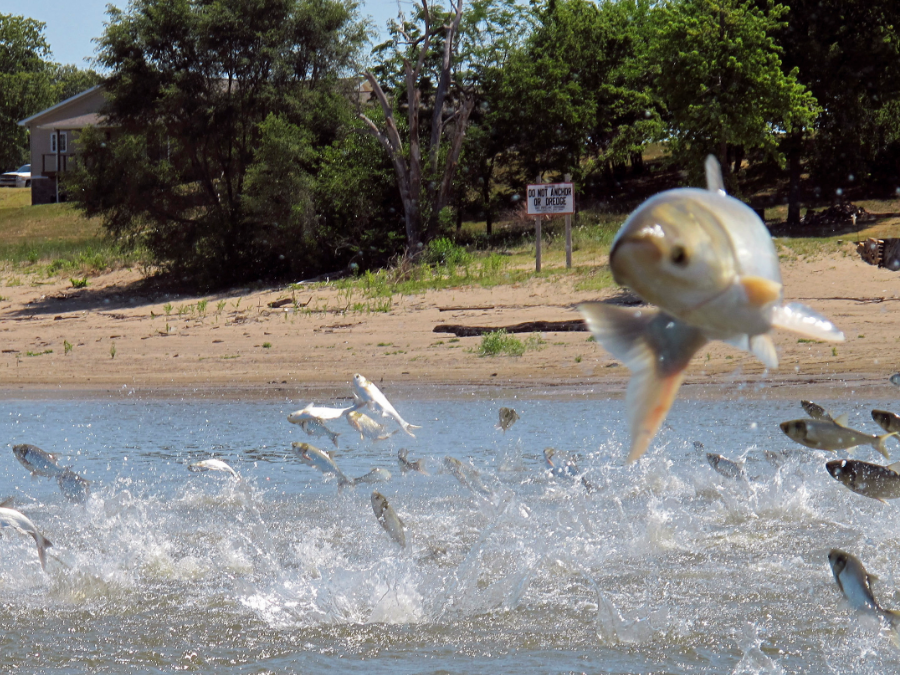 In this June 13, 2012, file photo, Asian carp, jolted by an electric current from a research boat, jump from the Illinois River near Havana, Ill. Illinois Gov. JB Pritzker recently signed on to a project to work with federal officials and other states on a strategy for fortifying a lock and dam to keep Asian carp out of Lake Michigan. John Flesher/Associated Press hide caption

Every three years, the United States and Canada convene for the Great Lakes Public Forum, a chance for both parties to talk about the health of the Great Lakes.

The triennial event being held this week in Milwaukee brings together officials from the U.S. Environmental Protection Agency and Environment and Climate Change Canada to hear from the public on everything from invasive species to discharge from vessels to habitat restoration.

Over the weekend, the U.S. governors and Canadian premiers from states and provinces bordering the lakes also held meetings in Milwaukee to discuss drinking water issues.

Morning Shift checked in on these two conferences and about the overall health and safety of the freshwater in the Great Lakes.

What are the goals of these two gatherings?

On new leadership in the Great Lakes states, cooperation between Canada and the U.S.

Flanagan: We have five new governors, but two new premiers — so seven total. ... This was the first time that these new administrations were able to meet face to face and actually talk about their priorities for the Great Lakes.

Jenn White: How has cooperation worked in the past between Canada and the U.S.?

Flanagan: Cooperation between the two governments is actually pretty good, and we have an agreement called the Great Lakes Water Quality Agreement that sets priorities for Great Lakes protection and restoration. And then the two federal governments work together to try to achieve those priorities.

One of the critical ways that the United States tries to deliver on those Great Lakes priorities is through something called the Great Lakes Restoration Initiative, which is pumping significant federal dollars into projects and communities across the region.

White: And what are we hearing from Illinois' new governor JB Pritzker around these issues?

Flanagan: We're really pleased that the governor of Illinois recently signed on to a project to support efforts to stop Asian carp from getting into the Great Lakes. Asian carp grow up to 100 pounds, and they're the fish you see flying through the air and it looks kind of funny on YouTube videos, but it's actually terrifying.

Flanagan: They pose a threat both to the environment and economy of the Great Lakes. Asian carp eat a lot and they reproduce multiple times a year, and so they're able to outcompete a lot of native fish. In parts of the Illinois River where we have Asian carp, they make up more than 90% of the biomass in the river.

The Great Lakes themselves support a $7-billion-a-year sport fishing industry and a $16-billion-a-year recreational boating industry. Having Asian carp flying through the air and hitting people that are fishing and boating on the Great lakes would certainly be catastrophic for those tourism industries.

White: Now, the plan to fortify the Brandon Road Lock and Dam near Joliet, Illinois — it includes loud speakers, electric cables and something called an "air bubble curtain." Can you explain how this works?

Flanagan: You can sort of think of it as a fish disco that no one wants to go to. So it's not the kind of disco you want to party at. The fish, they don't like the sound. The electric barrier actually shocks them, so they swim away or are rendered unconscious and actually slip downstream. And the air bubble curtain is intended to dislodge fish that might get caught up as they go through the lock.

So you can also think of it as a fish gauntlet. If one of those pieces of protection doesn't work, then there are others in place as fail safes to make sure the carp don't get through that lock.

White: What does it mean for native species?

Flanagan: Unfortunately, the same technologies that we keep Asian carp from going through the lock will prevent natives species from going through the lock. But there are plans in place to help bolster native species and to transfer them from below Brandon Road Lock to above the lock so that native species continue to exist in places further upstream.

On other invasive species, drinking water and safety issues

Flanagan: There are a number of invasive species in the Great Lakes that were introduced by ballast water, which is discharge by ships coming in from other parts of the world into the Great Lakes.

They discharge ballast water when they take on cargo, like grain or steel, and they discharge things like zebra mussels, which are the reason that Lake Michigan is so clear and sort of looks like the Caribbean. But they also cause problems because they eat the bottom of the food chain and end up devastating native fish populations.

White: Well, it's easy to get fixated on Asian carp, but there's also this question of drinking water and safety issues around that. Lay out what was discussed around that issue.

Flanagan: It was really great to see the governors and premiers taking up drinking water as a central issue that they want to address. And one of the significant things that they did at their conference in Milwaukee was to ask the federal government to provide increased funding for something called the Safe Drinking Water Revolving Fund, and that funding provides federal dollars to the states to upgrade water infrastructure.

White: How much money are we talking about?

Flanagan: When we're just talking about drinking water, we need — across the eight Great Lakes states — $179 billion over the next 20 years to replace drinking water infrastructure. But keep in mind that 40 million people are relying on the Great Lakes for their drinking water.

And what we've seen is that federal investment has really decreased over the past few decades. And what that's meant is that water rates have gone up in communities around the region that stresses low-income households and makes water less affordable.

This interview has been edited for brevity and clarity by Stephanie Kim. Click the "play" button to hear the entire conversation.

GUEST: Molly Flanagan, vice president of policy at the Alliance for the Great Lakes