Accessibility links
Great Lakes States Meet To Discuss Cost of Fish Repelling Sound Speakers The meetings include agency heads from Great Lake states who are in Chicago to talk about how to stop invasive Asian carp from getting into Lake Michigan and beyond. 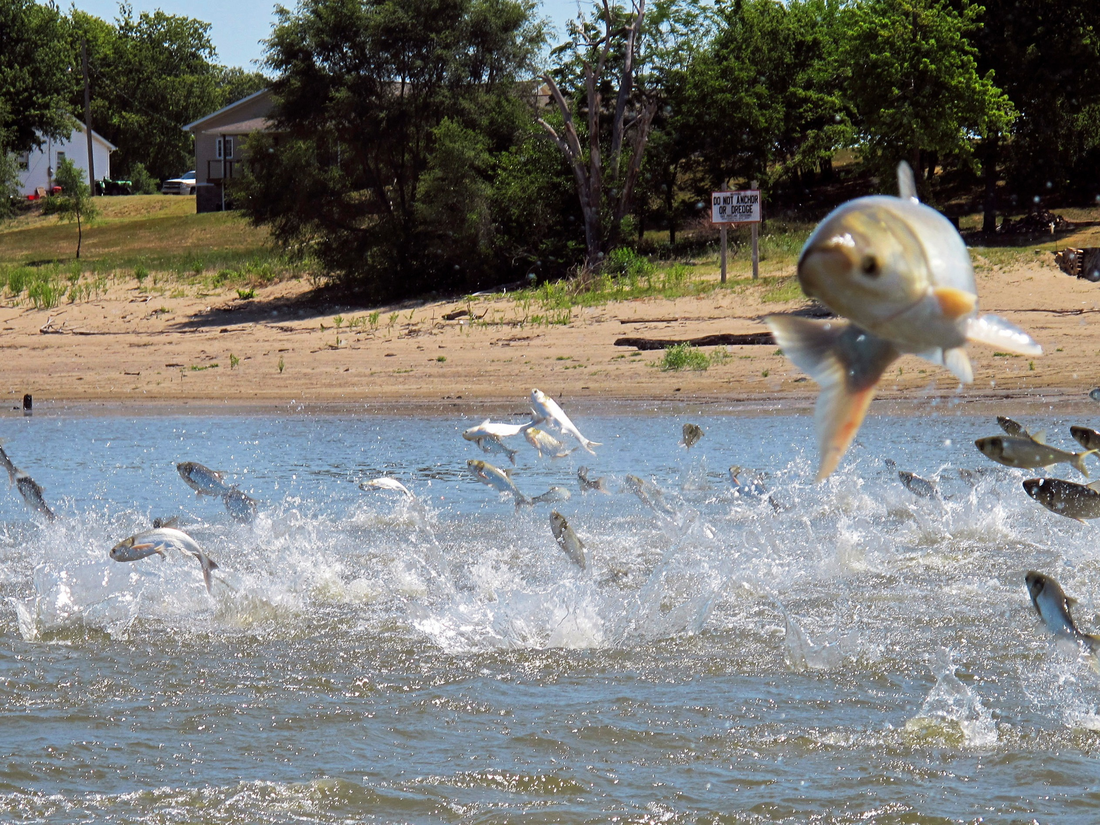 In this June 13, 2012, file photo, Asian carp jump from the Illinois River near Havana, Illinois. This week, agency heads from Great Lakes states are meeting to discuss how to stop the fish from getting into Lake Michigan and beyond. John Flesher/Associated Press hide caption

Officials from six U.S. states and two Canadian provinces are meeting in Chicago this week to talk about a radical solution to stop invasive Asian carp from getting into the Great Lakes.

Officials are discussing a proposal to install technology to fortify the Brandon Road Lock and Dam in southwest suburban Joliet, about 40 miles from Lake Michigan. The dam has been identified by the U.S. Army Corp of Engineers as a crucial choke point between Lake Michigan and the Illinois River, which is already infested with Asian carp.

The $831 million proposal includes an electric barrier and massive underwater speakers that would blast sound to repel Asian carp that try to swim toward Lake Michigan. It would also include an "air bubble curtain" that would create a barrier of air bubbles and a "flushing lock" that would wash away carp that might be floating on the water as vessels pass through.

Asian carp were last detected in a Chicago waterway upstream of the Illinois River in 2017, when one was found in the Little Calumet River, about nine miles from Lake Michigan, past an already installed electric barrier.

The fish were imported in the early 1960s and 1970s to control algae at farm ponds in the South. But they escaped, and have been swimming upstream and reproducing ever since. Scientists say if they make it to the Great Lakes, Asian carp could devastate Lake Michigan's underwater ecosystem, outcompeting native fish species for food and space.

That would have drastic effects on a multibillion dollar commercial fishing industry and estimated $7 billion industry supported by water recreation, as Asian carp are known to dominate underwater space and propel themselves into the air when frightened.

"If you are a boater ... you don't want 20-pound fish flying at you 30 miles per hour while you're out on the water," said Robert Hirschfeld with the environmental advocacy group Prairie Rivers Network. "That is a significant safety concern."

"Carp are often disturbed by the frequency of sound or the vibrations of boat motors," Hirschfeld said. "So you'll see pods of thousands of them jumping 10 to 15 feet out of the water, which has made for some dynamic YouTube video."

That's what made the Army Corps want to study how it could use sound to deter the fish from swimming upstream towards the Great Lakes.

Dr. Marybeth Brey with the U.S. Geological Survey has been developing the sounds in partnership with the Army Corps. Fish are placed in a pond with speakers on both sides that blast different types of test sounds.

"And what we found is that we were able to repel the fish back and forth," Brey said.

Sound that would be used as part of the project at Brandon Road Lock and Dam is still being developed, and Brey said the Army Corps has so far seen mixed reactions from fish.

"The first is that they just slowly turn around and they go the other direction, and that's actually the response that we're looking for," she said. "Another is jumping. That's where sometimes people can get hit by them and get hurt. And then a third response can be that they freeze."

Still, Brey said preliminary results show sound could be effective in getting Asian carp to safely swim in the opposite direction.

Hirschfeld, the environmentalist with Prairie Rivers Network, said he's glad to see some action on the issue but has doubts about the technology.

"This solution that's been proposed will achieve some amount of risk reduction of Asian carp getting in the Great Lakes," Hirschfeld said. "That's good."

But he said it doesn't go far enough.

Hirschfeld notes that the sound deterrent is considered experimental at this point, so it's only been installed in one location on the Mississippi River. There's also an acoustic barrier being installed on the Cumberland River in Kentucky. The plan being discussed in Chicago meetings represents a compromise between people such as Hirschfeld, who want to take the more drastic step of installing a physical barrier, and agencies such as the Army Corps that believes a physical barrier would massively disrupt cargo shipping along Illinois waterways. Hirschfeld argues a physical barrier at Brandon Road Lock and Dam would keep Asian carp downstream in the Illinois River, where they've already invaded.

Under the Brandon Road Lock and Dam proposal, the federal government would pay 65% of the $831 million tab, with non-federal partners, such as states, picking up the rest. Illinois Governor JB Pritzker has expressed initial support for the project but wants to make sure his state isn't paying more than its fair share.

The meetings in Chicago this week are meant to gauge what non-federal financial support among states might look like.

Congress still needs to approve the plan, and the federal money for it. 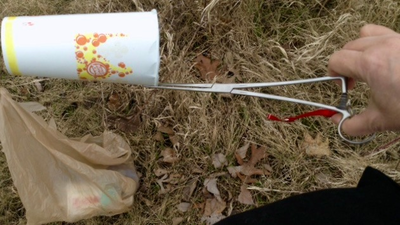 Curious Citizens offer up some suggestions for making your daily walk beneficial to your health and the environment. Jen Johnson/WBEZ hide caption

Outdoor Activity Of The Day: Pick Up Trash

April 3, 2020 • Curious Citizens offer up some suggestions for making your daily walk beneficial to your health and the environment. 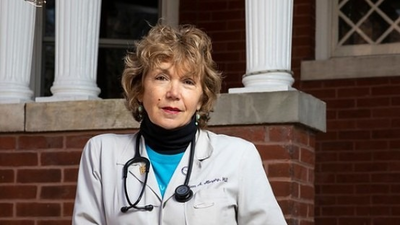 Eileen Murphy, a retired doctor, volunteers to return to work in Illinois amid the outbreak of COVID-19. Manuel Martinez/WBEZ Chicago hide caption

April 3, 2020 • Nurses were already in short supply before the pandemic began, and Illinois hospitals are competing with other states for extra workers. 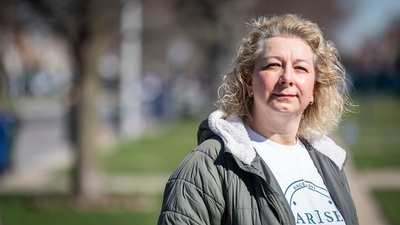 Maggie Zylinska, who works cleaning homes, said some of her clients have paid her in recent weeks despite canceling appointments. Manuel Martinez/WBEZ hide caption

Trying To Pay The Rent, And Trying To Collect It, During The Coronavirus

April 3, 2020 • The coronavirus crisis has pushed thousands out of work, and both tenants and landlords are worried. 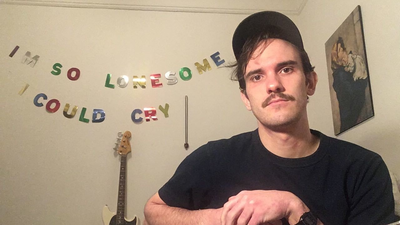 Greg Obis said he's "lucky" to have consistent work as a mastering engineer during the pandemic. His other gigs running sound for venues are on hold. Provided photo/Greg Obis hide caption

April 2, 2020 • "I feel like some will survive, some will die off and some will grow back in a different form," said Emily Kempf of the punk band Dehd. 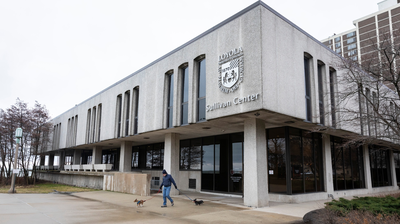 The Loyola University Chicago campus is deserted save the occasional dog walker now that students have left and classes have all moved online. Manuel Martinez/WBEZ hide caption

March 31, 2020 • Through an ad-hoc mix of videoconferencing, discussion boards and recorded lectures, university students across the city are back in school. 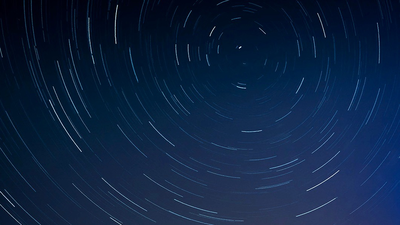 March 31, 2020 • Local astronomers say stargazing can remind you "that there is a universe out there that we're all connected to."