Accessibility links
Report: Stable Housing For Former Prisoners Could Save Illinois $100M A Year A new report says a lack of stable housing leads to recidivism — and that Illinois isn't doing enough to address the problem. 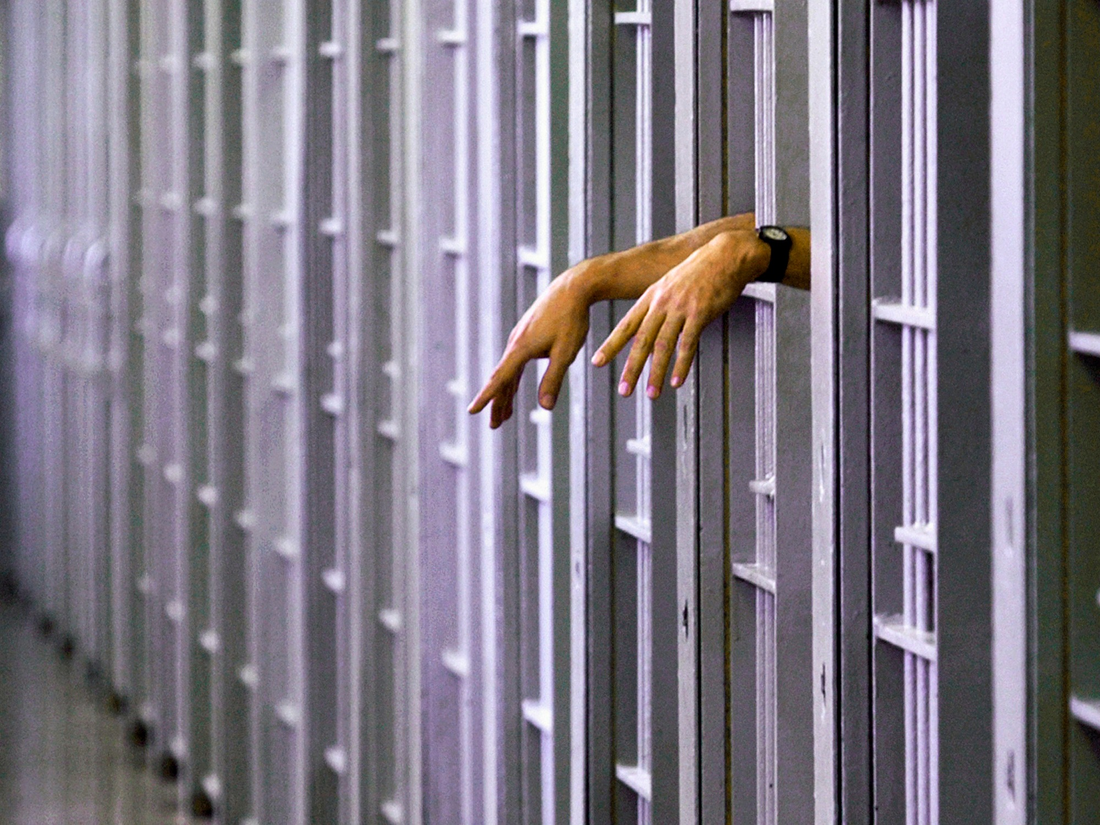 A new study says stable housing is a major factor in whether people return to prison — and that Illinois isn't doing enough to address the problem. Pictured here is an inmate at the Pontiac Correctional Institution in Pontiac, Ill. in 2003. Seth Perlman/Associated Press hide caption

In 2015, Nasir Blackwell left prison after serving 24 years for murder.

During his time there, Blackwell said he became a voracious reader and learner. He earned his associate's degree, helped start a tutoring program and served as a legal advocate for some of his fellow inmates.

Blackwell left the Illinois Department of Corrections more prepared than most to take advantage of his second chance at life.

But he said it was impossible for him to find a place to live on his own.

"Everyone I called ... they wanted to have a background check," Blackwell said. "The background checks [showed] the fact that I was a felon and they never called me back for approval of the application to rent from them. And I just got so frustrated I actually stopped trying."

Even now, four years later, Blackwell said he is still unable to get his own apartment.

But Blackwell is more fortunate than many people who leave Illinois prisons. When he first got out, he was able to stay with an aunt. Now, he lives with his wife and her father.

In between, he lived in transitional housing provided by the nonprofit Inner-City Muslim Action Network, or IMAN, on the Southwest Side of Chicago. Blackwell is now a community organizer for IMAN, and part of his job is to help people leaving prison successfully transition back to normal life.

Blackwell said housing is the biggest issue facing people returning from prison and the most important factor in determining whether they will be successful.

"If you don't have a stable place to live, how can you go out finding employment? What will you tell your employer [is] your place of residency?" Blackwell said. "Housing is the first thing a person needs coming out of prison. ... So it has to start with finding residency and having somewhere to lay your head. That is key. Without that a person's life becomes unpredictable every single day."

According to a new study from the Illinois Justice Project and the Metropolitan Planning Council, making sure people have a place to live when they get out of prison is a huge, unaddressed issue in Illinois, one that's been overlooked even as the state has focused more efforts on preventing people from returning to prison.

According to the state of Illinois, almost 30,000 people return home from state prison each year, and about half of them end up back in prison within three years of being released. That failure to help people stay out of prison is expensive for Illinois taxpayers and disruptive to communities.

A big reason for the failure, according to the study released Wednesday, is that many of the people leaving prison don't have stable housing and the state isn't doing enough to help them find it. The study's authors say fixing the problem would ultimately save the state $100 million per year and could help bring down violence in Chicago. 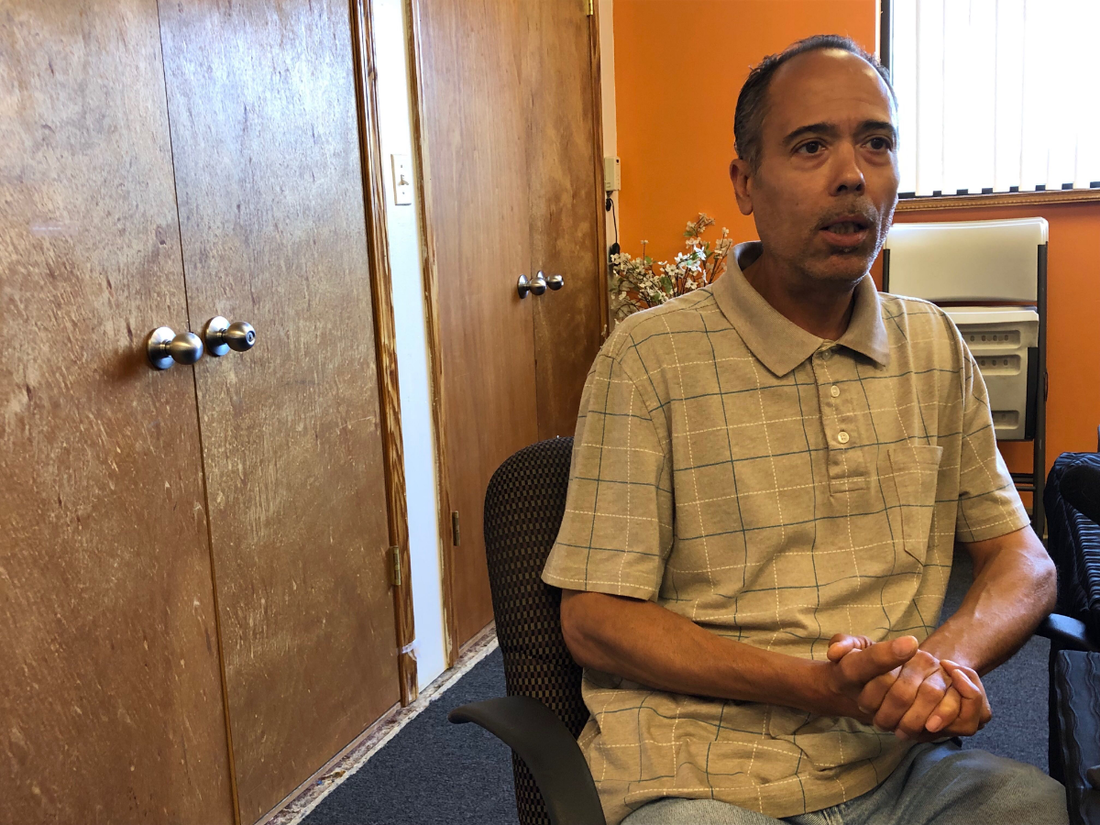 Nasir Blackwell, himself a former prisoner, said housing is the most important factor in determining whether a former prisoner will be successful. Blackwell is seen here sitting in a conference room at the Inner-City Muslim Action Network in Chicago. Patrick Smith/WBEZ hide caption

"The state does not set aside any resources to provide or support housing for those leaving prison or jail," the report reads. "Without [housing], people cannot work or get essential treatment they may need to address mental health or substance abuse issues, causing them to engage in illegal activities and threatening public safety."

King Harris, a senior fellow at the Metropolitan Planning Council and one of the study's authors, said the report backs up common sense.

"If you have to move around week to week to find a bed to sleep on, how does that affect your ability to show up for work on time every day?" Harris said.

In 2016, a governor's task force released a report with more than two dozen recommendations to reduce the state's prison population.

According to that task force report, "the lack of stable housing for newly-released offenders ... contributes to the churning of people through the prison system."

However, the task force did not call for any new funding or programs to address the housing needs of ex-offenders.

Paula Wolff, policy adviser for the Illinois Justice Project, said the state has overlooked the important role housing plays in people being sent back to prison.

"State government actually has the capacity to address this issue. But for years has not thought about how to assist through its own agencies in reducing the recidivism rate in Illinois," Wolff said. "If we can get the [state agencies] to cooperate and support successful reentry, we can dramatically reduce the number of people who recidivate, and also reduce the spending in the Department of Corrections and the entire justice system."

Wolff also stressed how important housing issues are to the ongoing gun violence problem in Chicago, noting that many people leaving Illinois prisons return to a small number of Chicago neighborhoods that suffer from high levels of violence.

Wolff said making sure those people returning have stable housing would make it less likely that they get involved in criminal activity that contributes to shootings.

"The purpose of this report is to address the problem of how to stabilize those communities and help people who otherwise have a very difficult time being able to make a successful reentry into the community," Wolff said.

Harris said one suggestion is already underway at the Illinois Housing Development Authority, of which he is the board chair. Harris said they've announced a small pilot program to give rental subsidies to preselected inmates leaving the Illinois Department of Corrections. In the pilot program, the participants will also be connected to jobs and social services.

Harris estimated the annual cost per participant to be about $17,000. The state of Illinois has calculated that each time an ex-offender is sent back to prison, it costs the state more than $150,000.

"Even divide that by two, say it's exaggerated. That's still $15,000 to $17,000 we spend, versus potential savings of probably $75,000 to $100,000 per individual," Harris said. "And it's not really fair to just focus on dollars and cents. I go back to the lives of the people who are involved. If they successfully reintegrate their lives, what's that worth? What's that cost worth to them? From an emotional, sociological point of view, it's huge."

Still Harris said it won't be possible for the state to provide housing for each person who leaves prison.

The study suggests offering "modest tax incentives and a possible mitigation fund to landlords who are willing to rent" to people leaving prison, and recommends compiling a database of landlords willing to rent to ex-offenders that could be provided to prisoners on their way out.

Harris said a big part of the challenge will be convincing property owners, and the general public, that most ex-offenders are not risky tenants.

"We've got a growing amount of work ahead of us to work with property owners and landlords to convince them that it is safe," Harris said. "That's not going to be an overnight thing but it's going to be a very important thing. I think in the end, if this report really brings this issue out into the open and if there's more public discussion about what's in it, I think we're going to make real progress."