Accessibility links
5 Things To Know About Chicago Public Schools' Budget A good news budget includes repairs across the city, but also pain for schools losing students and major debt for the school district. 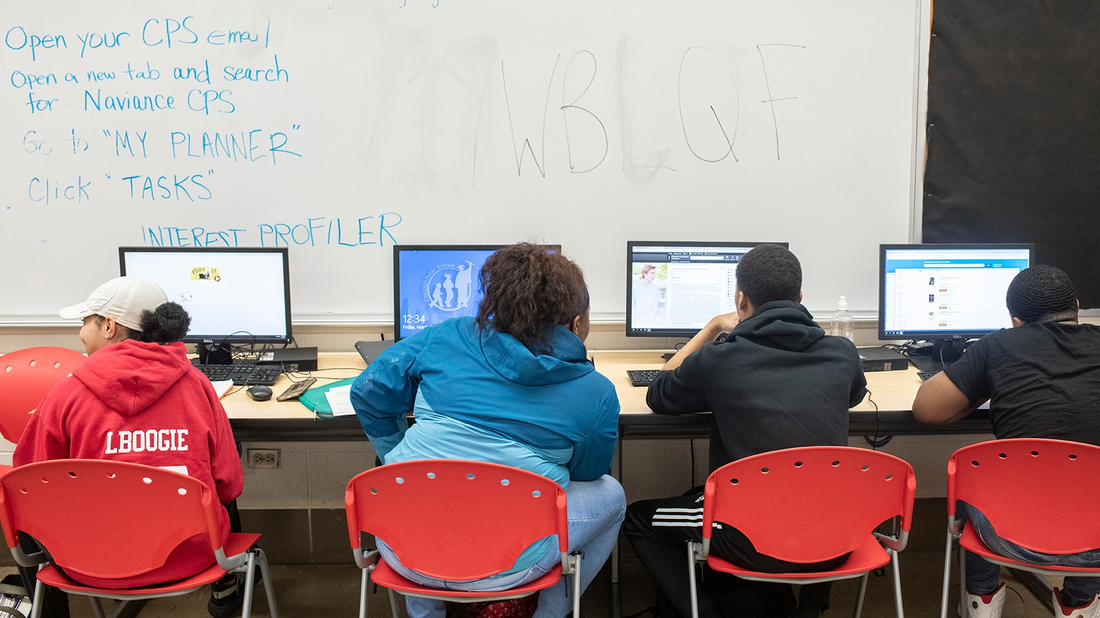 Chicago Mayor Lori Lightfoot and CPS CEO Janice Jackson heralded the new mayor's first proposed budget for the school district earlier this month with great fanfare. But a WBEZ analysis shows the good news comes with some caveats, and it includes some bad news.

Then, on Wednesday, there will be three simultaneous hearings at 6 p.m. on the money CPS wants to use to repair schools and invest in early childhood programs. The hearings are at Morgan Park High School, 1744 W. Pryor Ave; Whitney Young High School, 211 S. Laflin St; and Amundsen High School, 5110 N. Damen Ave.

Here are five things to know about the budget:

Some schools are still suffering

Overall, the school district increased the amount doled out to schools by about $150 million. In district-run schools, much of that money is for expected teacher raises (the budget plans for 2.5% raises in the contract being negotiated, but the union wants more). It also includes money for more preschool programs and for schools getting new specialties like STEM or fine arts.

But many district-run schools are still losing money. The school district continues to tie budgets tightly to student enrollment, so when a school loses population, the school loses money.

Dunbar Career Academy High School in Bronzeville, for example, has to cut teachers in music, social studies, cosmetology and pipefitting. It also is essentially eliminating an office that helps students find apprenticeships and jobs. And Marshall High School in West Garfield Park lost a foreign language teacher and a gym teacher, among others.

As she has done in the past, Jackson gave schools "equity" grants to soften the blow of enrollment declines. Still, 110 district-run schools lost more than $70,000 each. Most of them were majority black schools. Twenty-seven of them were high schools.

Lightfoot has said she wants to spend the next year looking at whether the current per-pupil budgeting system disproportionately hurts certain schools. Lightfoot and Jackson also must grapple with schools that have so few students they can not support robust programming. Jackson and Lightfoot announced plans to spend about $10 million this year to hire about 100 additional nurses, social workers and special education case managers, plus some money for recruitment efforts. It's part of a larger commitment to hire 250 more nurses, 200 more social workers and more special education case managers over the next five years.

But the money for hiring this year is not currently set aside in the budget. CPS officials plan to use money in a contingency budget to pay for these positions, and say they will start opening the positions and hiring soon.

When money isn't in the budget and comes from a contingency budget, it offers less of a guarantee. The Board of Education must approve the transfer, and it's not baked into spending plans for the following school year.

At a news conference announcing the budget, Jackson indicated the decision to make these hires happened at the last minute. "This was a direct result of the listening tour that Mayor Lightfoot engaged in over the last couple of weeks where we spoke directly to teachers, principals, parents, and I can tell you first hand that she was struck by some of the stories," Jackson said. "They needed additional support for some of the other things and issues that come into the classroom every single day. Many of our students have faced trauma, and they need support."

The announcement may have been to try to satisfy the Chicago Teachers Union, which is negotiating a new contract with CPS. The teachers union wants Lightfoot to put agreed-upon staffing ratios in the budget. Lightfoot and her team don't want that in the contract.

Lightfoot and Jackson said the school district will spend an extra $12 million for students learning English. They said this, too, was in response to advocates clamoring for more money. More than 67,600 students were identified as English Language Learners last year, up almost 700 students from the year before and up 29% over the last decade.

But we do know the school district is planning to spend $12 million more from the state's new funding formula on extra bilingual services. This will go to a range of areas, from teacher salaries to tutoring and after-school services. Some of the money also is paying for summer programming this year.

School district officials say this extra money will pay for 112 additional bilingual positions, including money for some bilingual coordinators and coaches. According to the budget, the number of bilingual teachers is staying the same. 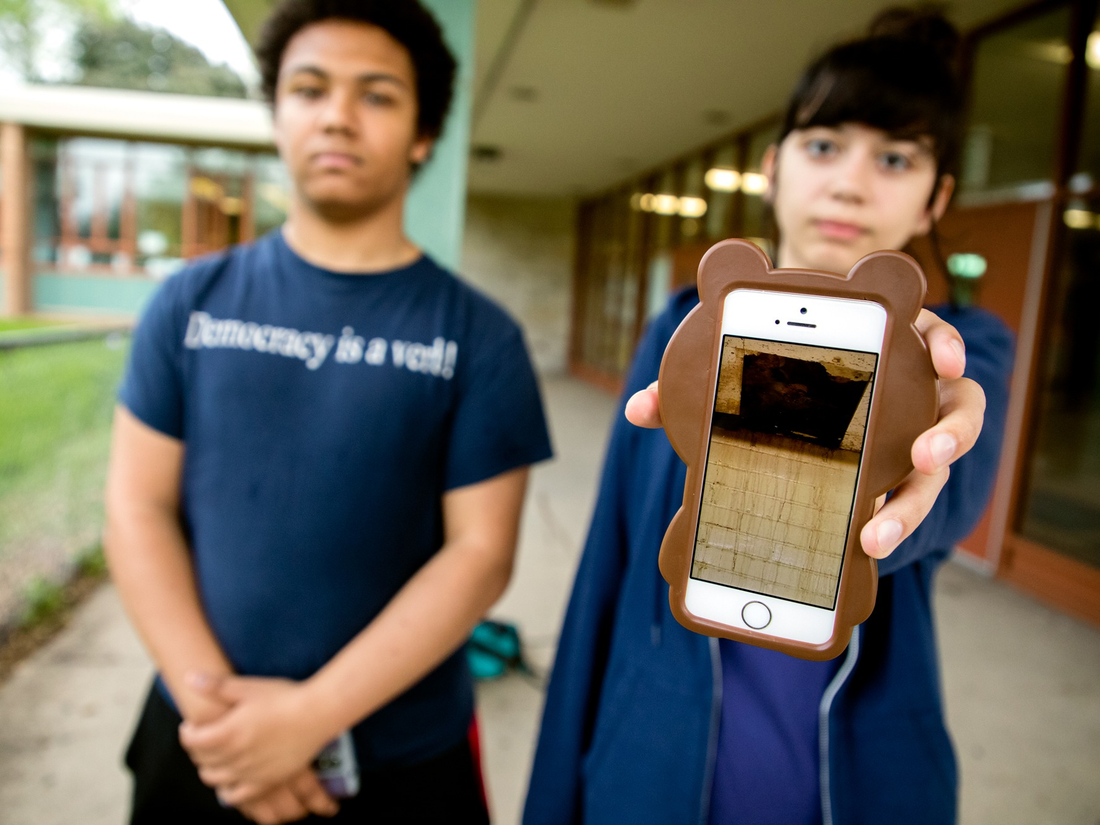 Chicago public schools collectively need billions in repairs. In 2018, this included Washington High School on the Southeast Side. At the time, students shared a picture of what kids called "the Washington waterfall." It was a big hole in the school's roof. Water and tile fell from it, making passing periods dangerous, they said. Andrew Gill/WBEZ hide caption

There's money to make building repairs across CPS, but a lot of it isn't targeted yet

In announcing the budget, Jackson appeared most proud that money to repair and build new schools will be distributed more equitably. In the past, many capital dollars were spent on annexes and new schools in middle-class neighborhoods on the North and Northwest sides, where schools tended to be overcrowded. This left little money for repairs, even as the school district had a growing list of schools that desperately needed fixes.

The school district this year plans to spend $820 million on capital, but only about $227 million in projects are actually named with an amount. A WBEZ analysis shows that schools on the South Side are getting more than half the $225 million. This includes extensive repairs to Morgan Park High School and Earle Elementary in West Englewood.

The North Side also is getting some money, but only a handful of projects are for schools that serve mostly middle-income students. The big ticket items are repairs at Sullivan High School and Kilmer Elementary School in Rogers Park, two diverse schools where most students come from low-income families.

Only 13% of the designated dollars are going to schools on the West Side.

But many schools across CPS will get capital money in other ways. The school district plans to spend $158 million to pay for 243 projects that include new science labs, improving internet connections and such things as stabilizing chimneys and replacing fire alarms. Among the schools getting these projects, 23% are on the West Side, 28% are on the North Side and 48% are on the South Side. While CPS has identified which schools will get this money, it does not indicate how much each one will receive.

CPS is expecting about $200 million from the state for capital projects, but won't allocate that money to specific projects until it is certain. The rest of the $820 million, about $235 million, will go into citywide pots to spend on projects ranging from making schools more accessible and to emergency repairs.

If every dollar flowing into Chicago Public Schools went toward educating students, there would be more than $21,000 to spend per child.

But that is whittled down significantly by the cost of repairing old buildings, making debt payments and contributing to pensions.

The school district has $8.4 billion in long-term debt and plans to carry another $450 million in short- term debt to manage cash flow. For just the long term debt, it will pay more than $700 million this year. That means about $2,000 that could be going into classrooms is instead going to lenders.

Pension contributions also eat into classroom spending. This year, the total amount is expected to reach more than $850 million, with about $120 million coming from CPS operating revenue.

The good news — for CPS, but not necessarily for taxpayers — is that more of these obligations are being paid for from dedicated tax levies. Two years ago, the state allowed Chicago to raise taxes to pay for capital — to borrow to repair schools and build new ones — as well as to pay pension costs.

This story has been updated with the correct date for Wednesday's hearings.