Accessibility links
Spicer, Brazile Will Get $50,000 To Speak At Northeastern Illinois University Some faculty and students say they oppose the invitation to Spicer, who was President Donald Trump's White House spokesman.

Spicer, Brazile Will Get $50,000 To Speak At Northeastern Illinois University

Spicer, Brazile Will Get $50,000 To Speak At Northeastern Illinois University 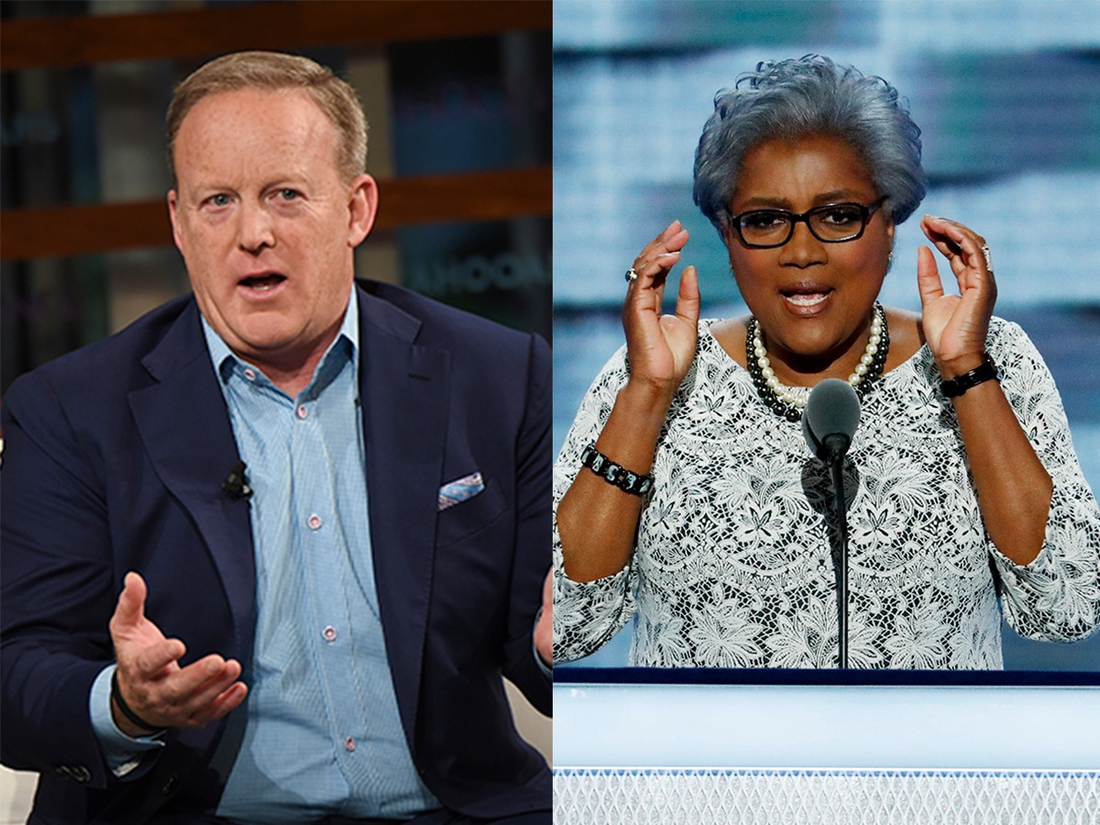 A wealthy alumnus of NEIU donated money to pay for "well-respected individuals" to speak at the Far North Side campus, and that fund will be tapped to cover the cost of Spicer and Brazile's "discussion" there next week on "politics, the press and the presidential election." No taxpayer money will be used, university officials said.

But some faculty and staff at the public university have voiced opposition to the appearance by Spicer, who was President Donald Trump's first spokesman after he took office. He resigned from the White House job a few months later, in July 2017.

Internal NEIU emails obtained by WBEZ show the school's administrators have been conferring privately to figure out how to spin the story and rebut the criticism that surfaced almost immediately.

Spicer and Brazile are scheduled to speak at the university's auditorium at 3701 W. Bryn Mawr Avenue at 7:30 p.m. on Sept. 12. According to the NEIU website, the event already is sold out.

Last week, more than 350 students, faculty, staff, and alumni sent a letter to the university's president, Gloria Gibson, asking her to withdraw Spicer's invitation to the public school with a highly diverse student body.

"Our students ... bear the brunt of the Trump regime's fascist practices and policies," the letter stated. "It would be an affront to humanity to host Spicer at NEIU."

The NEIU Student Government Association also held a town hall last week to discuss the matter. Faculty members and students said they are still weighing how to protest the event and considering holding a teach-in about free speech and Trump's policies the day before.

In a statement Wednesday, an NEIU spokesman said the announcement of the speakers "did elicit a strong response."

"But we anticipate a robust and insightful discussion from two individuals who held top positions in ... their respective organizations and political parties," said the spokesman, Michael Hines. "They will provide Northeastern a unique opportunity for comment and discussion."

"I'm writing to let you know that I am already receiving multiple emails from employees who are very upset by this choice of speakers," wrote Vicki Byard, a professor of English and women's and gender studies.

Ninety minutes later, Byard wrote a longer message to Gibson. She wrote, "Most are viewing Sean Spicer not as an individual but instead as Trump's mouthpiece/representative. Given the divisiveness of the current political climate and the lead-up to the 2020 elections, they think having Spicer on campus will make students (especially those with oppressed identities) feel unwelcome and unsafe."

Gibson had signed the $50,000 deal with Spicer and Brazile on Aug. 15, records show. The contract does not indicate how much of that fee each of the two speakers will get, and the agent in New York who crafted the deal with NEIU declined to comment.

NEIU is also on the hook to pay for hotel accommodations for Spicer and Brazile, according to the contract.

Right after the announcement of the event, NEIU's top public-relations aide, Michael Dizon, began an online discussion with other administrators "to make sure that when we have to defend the lecture — and trust me, we will — that we're all singing from the same hymnal."

Dizon suggested references to the universities that event moderator Phil Ponce had attended be deleted from promotional materials. "The event is supposed to bring attention to Northeastern, so I don't like to share the spotlight with Indiana and Michigan if we can avoid it," Dizon wrote.

In another email, Dizon noted to Gibson and other administrators that Spicer will be a contestant on the ABC show "Dancing with the Stars" in the upcoming season.

Dizon also told Gibson he had conducted a search and found Spicer had appeared at three campuses — the University of California Berkeley, University of Massachusetts Amherst and Liberty University — but had not inspired anything worse than a "small rally" and "some hecklers" at one of those schools.

Another university official, Christie Miller, replied, "I think the Sept. 12 event is designed to represent both sides of the political spectrum and will do just that."

Brazile was campaign manager for Democrat Al Gore's losing 2000 campaign for president, and quit her job as a commentator for CNN in 2016, after it was revealed that she had leaked questions for CNN-sponsored candidate events to Hillary Clinton's presidential campaign. She joined Fox News in March.

For years, NEIU leaders have sought to draw attention to their relatively obscure school by inviting prominent speakers to campus, at a high cost.

In the middle of a budget crunch a couple years ago, the university agreed to pay a $30,000 fee for a speech by Valerie Jarrett, who was a top aide to ex-President Barack Obama.

After that deal drew criticism, Daniel L. Goodwin — an NEIU alum who is a real-estate executive — allowed the university to pay for Jarrett's fee out of a $300,000 speakers' fund he endowed in 2014. Jarrett ultimately gave back all but $1,500 of what she was promised, the Chicago Sun-Times reported.

University officials say Goodwin is covering the cost for Spicer and Brazile to speak there.

But NEIU has been virtually alone among the state's public, taxpayer-funded universities in paying such high amounts to speakers.

And like many public universities in Illinois, NEIU is still recovering from the state budget impasse that caused the school to cut staff and close for a few days to save money. Enrollment has dropped by 17% since 2013.

"A lot of students were just concerned and worried," said graduate student Melanie Glover. "They were just wondering, 'Why him versus other people?'"

Brett Stockdill, who has taught sociology at NEIU for 16 years, said he's heard from Chicago Public Schools teachers who are reconsidering their decision to encourage students to apply to Northeastern because of the event.

"That makes sense to me," he said. "Why would a black student, a Latinx student, an immigrant student, want to come to a university that has caused such callous disregard for the things that are causing them harm on a daily basis?"

For Stockdill, the large sum of money going toward this event stings.

"I think about all the things we could do with $50,000," Stockdill said, rattling off a list of student support programs that need funding.