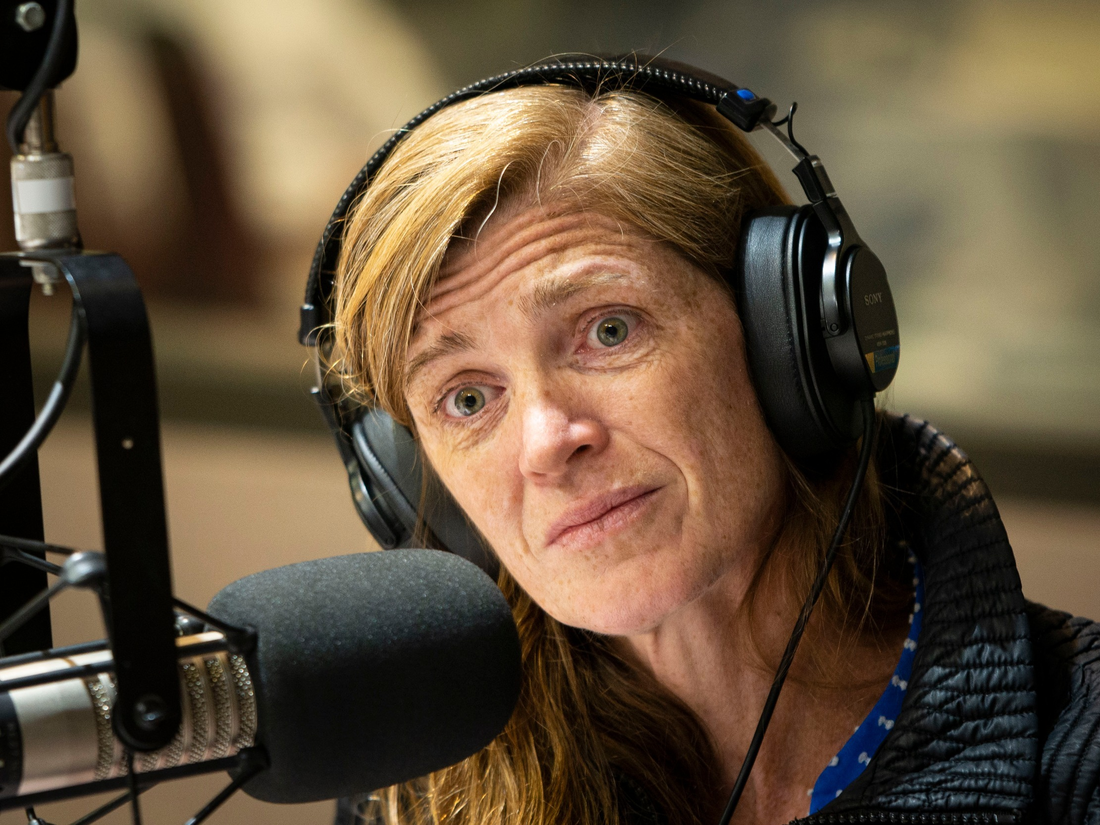 Former U.N. Ambassador Samantha Power talks about her life's journey and her varied jobs on 'Reset' with Jenn White. Power is on tour supporting her memoir 'The Education of an Idealist.' Jason Marck/WBEZ hide caption

Former U.N. Ambassador Samantha Power's new memoir The Education of an Idealist reflects on her ability — and sometimes, frustratingly, inability — to influence U.S. policy during her time in the Obama administration.

She stopped by WBEZ's Reset to talk about learning to navigate the halls of power, serving as U.N. ambassador and the condition of the diplomatic corps under President Donald Trump.

On learning the realities of Washington

Power: We had promised that we were going to recognize the Armenian genocide, and so I just tell the story in the book of pushing water uphill and being all alone in these meetings as others were understandably again looking at the Turkey relationship and not wanting to rock the boat. ... It led to a very tense discussion where [President Obama] gave me his logic which actually was rooted in trying to make peace between Turkey and Armenia and believing that it would be very disruptive in the moment. I believe the logic was completely flawed.

It was crushing. It was so upsetting, also, to feel like the process hadn't been quite right, that we hadn't had time to really deliberate, but it was also a rude awakening. That's Washington, and given the vast number of issues the president is thinking about every day, you don't always get in to get to make your case.

On her approach to diplomacy as U.N. ambassador

Power: One of the things I did when I became U.N. ambassador is ... I visited the ambassadors of the other 191 countries within the U.N., and I did so simply to show America's respect. We're the host country, we're the richest country in the world, we're the most powerful country in the world and we have a lot of influence at the United Nations. But it was amazing, like 50 of these ambassadors had never been visited by a U.S. permanent representative, and they'd come out in their Sunday best or they'd be ... weeping at how much it meant ... to be visited by a cabinet member ... I thought, "My gosh, this is so easy" ... to put capital in the bank that you can then draw upon when you want a colleague to take a tough vote on LGBT rights or on Russia's invasion of Ukraine, but beyond that, to make an individual representing a small country or a poor country feel that America sees their dignity too.

On the Trump presidency's impact on the diplomatic corps

Power: I tell the story in the book of the morning after the election, gathering my civil servants and foreign servants ... I had assumed that they would all want to make for the exits. ... One after the other, at this town hall a couple days after the election just stood up and said, "We're staying. We know [Trump] doesn't have a lot of expertise around him, that foreign policy hasn't been something that he's been involved in. We want to be here." I was so moved by just the patriotism and the sense of 'We serve the country, we don't serve any one person.'

Unfortunately now, nearly three years in, half of those people have just felt that they were so irrelevant or so dismissed in the course of trying to offer advice that they've left the foreign service.

On why her book "isn't the typical Washington memoir"

Power: Living with the Trump administration ... made me think a lot about political activation and made me realize how many students, how many young people ... have never wanted more to get involved because of the current circumstances but feel a bit daunted. ... I thought, "Gosh, you know, I felt like that so many times ... that I would like to try to do something that makes things better somewhere, but how do I do it? I'm just one person." And so I took a very different approach to the memoir than I had intended, than other government officials tend to, and went back and really opened up those doubts and those insecurities ... as a way of showing not how I became less idealistic when I got into the belly of the beast, but rather how I learned to be more effective in pushing a human rights agenda, in pushing for humanitarian objectives and then pushing frankly for the interests of the American people for American interests, even narrowly defined.